Nov. 11 — An emergency rally and march against the Nov. 10 right-wing coup in Bolivia that forced President Evo Morales to resign took place in New York City on one day’s notice. Over 200 activists gathered at the Bolivian Mission to the United Nations on Second Avenue and then marched to Trump Tower on Fifth Avenue in midtown Manhattan for a rally. The crowd chanted, “Evo, amigo! El pueblo está contigo!” (Evo, friend! The people are with you!) 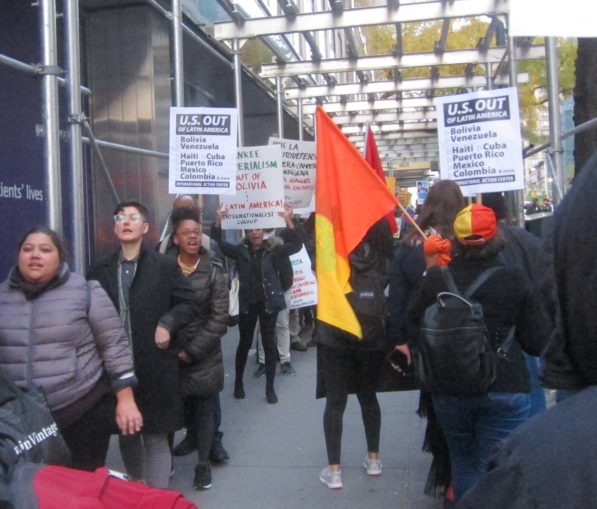 Marches and rallies are being held throughout the U.S. and globally in solidarity with Evo Morales and his party Movement Toward Socialism and against the U.S.-backed coup.

Sara Flounders, speaking on behalf of the IAC at the New York rally, emphasized: “Our unity is the most powerful response. It is the weapon that has enabled the movements in Latin America to survive and rebound time after time. We need to know and be confident that resistance in Bolivia is continuing right now. This struggle isn’t over. What is Evo Morales and the Movement Toward Socialism’s great crime? They united the poorest, most oppressed, the Indigenous against the capitalist class. Their unity won real gains. Our solidarity here and across the country and throughout Latin America matters.”