The center of La Paz has been transformed into a scenario of barricades, lines [of shoppers at] the few businesses that are open, halted transport, neighbors at corners crossed by barbed wire and zinc sheets. Near Plaza Murillo, the center of political power, groups pass by wearing helmets, shields, gas masks, Bolivian flags. Police contingents hover and ask for reinforcement from the National Armed Forces (FAB). 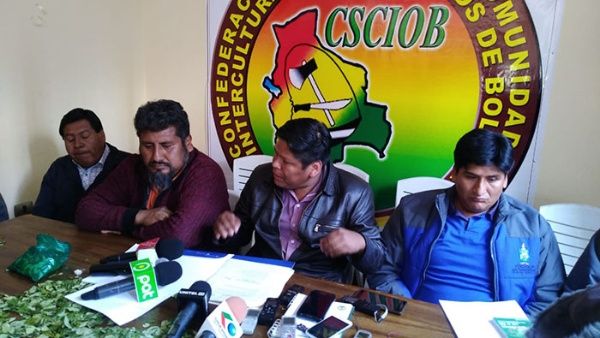 On Nov. 11 the Trade Union Confederation of Bolivian Intercultural Communities called for a permanent mobilization against the coup attacking the country and President Evo Morales. Spokesperson Henry Mamai said, ‘Compañeros, this is the moment to unite, to defend our rights. We call for a mobilization in defense of democracy.’

It is Monday night [Nov. 11] and fear spreads: that the city of El Alto [an Indigenous stronghold] will descend. The scenes seen during the afternoon reminded many in central and southern La Paz that the half of the country that voted for [President] Evo Morales exists and will not stand idly by.

What was thought would happen in El Alto did happen, and thousands of neighbors, mostly from the Aymara Nation, took to the streets to confront the coup d’état, to defend the process of [economic and social] change, and a deeper thing: the wiphala flag, which during the hours of the coup offensive was removed from institutions and burned in the street by right-wing demonstrators. [The wiphala flag represents some of the Indigenous peoples of the Andes.]

What happened was not part of the plan of those who lead the coup d’état, which, at this time, presents more elements of confusion and violence than of a planned project. One element is clear: The main objective was to overthrow Evo Morales and persecute him, as he stated when he announced that an officer of the Bolivian National Police (PNB) has an illegal arrest warrant [for] him. He is now in an unknown place.

Morales’s situation was uncertain last night. Mexico’s foreign minister, Marcelo Ebrard, announced that the former president was on a plane which would take him to that country.

His personal safety is a matter of great concern in a context where his house was assaulted by violent groups and where there is no government authority among those who carried out the coup. The rule of law has been broken, and that has opened the doors to absolute impunity for those who are able to exercise power.

During the day, Morales sent messages from his Twitter account to denounce the repression in El Alto that claimed several lives, including that of a young girl, and to ask people not to engage in confrontations “among brothers.” At night before boarding the plane, he tweeted: “Sisters and brothers, I am leaving for Mexico, grateful for the generosity of the government of that fraternal people who gave us asylum to protect our lives. It hurts me to leave the country for political reasons, but I will always be vigilant. Soon I will return with more strength and energy.” The proposal for asylum in Mexico will be a possible way out for the overthrown and endangered president.

In Bolivia, the coup bloc has not yet been able to form a government. After the resignation of Evo Morales, both Vice President Alvaro García Linera and the president of the Senate also resigned. The second vice president, Jeanine Añez [an opposition politician and the Senate minority leader], should be next in line.

So there is no interim coup government visible after more than 24 hours of completing the coup d’état. On the other hand, there are powers that are deployed in repressive and persecuting actions, through announcements in the social networks of Fernando Camacho, who is the visible face of the civilian wing of the coup, and the actions of the PNB and the FAB.

The FAB issued a communiqué Monday night [Nov. 12] [authorized by] Commander General Williams Kaliman: The FAB will deploy units in the streets to accompany the PNB. There is no formal government, but there is the power of arms.

The scenario is not the one foreseen by those who led the coup d’etat. The question is really: Did they have an organized scenario beyond overthrowing and persecuting Morales and the leaders of the process of change?

The coup bloc is heterogeneous; it contains civilian, business, police, military, religious and international sectors. This last dimension was expressed by the complicity of the Organization of American States, which did not qualify what happened as a coup d’état, and in the declarations of the United States, which presented the overthrow as a return to democracy.

The conjunction of forces that achieved the coup seems to have a clear objective: to head off the process of change, from its civil servants to its political leaders. That has translated into persecution, as evidenced by asylum applications in embassies, especially in Mexico’s Embassy.

The people push back

There is then an instability within those who led the offensive, as well as a reaction that is set in motion, not only in El Alto — with its strong level of radicalism — but in various parts of the country.

Thus, for example, the Trade Union Confederation of Bolivian Peasant Workers (CSUTCB) announced blockades throughout Bolivia on main roads — “general resistance to the coup d’état throughout the country” — as well as the expulsion of leaders who became part of the coup.

The situation is more unstable than the promise sold by Camacho and those who celebrated on Sunday afternoon and night, Nov. 10. There is a country that they denied, despised, despite their efforts to appear democratic and inclusive, and that country began to move, to challenge, to confront the conservative restoration that seeks revenge.

For the moment, there is no visible leadership of the resistance processes. What is clear is that the decision of those conducting the coup will be to respond with repression on every possible scale. Already on Monday night you could see the tanks in the streets of La Paz. The people who celebrated the overthrow and burning of wiphalas now applaud the militarization.