Nov. 12 — From La Paz, journalist Marco Teruggi writes that 24 hours after the U.S.-backed coup in Bolivia, “There is no formal government, but there is the power of arms.” (pagina12.org) Police and soldiers patrol at the behest of the coup leaders, while fascistic gangs roam, beat and burn, the coup having “opened the doors to absolute impunity for those who are able to exercise power.” But, Teruggi adds, “[The] half of the country that voted for [President] Evo Morales exists and will not stand idly by.” Formal and informal organizations of Indigenous peoples, campesinos and workers are blockading roads, setting up self-defense units, and calling for “general resistance to the coup d’état throughout the country.” (Follow more coverage at workers.org, including English translation of Teruggi’s on-the-ground reporting.) 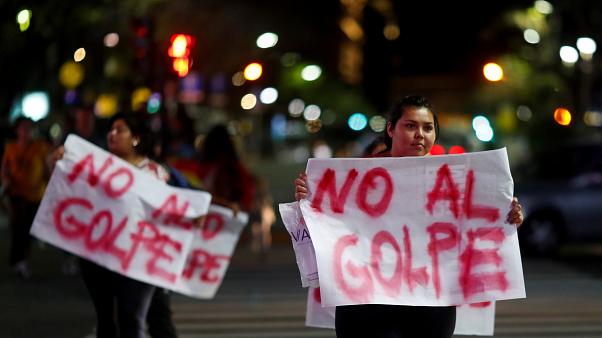 Bolivians say: ‘No to the coup!’

Nov. 11 – In a message from his base in the Chapare region in central Bolivia, President Evo Morales said on the evening of Nov. 10: “I want to tell you, brothers and sisters, that the fight does not end here. We will continue this fight for equality, for peace.” (Al Jazeera, Nov. 11)

Earlier that day, a fascist-led coup backed by the Bolivian police and military, and receiving the full support of U.S. imperialism and its lackeys in the Organization of American States, had forced Morales to resign from office.

Fascist gangs had been moving toward La Paz, Bolivia’s administrative capital, from their anti-Morales strongholds in the east of the country. Since Oct. 20, when Morales won re-election, these gangs have attacked and beaten pro-Morales elected political leaders, burning their homes and offices across the country.

Immediately, the imperialist-controlled media worldwide tried to give their unanimous spin to the event, slandering the Morales government and its Movement toward Socialism (MAS) party, and charging it with electoral fraud, even though no evidence was ever given. Reporters repeated the lies of those who led the coup — ultra-rightist Fernando Camacho and former president and servant of the oligarchy, Carlos Mesa — to confuse the people of the world and accuse the MAS government of illegal activities.

Progressive governments, organizations and media worldwide have begun to fight back against this counterrevolutionary offensive. They have given priority to mobilizing to defend the life and liberty of Morales and those in his government.

They are also exposing the lies of the coup-makers, showing that what happened was a fascist takeover with the collusion of the police and military — and imperialist backing — that has crushed all democratic norms in Bolivia. The charge of electoral fraud is a phony pretext for the coup.

The Mexican foreign minister, in addition to denouncing the coup in Bolivia, has offered Mexico’s Embassy in La Paz as a secure place for persecuted Bolivian politicians to seek asylum. Already about 20 members of MAS are there.

In the United States, numerous anti-imperialist and anti-war organizations are supporting emergency demonstrations on Nov. 11 — for example, one in New York City at the Bolivian Consulate — to protest the coup. Workers World Party issued a call to its members and friends around the country “to support any demonstrations defending the life and freedom of Evo Morales and other members of his government and protesting the U.S.-backed coup in Bolivia.”

Why the rich hate Morales

Evo Morales was the first Indigenous person to become Bolivia’s president. First elected in 2006, he was in charge of this pluri-national country until Nov. 10. Some 55-60 percent of Bolivia’s 11.6 million people are Indigenous.

Bolivia’s tiny oligarchy of super-rich, mostly of European descent, have imposed an ideology of anti-Indigenous racism that is now aimed at Morales. Naturally, the rich also hate him for his policies. Over the last 13 years, the MAS government has used some of Bolivia’s wealth to lift 20 percent of the people out of abject poverty. But the rich want it all for themselves.

Morales also joined Venezuela, Ecuador, Cuba and Nicaragua to establish Latin American organizations that allowed some economic sovereignty, instead of being subservient to U.S. and EU imperialism. In 2008, he stopped sending Bolivian Army officers to the infamous “School of the Americas,” where the U.S. trained them in repression. These steps, along with MAS’s nationalization of what had been big profit centers for imperialist-based monopolies, made Morales a target of U.S. imperialism.

Long before the Oct. 20 vote, the Bolivian right wing made it clear they would not respect the results of the election. Their coup had nothing to do with electoral fraud, which was never proven. Even an OAS declaration on Nov. 10 — which was issued two days early in order to pile on pressure for Morales to resign — vaguely referred to “irregularities” and not fraud.

Immediately after the Oct. 20 election showed that Morales had won another five-year term, Bolivian counterrevolutionaries, from their bases in eastern cities like Santa Cruz — stronghold of coup leader Camacho  — mobilized fascist gangs. They marched toward La Paz, their “shock troops” wearing head masks as they beat people and torched homes, including the house of Morales’s sister.

In La Paz these gangs took to the streets and fought to wrest control of public places from the government’s supporters.

Above La Paz is the city of El Alto, a nearly 100-percent Indigenous city more than 13,000 feet above sea level. It is a stronghold of support for the government. Reports and videos showed tens of thousands of people in the streets supporting Morales, including Indigenous organizations and the Confederation of Bolivian Workers.

By Nov. 8 and 9, elements of the police had not only refused to stop the fascist gangs from destroying parts of La Paz, they had joined the gangs.

On the morning of Nov. 10, the Army clarified its position. General Williams Kaliman, the top commander of the Bolivian Armed Forces, “suggested” to the president that he resign his mandate. The threat was clear.

While the scenario might differ from a classic army coup in which the officers order their troops to seize the government, it is still a fascist coup based on anti-Indigenous racism, financed by the oligarchy and by imperialism, and supported by the police and the army.

Demonstrations Nov. 11 in New York City and elsewhere will underscore that every progressive person and organization should condemn the coup and defend the lives and freedom of Evo Morales and other MAS leaders, in solidarity with the people of Bolivia.

Workers World has covered these events in more detail online, mainly in translations of articles by Marco Teruggi, which are available at workers.org.