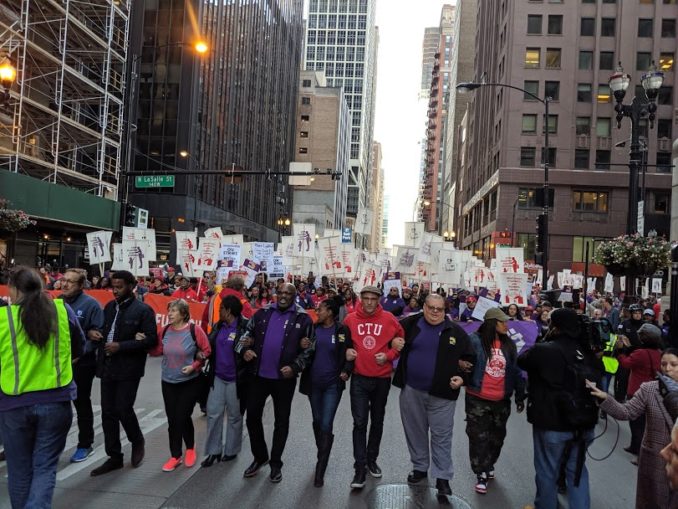 “Did we accomplish every single little thing?” said Jesse Sharkey, president of the Chicago Teachers Union, during an Oct. 31 victory press conference. “No. But I can say that we moved the needle on educational justice in the city.”

And that was the point of the 11-day strike (beginning Oct. 17 and ending Oct. 31) at the country’s third-largest public school system with nearly 400,000 students, the majority in poor Black and Brown families.

The 25,000 teachers represented by the Chicago Teachers Union, Local 1 of the American Federation of Teachers, and 7,500 education support staff in Service Employees Union (SEIU) Local 73, neatly summed up their vision of “social justice unionism” by fighting for “smaller class sizes, fair pay and benefits, fully staffed supports, and justice for families.” (ctulocal1.org)

The hard-fought, five-year $1.5 billion contract includes a 16 percent pay raise for teachers and a long-overdue 40 percent raise for teaching assistants, clerks and other lower-paid workers.

Over $35 million will be devoted to shrinking oversized classrooms, prioritizing schools with the most at-risk students (read “segregated”), and hiring a full-time social worker and nurse in every school. The city agreed to pay education workers for five of the days they were out during the strike.

However, the contract does not include a clause for “affordable housing,” which the teachers raised because about 17,000 Chicago Public School students are homeless — a problem linked to the city’s persistent poverty and racial segregation. Mayor Lori Lightfoot promised to take on the issue, though not in the CTU contract.

‘Bargaining for the common good’

To be able to win such a progressive contract, the highly organized union put the slogan “bargaining for the common good” into practice. The CTU is led by the left-leaning Caucus of Rank-and-File Educators, which grew out of CTU’s groundbreaking 2012 strike. Sharkey proudly told the Nov. 1 Chicago Sun Times that the teachers “showed the city what it means to care, to put yourself forward, sacrifice and achieve something.”

A vital part of the union’s winning strategy was putting participatory democracy into practice. The House of Delegates, with elected representatives from nearly 700 schools, met repeatedly to prepare before the strike. Delegates were given work plans to help them organize daily pickets at every school, which totally depended on rank-and-file participation. And delegates met often during the strike to learn about the day’s negotiations and to reinforce the fighting will and spirit of the bargaining team.

No wonder there was a massive turnout, despite drenching rain and snow, for the union’s march and rally on Oct. 25. As they marched tens of thousands strong, teachers, staff and union allies joined in chanting, “If we don’t get it, shut it down.”

“I solemnly swear that I will never stop fighting for my students” read a handmade picket sign carried that day. “[That] sums up what makes the teachers’ strike so important,” wrote Sarah Lazare in an Oct. 29 article from In These Times, “Chicago Teachers Are Carrying the Torch of Decades of Militant Workers Struggles.”

CTU’s winning strategy was firmly rooted in traditional “working-class organizing.” Contrast that with how the United Auto Workers conducted its concurrent 40-day strike. While UAW convened its House of Delegates for discussion of the tentative agreement, the union leadership did not involve the delegates on a day-to-day basis.

In a WW article about the UAW struggle in this issue, Martha Grevatt points out how the UAW forgot its working-class roots, based in the strong Flint sit-down strike in 1936-37, after the 1950s’ anti-communist Red Scare that pushed progressives out of unions. (See more about the UAW strike in October WW articles by Grevatt.)

Lazare traces some of the history of fighting for “workers power” to the Industrial Workers of the World, founded in Chicago in 1905, which called for one big union regardless of industry, trade or craft, gender or race. The first example she cites is the successful 1912 strike in Lawrence, Mass., textile factories, known as the Bread and Roses strike, led by mainly women workers from 51 countries.

A strong example of worker power also comes from the multinational International Longshore and Warehouse Union, founded during the 1930s, which spoke out against the internment of Japanese and Japanese-American people during World War II.

The long history of the ILWU includes its Local 10 protest of apartheid when it refused to load or unload South African cargo in 1984; 10,000 ILWU members shutting down 29 West Coast ports in 2008 to protest U.S. wars in Iraq and Afghanistan; and Local 10 closing the port of Oakland, Calif., in solidarity with the Black Lives Matter movement in 2015.

As the UAW strike was drawing to a close and the CTU strike was going full throttle, an article in the Oct. 28 In These Times estimated that at least 85,000 workers participated in 13 different U.S. strikes the week of Oct. 21. The article traces the march of education worker strikes in recent years, from West Virginia to Los Angeles, to the CTU victory in 2012.

While the teachers’ victory, which serves the huge multinational working-class community of Chicago, deserves to be celebrated throughout the U.S. and the global working-class movement, right-wing naysayers have denounced the generous contract.

But as Stacey Davis Gates, CTU vice president, told the Nov. 1 Chicago Sun Times, “In comparison to the rest of the state, we still have less staff. … [W]e’re at the minimum. So to hear discussion arise about ‘Oh, my God. It’s gonna cost too much money.’ No, quite frankly, it should be costing a lot more money.”