The writer is of African descent from the United States, currently living in Quito.

For more than 10 days at the beginning of October, Ecudorians across the nation revolted against President Lenín Moreno’s austerity Decree 883 announced to satisfy part of the U.S.-based International Monetary Fund’s loan conditions.

As part of a $4.5 billion loan agreement with the IMF, the Moreno administration agreed to slash government spending, reduce labor protections, and in essence, subject the Ecuadorian people to yet another failed neoliberal experiment. Under Moreno’s tenure the government has fired thousands of public sector employees and reduced social spending, leading to over 400,000 unemployed, and reducing the number of people making a living wage to under 40 percent.

The latest round of austerity in the 883 decree, which included elimination of the fuel subsidy, proved to be the last straw for the Ecuadorians.

To give a perspective of how much misery this decree was set to inflict, imagine if the price of a gallon of gas in the U.S. rose from $3 to over $5 overnight. In Ecuador, not only the cost of travel but of every commodity transported to market began to rise in the days following the decree. Since just over a third of the population here earns a living wage, for a broad swath of the people the decree meant starvation.

President Moreno announced the decree on Monday, Oct. 1, and the transit workers union called a strike the next day. Taxis and buses stopped and workers barricaded the main roads leading in and out of major cities throughout the country, including the capital Quito. That evening black blocks and groups of protesters, composed mainly of students, began trying to take spaces throughout the city.

The police began to crack down heavily with copious bombardments of tear gas and flashbang grenades. When the transit union called off the strike that Friday, Oct. 4, the protests continued and the Indigenous movement began to mobilize. 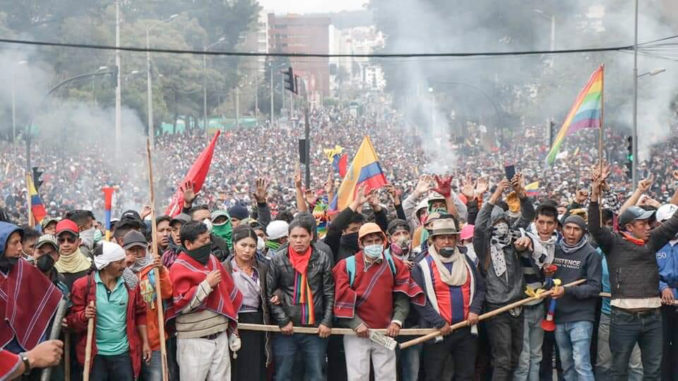 Tens of thousands of Ecuadorians protest pro-IMF policies of Moreno in Quito, Oct. 9.

Indigenous communities had been in the streets since the proclamation of the decree. When the president declared a state of exception, essentially declaring martial law, Indigenous communities declared their own state of exception, barring police and the military from entering their territories and reinstating their traditional systems of justice. By Oct. 4, tens of thousands of Indigenous people were on the march from their rural territories to major cities across the country, with the bulk of people converging on Quito.

When the first groups began to arrive on Monday, Oct. 7, the government evacuated the capital for Guayaquil near the country’s Pacific Coast.

Indigenous women marched hundreds of miles from the valleys to the capital of Quito, over 9,000 feet above sea level in the middle of the Andes, with their children strapped to their backs, along with all their essential belongings. The network of solidarity that sustained the over 10,000 Indigenous people arriving in Quito was marvelous. Universities, which had suspended classes, repurposed themselves as soup kitchens, clinics and shelters, using whatever vacant property they had to house people. During the day volunteers cooked, cleaned dishes and sorted through the flood of donations of clothes, toiletries and necessities nonstop.

The siege of Parque Arbolito

Parque Arbolito, on the edge of Quito’s city center and blocks away from the National Assembly, was turned into a forward operating base for the movement, with the park’s cultural center, which served as a shelter during the night, being converted into the Indigenous assembly during the day. Speeches were made to rally groups before a march, and Indigenous leaders publicly debated strategy and tactics while issuing accords as to the next steps.

The park has a long history of Indigenous struggle, and in the previous revolts that ousted three presidents prior to Rafael Correa, it was a safe zone where it was understood that police would not attack. For this reason many of the elderly and children, including infants, took up shelter there.

On the night of Oct. 9, under orders from President Moreno, Minister of Government María Paula Romo and Minister of Defense, alleged torturer and School of the Americas alumnus, Oswaldo Jarrin, the police brutally attacked Parque Arbolito with officers on horseback and motorcycles charging through camps and crowds. Still other officers launched tear gas and flashbang grenades from armored personnel carriers.

When people fled, carrying their babies and shepherding their older children to the nearby Catholic university which had opened its doors as a shelter, the police continued to chase them. Police fired tear gas over the walls of the university and into buildings housing women and children who had just been assaulted at Parque Arbolito. According to social media reports, at least one infant died of asphyxiation.

The assault continued throughout the night, as bombs could be heard exploding until sunrise. At one point early that morning Indigenous groups were able to retake the cultural center at Arbolito and detained six police officers. They then negotiated a ceasefire with the government mediated by the U.N.

The Indigenous groups returned the officers to the assembly after making them carry the caskets of two Indigenous youth. One of these youths was a leader from the Andean region who, according to his family, had been trampled to death by police horses. News of the capture reinvigorated the movement throughout the day and people were able to rest that night, free from attacks by police.

The ceasefire was a turning point for the movement, and though the police continued their attacks on Arbolito in subsequent nights, the victory had strengthened the Indigenous movement’s resolve and prepared it for the depraved viciousness of the Moreno government in its attempts to crush the uprising. However, the movement needed to expand in order to survive the onslaught.

The feminist movement, the strongest social movement in Ecuador aside from Indigenous peoples, held a solidarity march Oct. 11, which wound through the middle-class neighborhoods surrounding Parque Carolina. Up to that point these areas were not confronted with the uprising in the streets, and in fact had hosted a small rally in support of the government and its plans.

That night entire neighborhoods across the country decided to defy the government’s curfew and took to the streets in an enormous show of solidarity with the Indigenous people who had been in the front lines in Quito. The “caserolazo,” a traditional form of protest in Latin America where people bang pots and pans in the street, showed the government that the movement was growing to revolutionary proportions. The government entered negotiations with the Indigenous movement and dropped austerity Decree 883 the next day [Sunday, Oct. 13].

In the official census, only about 7.5 percent of Ecuadorians identify as Black. There are a number of other categories that one can self-identify as which indicate African descent. It appears that only those whose dark complexion prevents them from escaping being identified as “negro” will self-identify as such. Others with lighter complexions will choose other designations such as “afrodescendiente” (African descendant).

Because of the nature of colorism in Ecuadorian white supremacy, this lighter color also correlates to those who avoid ending up in the prison population and those who don’t. “Negros,” that is, Blacks, are overrepresented in prison by up to four times, while “afrodescendientes” are actually underrepresented. If the one-drop rule of U.S. white supremacy were applied to Ecuador, Black people would make up about 37 percent of the population.

What this amounts to is an immense invisibilization of Black people. Many media sources rarely report on race except in relation to crime. Similarly, during the revolt, no coverage was given to Black communities in the country that rose up and played a significant role in pushing the government to retract its austerity package.

Valle Del Chota is one of the largest Black communities in the Andean region. Populated by descendants of African slaves brought by Jesuit traders to work in the church’s sugar cane plantations, it is now a vital entry point for commercial goods coming from Colombia, whose major border crossing is just to the north of the valley. When the community barricaded this major transport road during the general strike, it represented a major loss in commercial activity to the government. Yet no major outlets reported any uprising of the Black community there.

Similarly, in Manabi, the southern part of Ecuador’s Pacific Black belt, which extends all the way north to Panama, the movement blocked off bridges and roads serving as major choke points to major cities. The local, mainly Black population, maintained the barricades, and yet again, no major news outlets reported the activity.

Just north of Manabi, in Esmeraldas, where major oil refineries are located, social media reports indicated that major roads were also barricaded, representing a blow to the oil revenue of the government.

In another Black invisibilized space, El Inca Prison, in the north of Quito, prisoners also rose up in revolt during the general strike. According to members of the prison abolitionist organization, Mujeres De Frente, three people were killed by security forces putting down the revolt and another three died later of their injuries. This would bring the state’s official death toll of 10 up to 16 — if it were ever reported on and accounted for by government officials.

It’s true the Indigenous movement was the most visible actor in the “paro,” or general strike, and faced the brunt of state repression in Quito. Still, Black communities across the country also rose up and proved that not only were the Black people of Ecuador in revolt, but that they were a powerful and organized force to be reckoned with. Indeed the leaders of the national Indigenous council (CONAIE) recognized this in their negotiations with the government.

Perhaps the next time Ecuador’s Black community rises up in revolt, Black leaders will actually be able to take a seat at the negotiating table themselves.