The Venceremos Brigade has been sending volunteers annually to revolutionary Cuba since 1969. Brigadistas work alongside the Cuban people to learn about the gains of the Revolution and to challenge the 1963 travel ban prohibiting U.S. citizens from going to that country. This year is the 50th anniversary of the founding of the oldest Cuba solidarity group, which has international participation. 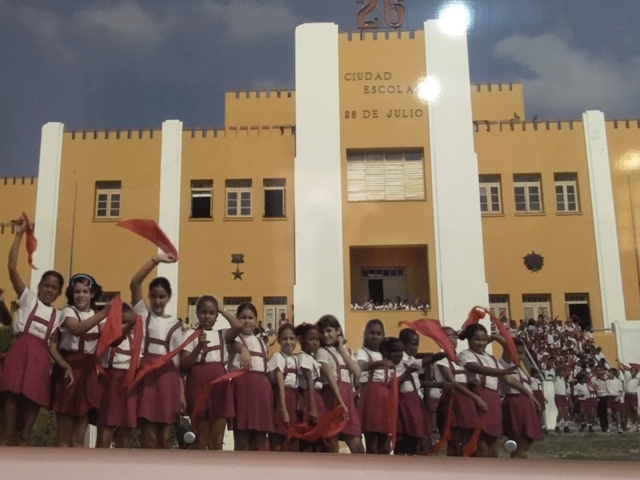 Cuban children at the “Moncada” school or Escola City on July 26.

The U.S. government has been actively opposing the Cuban Revolution since 1958 when President Dwight Eisenhower ordered an arms embargo to prevent the overthrow of the hated President Fulgencio Batista regime by Fidel Castro’s 26th of July Movement and allies.

The U.S. has made many failed efforts to crush revolutionary Cuba — the Bay of Pigs attempted invasion in April 1961, the blockade during the 1962 so-called Missile Crisis, and multiple congressional acts to stop trade or shut down support for Cuba.

On Nov. 7,  Cuba will again bring a resolution to the United Nations to end the continuing U.S. trade embargo/blockade of the country. Every year since 1992, Cuba has introduced this resolution, and every year the pro-Cuba measure is passed nearly unanimously, with typically only the U.S. and Israel voting no.

Despite the U.S. attacks, the Cuban people and Revolution continue to grow. Facing fuel and food shortages, and lack of building materials, Cuba still finds ways to create more housing, and make sure everyone in the country has food, medical care, education and access to transportation. In addition to expanding efforts for alternate sources of energy, Cuba has developed model programs for evacuation, safety and support in the face of hurricanes.

The Venceremos Brigade was created during the Revolution’s tenth year to support Fidel’s call for a 10-million-ton sugar cane harvest. The harvest was planned to counteract the U.S.-imposed blockade after the Missile Crisis.

Over 200 U.S. youth went to Cuba on the first brigade. Since then over 10,000 people have participated in the VB, working primarily in agriculture and construction.

On this year’s VB50 trip, 155 people came to see the progress Cuba has made. Sixty of the brigadistas had been on earlier brigades, including three people from the first VB. The remaining 95 brigadistas were primarily youth of color from around the U.S. The length of time each was on the island ranged from five days to three weeks. This writer was one of the brigade participants.

The Institute for Friendship with the Peoples (ICAP) organized an extensive program of work, study and travel for the brigadistas. The first 10 days were based at the International Camp Julio Antonio Mella. Though this trip emphasized developments in Cuba, brigadistas also did work like cleaning the camp, improving the grounds and picking beans.

At the Artemisa Martyrs Memorial, we heard from a panel of combatants who included Victor Dreke, who fought alongside Che Guevara in the campaign against Batista. The Committee for the Defense of the Revolution in Caimito hosted the brigadistas for a night of community performances that included much dancing and singing.

Throughout these days there were many presentations/discussions covering Cuban life, from the electoral process to race relations to LGBTQ progress and challenges, from women’s roles to trade unions and education. There were opportunities to travel to Che’s memorial in Villa Clara, Las Terrazas biosphere reserve in Artemisa Province, the town of Viñales in Pinar Del Rio province or Varadero beach on the Hicacos Peninsula.

Brigadistas could also choose to visit CNEURO (Center of Neurosciences), founded in 1969 as one of the first groups in the world to use informatics for  analysis of the brain`s electrical activity; LABIOFAM (Laboratorios Biologicos Farmaceuticos), recognized internationally for its work on veterinary vaccines; or CIGB (Center for Genetic Engineering and Biotechnology), a leader in Cuba’s biopharmaceutical industry.

These trips gave brigadistas the opportunity to explore the many advances Cuba has made despite attempts by the U.S. government to undermine the country at every level.

For the official celebration of  the 50th anniversary of the Brigade, ICAP hosted the VB50 in their garden courtyard in Havana. The president of ICAP, Fernando Gonzalez Llort, acknowledged the steadfast solidarity shown by the VB, saying: “Cuba is not, and will never be, alone.” Gonzalez Llort was one of the Cuban Five unjustly imprisoned in the U.S. for nearly 16 years on phony espionage charges.

Learning the history of revolution

After the initial 10 days, some brigadistas departed, with the remaining participants traveling to different destinations in the eastern part of the country. Some went to Camagüey, Bayamo and Cespedes Square to learn the history of the country’s liberation from Spanish colonialism. Others travelled to Los Cayuelos where the Granma yacht landed the first, small group of fighters for the Revolution in 1956; and to Fidel’s mountain combat headquarters at La Plata in the Sierra Maestras. The final group went on to Santiago de Cuba to visit the Moncada Barracks where revolutionaries stormed Batista’s troops on July 26, 1953; they also visited other historic sites, including Fidel’s grave and Guantanamo — which is much more than a small U.S.-occupied territory used as a prison.

Workers World Party has supported the Cuban Revolution since its beginning. This year five WWP members went on Venceremos Brigade 50, including two who were on their second and third brigades.

Bowdish was a WWP member of the VB50 delegation.