Coal miners in Harlan County, Ky., have won a historic victory for more than 1,000 workers fired in July by the bankrupt Blackjewel coal company. In an unusual bankruptcy settlement, the Harlan County miners, as well as others in Kentucky, West Virginia and Virginia, were awarded $5.47 million in wages the company owed them. Usually workers fired by bankrupt companies get little or nothing. 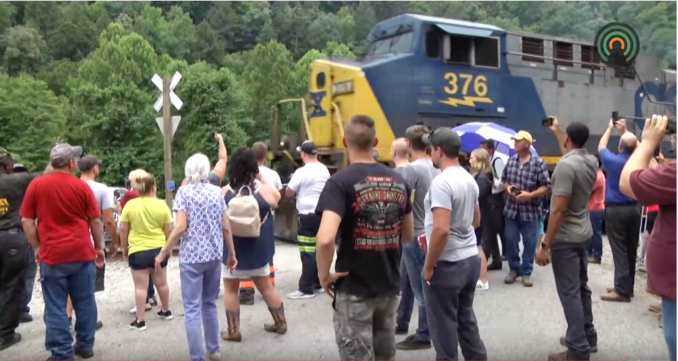 Blackjewel miners and supporters watch a train engine leave without its load of coal. To prevent the entrance or exit of coal trains, they occupied the railroad tracks.

This victory was not at all based on the generosity or good will of a federal judge, but solely on the willingness of the Harlan County miners to fight back against Blackjewel. These miners had no union to back them — in fact, there are no union miners left in Kentucky. What the workers did have was the backing of family, friends and communities surrounding the shutdown mines. And because of social media, their struggle was broadcast around the U.S. and the globe.

A few days after the July 29 firings, Blackjewel, along with CSX railroad, tried to move a $1 million coal train off mine property. Miners heard about this brazen act, and five of them, connecting through social media, went to and stood on the tracks as the train bore down on them. Warned by company security guards that if they didn’t allow the train through, guards would call the cops and have them arrested, the angry miners stayed on the tracks. When the Harlan County Sheriff’s Department came, followed by the Kentucky State Police, the miners agreed to move — not off, just farther down the tracks.

The miners took photos, texted and called fellow miners, family and friends. As supporters by the carload arrived, the miners kept saying they would leave, but only moved farther down the tracks. Finally, a crowd of people stood on the tracks. The cops pulled back.

By nightfall, supporters brought food and water. Then camp chairs appeared and tents were pitched right on the tracks. Campers built fires, barbecue grills were unloaded, and local musicians came and played. Cots and bedrolls were set up, and the first night a more than 60-day occupation began. A few days later, the miners allowed CSX to move its empty locomotives out of the area, leaving 100 overflowing coal gondolas stranded.

Like hundreds and thousands of fed-up non-union workers, such as those at Amazon, Wayfair, Uber and Lyft, and fast food workers striking for a living wage, these coal miners showed that a militant, determined fightback, along with global community support, will win victories — “Til every battle’s won,” as the old labor song, “Which Side Are You On?” goes.

Lewis (she/her) is a retired member of Food and Commercial Workers (UFCW) Local 400.