Lydia Garza and 16 family members drove in a rented van almost seven hours from the Rio Grande Valley to the Texas Capitol here on Saturday, Oct. 19, without even stopping to eat. It was so they could stand up for her innocent son on death row, as well as say “No!” to all executions at the Texas March to Abolish the Death Penalty.

“People have been executed and only later we find they are innocent. The death penalty is only applied to the poor and it is unfair, brutal, discriminating and unjust,” Garza told hundreds of anti-death-penalty activists who listened intently. “Growing up I never really thought about the death penalty and never thought I would be part of its existence.”

Behind Garza her family members held signs with a large photo of their loved one that read: “Help Save Humberto Garza #999495, Convicted under Texas’ Law of Parties.”

The Texas March to Abolish the Death Penalty has been held every year since 2000. Texas executes more people than the next six states combined. The total since 1982 is 565 executions, with another scheduled for Oct. 30 and eight more after that, including one on the Rev. Dr. Martin Luther King Jr.’s birthday in January.

This year, stories of the families highlighted the event. Their few words, spoken with such emotion, such intensity and such clarity held the crowd virtually speechless. “We, the families standing up here today, are truly victims of this system ourselves. It is an injustice what has been done to us. It’s unbelievable what happens to all the families as well as our loved

ones on death row,” said Delia Perez Meyer. Her brother, Louis Castro Perez, is now being represented by The Innocence Project.

Terri Been is the sister of Jeff Wood, a man sent to death row under Texas’ Law of Parties for a murder that happened without him even being present. “Think about this,” she said. “Carved on the U.S. Supreme Court building are the words ‘Equal Justice Under Law.’ To sentence my brother to death is not equal justice. He has been living in a cell smaller than my bathroom for over 20 years — not equal justice. I have walked these halls at the Capitol for many years,” with no one listening to her words. “I have spilled my soul to them. This is not equal justice. Let’s use our power to effect change!”

Lee Greenwood-Rollins said, “My son was Joseph Nichols, convicted under the Law of Parties. He was not the shooter and Harris County acknowledged this, but he was executed anyway. His death certificate read ‘state-sponsored homicide.’ Executions reverberate throughout your family and it leaves a lot of scars, some you don’t realize until later years. Joseph had four siblings and it affected each one differently. I only ask that you remember Joseph. Remember cases like Frances Newton’s and Shaka Sankofa’s. As I promised my son, we just must keep fighting!” Greenwood-Rollins had come with her granddaughter, Kristian Nichols-Muchiri, on a bus from Houston.

Vickie Curry spoke in front of the Capitol with her 13-year-old daughter Al’toria by her side. “George Curry is my husband. He’s innocent, but we didn’t have money for a lawyer. He refused to plead guilty in exchange for a sentence of 60 years without parole, saying he wasn’t going to confess to something he didn’t do. He was tried, convicted and now sits on death row.” 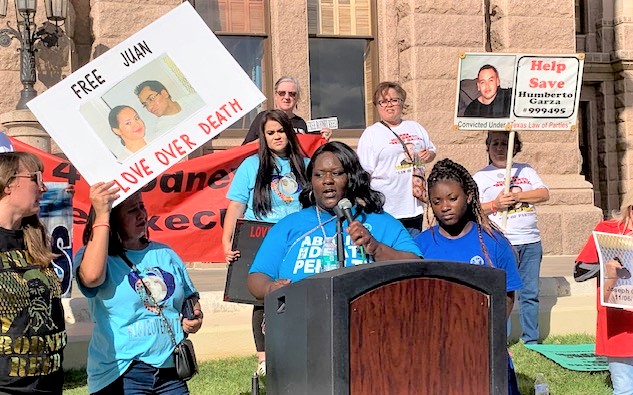 Vickie Currie and her daughter, Al’toria, in front of Capitol.

Dozens of supporters of death row prisoner Rodney Reed were present. Reed is represented by the Innocence Project in New York City. His execution date is set for Nov. 20, just four weeks after the rally.

The Reed family is spending night and day traveling around the country, speaking, protesting, marching, being interviewed and holding press conferences. Reed’s case was recently featured for two days on the “Dr. Phil” show. Reality star Kim Kardashian just came out in support of stopping Reed’s execution. Sister Helen Prejean, noted author of the best-selling book “Dead Man Walking,” from which a movie was made, is supporting Reed. She regularly tweets and speaks about the Texas case.

Reed’s mother, Sandra, and his brother, Rodrick, spent a good part of the day speaking with supporters and with the news media. Because of the national attention his case of innocence is getting, the local media are paying close attention to developments.

Sandra Reed spoke at the annual marches beginning in 2002. She exclaimed to the crowd: “Thank you all for your support. Rodney’s case is a prime example of why we should not have a death penalty at all. Corrupt police, corrupt Department of Public Safety, corrupt lawyers, corrupt judges.”

Four honored guests flew into Austin for the weekend and told their horror stories.

Albert Burrell spent 13 years in the infamous Angola Prison, a former slave plantation, before being found innocent. He came within 17 days of execution in 1996 before his attorneys won a stay.

Ron Keine was on death row in New Mexico for three years until it was proven that a cop actually committed the murder!

Sabrina Butler-Smith was an African-American teenager in Misissippi when convicted of the murder of her nine-month-old son, Walter. She was later exonerated of all wrongdoing. She is one of only two women in the United States exonerated from death row.

Gary Drinkard spent almost six years on Alabama’s death row before he was finally exonerated in 2001.

Kids Against the Death Penalty

Kids Against the Death Penalty was likely the most energetic group at the rally, giving out free water, selling T-shirts and giving away cute and creative buttons for Abolition and for Jeff Wood, Louis Castro Perez and others on death row. Nick Been and Tanner Tucker, who founded KADP in 2008, tag-teamed their speech. “I have had the opportunity to speak at this march for the last ten years, quite literally for over half of my life. One of my favorite quotes is from Desmond Tutu: ‘If you are neutral in situations of injustice, then you have chosen the side of the oppressor.’”

Nicole Combs, speaking for the H.I.S. Ministry, introduced Lewis Bowden, who read a message from Pam Perillo. Perillo spent 20 years on death row before her sentence was commuted in 2000. She did 18 more years and was finally released this year.

Lillian Mauldin spoke for Amnesty International, University of Texas Chapter. Travis County (Austin) District Attorney candidate Jose Garza told the crowd that if elected he would not use the death penalty as a sentence for any crime.

The final speaker was Yancy Balderas, spouse of Juan Balderas, who strongly condemned the use of the death penalty. “Juan spent almost nine years in the county jail waiting for a trial. Not a speedy trial! He has now been on death row for five years and we are finally learning how to prove his innocence.”

Balderas spoke for the Texas Death Penalty Abolition Movement in Houston. Juan Balderas’ family and supporters were the largest contingent at the march.

The day’s activities were held on a bright sunny day, the weather finally under 90 degrees, with all participants energized and ready to take on the state until the death penalty and the execution chamber are finally shut down.