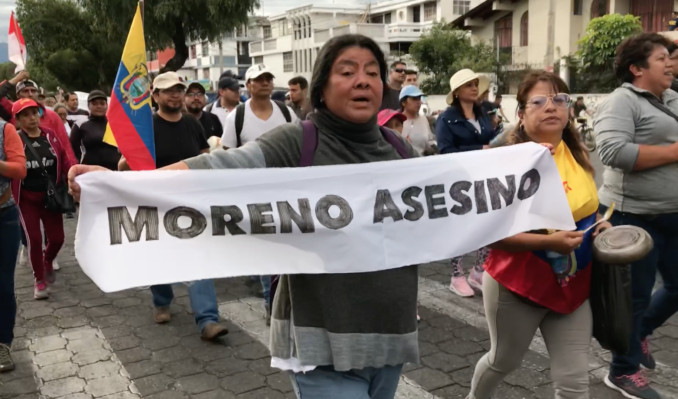 Part of an unprecedented demonstration of 6,000 people in the small city of Ibarra, Ecuador, on Oct. 13.

By Monday, Oct. 14, at noon, however, Moreno showed once again why people in Ecuador consider him a liar and a traitor. Government authorities raided progressive political leaders’ homes, focusing on elected leaders of the Citizen’s Revolution — the party that led Ecuador from 2007-17 — and arrested them.

Moreno had ordered massive state violence against the Indigenous people and their organizations, but was forced to call for negotiations on Sunday, Oct. 13. As people around the country learned that Moreno had pulled back from increasing fuel prices, they exploded in jubilation and a new sense of their own power, even as they felt anxious about an imminent double cross.

The Citizens’ Revolution of former President Rafael Correa considers Moreno a traitor because he was elected to carry out their progressive platform, but instead reversed many of its gains for the people, especially for the poor. Moreno forgave $4.5 billion in tax debt of  the rich, allowing billions to flow to financial tax havens. Consequently, Moreno surrendered to the International Monetary Fund and neoliberal policies, including privatization of public companies.

The IMF demanded Ecuador end fuel subsidies, fire public workers or reduce their salaries, and impose other conditions of austerity that primarily hurt the poor – measures described as the “paquetazo” [economic package] – as terms for granting a $10 billion loan. That Moreno was forced to make a public concession is itself a sign of the strength of the mass struggle against a treacherous president and the imperialist IMF.

Negotiators from the Confederation of Indigenous Nationalities of Ecuador (CONAIE) had opened talks with Moreno on Sunday, Oct. 13. According to yesterday’s agreement, talks between the government and a commission of Indigenous representatives will determine the very important details of the new decree replacing #883. At a news conference today, CONAIE leaders had to defend themselves against charges they had “betrayed” the movement by making a deal with Moreno.

Within ten days of the original decree, Ecuadorians had risen up in every city, town and community to demand the end of the Moreno government. As of Oct. 13, the country’s north-south Pan American highway was still blockaded by well-organized Indigenous people in many places. In as many as ten provinces, such as Pastaza and Cañar, people were occupying government buildings.

Before the agreement, the National Federation of the Chambers of Industry was reported to be calling for emergency action by the state armed forces to impose what it calls “law and order”: open the highways and prosecute the insurgent people, who it calls “the perpetrators, accomplices and collaborators, and the material and intellectual authors of the crimes that have been committed.”

According to CONAIE, since Oct. 2, some 10 people have been killed in confrontations with the army and police, 1,000 were wounded or injured, 2,000 arrested and as many as 100 have been “disappeared.”

It is obvious from their words that the members of Ecuador’s oligarchy — not to mention its big bosses in the United States — prefer brutal repression to making any concessions to the workers and peasants of the country.

The government refused to recognize CONAIE’s demands to remove the two hated ministers who control the forces of repression and to end the state of emergency. The main demands of the thousands of Indigenous-led demonstrators have been: restore the fuel subsidy eliminated by Decree #883; end the state of emergency; down with the paquetazo; Lenín Moreno must go; end military and police aggression against Indigenous communities.

Observations through the last week in different parts of the country, mostly by first-hand or phone reports, show how the uprising progressed after the government tried to suppress it by force.

Álvaro Castillo is the appointed governor of Imbabura province. Neither Castillo nor the mayor of Ibarra welcomed 4,000 Indigenous comuneros [members of groups of Indigenous people acting collectively] of all ages who had marched for hours on Oct. 7 to deliver a manifesto to the governor.

On the other hand, Councilperson Betty Romero and around 50 members of the local Revolucion Ciudadana (Citizens’ Revolution) waited to greet the marchers with food and water as they entered the city.

Hundreds and hundreds of these same Indigenous marchers could be seen on Oct. 8 taking food and resting by the Ibarra train station. Scores of mounted police and cops with shields, wearing full body armor and gas masks, stood ominously on the perimeter, ready for action.

Well-organized and highly disciplined, the Indigenous marchers calmly formed a people’s assembly in front of the cops. They repeatedly chanted, “Take off your masks,” and finally after about five anxious minutes the cops complied with the demand – a foretaste of Moreno’s retreat five days later.

On Oct, 13, the people held an even bigger march of 6,000 people, completely unprecedented for Ibarra, before the agreement was announced. Bus and taxi traffic was nonexistent in Ibarra for the entire 11 days of action.

Cuartel Militar Yaguachi is a military base located on the outskirts of Esperanza, seven miles south of Ibarra on the road to Cayambe, a city in an agricultural area 27 miles from Ibarra. The rural population around Cayambe is primarily Indigenous.

Armed forces from Yaguachi used extreme violence to repress the Indigenous Caranqui people who went into the streets to protect the Esperanza community.

Councilwoman Betty Romero of Ibarra called on all citizens to collect water and food to support besieged Esperanza, where some 1,500 people were reported to be in the streets yesterday. People have answered her call and delivered food aid to the people there.

Quito is the national capital and second-most-populous city of Ecuador, located high in the Andes Mountains. Already on Oct. 7, thousands of Indigenous people approaching Quito from the south encountered two armored vehicles blocking the highway at the Santa Rosa curve in Tambillo. A tweeted video shows the people pushing a burning tank onto the grass and down an embankment. (tinyurl.com/y5dor49j)

Fifty thousand peaceful protesters, led by CONAIE, were in the streets of Quito’s historic center along with workers, peasants and people from all sectors of society. On the morning of Oct. 9, hundreds of Indigenous people made history by holding a People’s Assembly in the National Assembly building before the forces of repression ended the occupation with tear gas. The Eugenio Espejo Hospital across the street from the National Assembly was similarly gassed, provoking outrage among the people.

Tens of thousands marched and are marching for the National Strike/Paro Nacional in Guayaquil, Ecuador’s most populous city located on the Pacific Coast. Mayor Cynthia Viteri and former Mayor Jaime Nebot (Partido Social Cristiano) of Guayaquil organized what to all appearances was a fascistic, right-wing march on Oct. 9 “in defense of Guayaquil.” This was after the two rightist leaders urged followers to stop “outsiders” — that is, Indigenous people — from entering the city, claiming they were coming to “trash” it.

An Indigenous man speaking with great emotion in both Quechua and Spanish in the Guayaquil region was recorded, saying: “There are more than 500 people from Chimborazo province in Guayaquil. … You Social Christians say, ‘Indios go back to your mountains, you are not going to take a step in Guayaquil.’ Carajo! You live here thanks to us! If nothing passes from Chimborazo to Guayaquil you will all die of hunger.”

While an agreement has allegedly been reached on pulling back from the most noxious element of the paquetazo with the IMF, the new wave of repression shows that little has been resolved in Ecuador. The struggle continues.