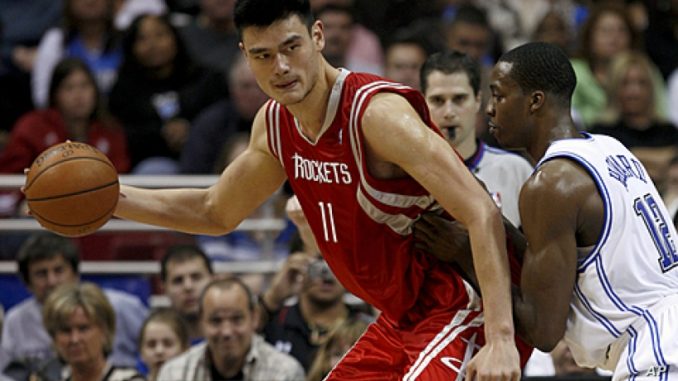 Daryl Morey, the general manager of the Rockets, tweeted out seven words during the first weekend in October that set off a firestorm of controversy and debate from China to the U.S.  Those seven words were: “Fight for freedom, stand with Hong Kong.”

Those words were immediately deleted almost as fast as they were posted. Morey issued an apology after the Rockets’ owners publicly stated that they do not take political positions.

No matter, however, because the damage had already been done.  The Chinese government stated that they were insulted and outraged over Morey’s comments.  One only has to examine the class nature of the Hong Kong protests to understand why. These protests have been pro-imperialist and pro-colonial, reflected by U.S. and Union Jack flags, which are totally reactionary and insulting toward China’s sovereignty and self-determination. There have even been visible signs asking for Trump to intervene by making Hong Kong a U.S. territory!

Morey’s tweet, suggesting that Hong Kong, a strategic center of global finance capital, should break away from mainland China, is blatant interference into the country’s internal affairs. Yet the U.S would be up in arms if, for example, China suggested the Virgin Islands break free of U.S. control.

China is a significant market for the NBA due to social media and the internet. In fact, according to David Carter, executive director of the USC Sports Business Institute, 10 percent of the NBA’s total revenue comes from China. That percentage is expected to double by 2030.

NBA Commissioner Adam Silver apologized to the Chinese government for the tweet at a recent press conference in Tokyo. However, in the same breath, Silver defended Morey’s “right to free speech” and stated further that the NBA “will not pursue profits over principles.”

In a rebuttal to Silver, the Chinese state’s CCTV Sports said, “We believe any remarks that challenge national sovereignty and social stability do not belong to the category of free speech.” (CNN, Oct. 8)

Contrary to his statement, Silver wants to downplay the economic impact of this impasse with China, banking that a proposed meeting with Yao Ming will help resolve this huge political rift which would have major implications for the NBA’s bottom line.

NBA players, especially high-profile ones who have multimillion-dollar merchandise contracts with Chinese businesses, have now been sanctioned by the NBA hierarchy not to answer any media questions associated with Morey’s tweet, even though this won’t stop the media from putting pressure on these players, the majority of whom are Black.

LeBron James from the Lakers stated that Morey was “misinformed” and “wasn’t educated” on the situation in China.  He went on to say, “I think when we talk about the political side, it was a very delicate situation, a very sensitive situation.  [I] do not believe there was any consideration for the consequences and ramifications of the tweet. I’m not discussing the substance. Others can talk about that.” (espn.com, Oct. 14)

CCTV canceled a telecast of a preseason game between the Brooklyn Nets and the Los Angeles Lakers in Shanghai and Shengzhen. Tencent Sports (TCEHY), the NBA’s exclusive digital partner in China, plans to cease livestreaming Rockets’ games indefinitely and not report any news about the team. The Chinese government also canceled activities hosted by NBA Cares — a program that connects players to communities where teams are based — along with media events.

Chinese smartphone maker Vivo and other businesses announced plans to suspend contracts with the NBA.

Joseph Tsai, the Chinese principal owner of the Nets, wrote Oct. 6 on Facebook, “The NBA is a fan-first league. When hundreds of millions of fans are furious over an issue, the league, and anyone associated with the NBA, will have to pay attention. As a Governor of one of the 30 NBA teams, and a Chinese having spent a good part of my professional life in China, I need to speak up.

“The problem is, there are certain topics that are third-rail issues in certain countries, societies and communities. Supporting a separatist movement in a Chinese territory is one of those third-rail issues, not only for the Chinese government, but also for all citizens in China.

“The one thing that is terribly misunderstood, and often ignored by the Western press and those critical of China is that 1.4 billion Chinese citizens stand united when it comes to the territorial integrity of China and the country’s sovereignty over her homeland. This issue is non-negotiable.”

Tsai went on to explain historically how China was occupied by foreign powers such as Japan, Russia, Britain, France, United States, Germany, Italy and Austria-Hungary throughout the 20th century until the Chinese Revolution liberated one-fourth of humanity in 1949.

The right of free speech is a phony argument that not only deepens anti-communist attacks on China but hypocritically ignores the human rights’ violations that occur every minute of every day inside the U.S.

Sports commentators and other bourgeois pundits should not have the right to attack China when, historically and currently, the right to free speech has been granted to white supremacists and sexual abusers like Trump under the guise of protecting bourgeois democratic ideas.