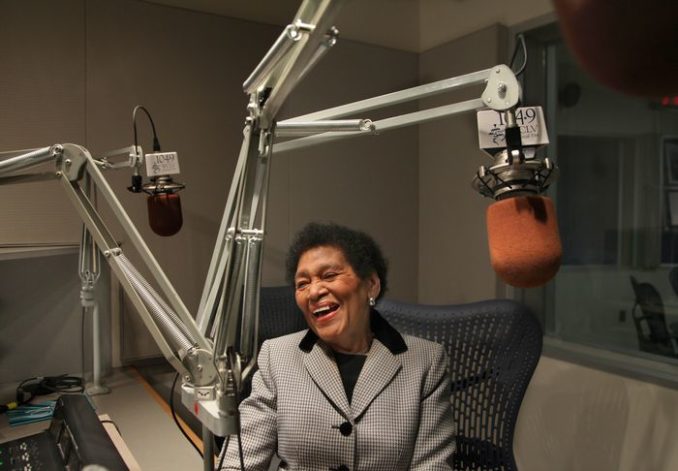 Mims was highly regarded, in the city and beyond, for her advocacy for and preservation of African-American cultural heritage, especially the Negro spiritual tradition. For 43 years she hosted a one-hour show, The Black Arts, on classical music station WCLV — bringing Black culture to a wider audience.

Along with her brothers, Clifton and Bill, and sister, Consuela Lee, Mims performed for many years with their ensemble, The Descendants of Mike and Phoebe, and recorded the album, “A Spirit Speaks.” The group’s name honored two enslaved ancestors whom the siblings learned about as children from their grandfather, William James Edwards, founder and first principal of Snow Hill Institute in Snow Hill, Ala.  Edwards was a protege of Booker T. Washington, who founded Tuskegee Institute in Tuskegee, Ala.

A song on the 1973 album, now considered a jazz classic, paid tribute to the Attica rebellion.  Mims also recorded a 1981 solo album, “Spirituals.”

Howard Mims and A. Grace Lee met while students at Hampton Institute, now Hampton University. After graduating in 1952, they married. Howard Mims founded the Speech and Hearing Department at Cleveland State University and for many years headed the African-American Studies Department and ran its Cultural Center. After his death in 2002, the center was renamed in his honor.

The couple formed the Cleveland Chapter of the Hampton University Alumni Association, which has awarded over 100 college scholarships to area youth. A. Grace Lee Mims gave music lessons and assisted her students in entering college and pursuing musical careers. Several of her students attended the memorial, with one performing on the church organ and piano.

Mims worked for decades as a librarian — in Detroit at Cleveland Public Library and for ten years in Cleveland Public Schools at Glenville High School. The Glenville neighborhood is perhaps best-known for the 1968 rebellion against racist police brutality. While at Glenville High, she coordinated the Black Arts Festival, assembled Ohio’s largest collection of books on African-American history and culture, and helped launch the first Afrocentric lecture course in CPS. Black celebrities, including Muhammad Ali, participated in the Black Arts Festival.

Mims later earned a master’s degree from Case Western Reserve University and was awarded an honorary doctorate in music from Cleveland State University in recognition of her many contributions to the arts and arts education.

At 89 Mims was still producing her radio show, taping two shows every other week. It was on Oct. 3, after she did not show up at the WCLV studio as expected, that she was found dead in her home.

Monica Moorehead, a WW managing editor and Mims’ niece, told WW, “My aunt was sympathetic to not only the plight of Black people but to people of color around the world.  She loved to talk politics around the dinner table during our visits to Snow Hill. I will always cherish our time together, from when she took me to a jazz concert when I was 16 years old until she came to a Cleveland campaign rally in 2016 — at the age of 86 — to hear me speak as the presidential candidate for Workers World Party.  She was a very special aunt and woman.”