Angry Haitians flooded the streets of Port-au-Prince Oct. 4, coming from many of its neighborhoods, such as Nazon, Solino, Bel-Air, Fort National and Delmas, to converge at the U.N. logistics base in Clercine near the airport. According to reports in the Haitian press, the action included people in wheelchairs.

What angered the crowd in particular was the support that the Core Group — ambassadors of the U.S., France, Germany, Canada, Spain, the EU and some big international organizations — was giving to President Jovenel Moïse and his gang, known as the Party of Bald Headed Haitians (PTKH). The Core Group wants at least a truce or a dialogue between the PTKH and the militants in the streets — some period of calm. 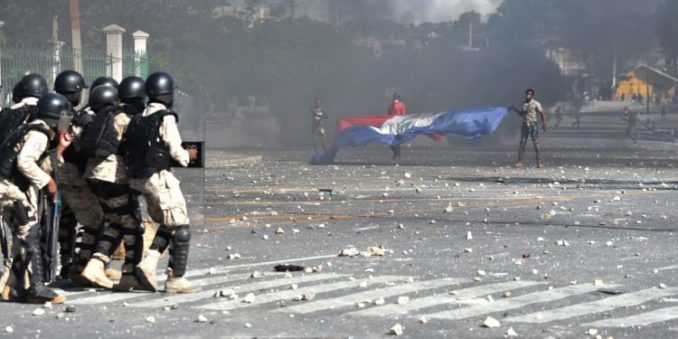 Protesters in Haiti demanding ouster of U.S.-backed government hold their flag in defiance of armed repression

The militants are hostile to the Core Group’s call for a truce. One of them told AlterPresse, an online Haitian news source, “Today we are waging a battle for the liberation and well-being of the Haitian people.” Another demonstrator explained the U.S., France and Canada are acting like “gangsters by condoning the corruption and violence that this government carries out.” (Oct. 4)

In the past 10 years, the government of Haiti has brought in about $4 billion by selling Venezuelan oil, which it purchased at a substantial discount through a program called PetroCaribe. This money was supposed to be spent for the economic development of Haiti, but it wasn’t. The question “Kot Kòb Petwo Karibe a?” (“Where is the Petrocaribe money?”) is one of the major issues the protests raise.

What makes the issue of “corruption” in Haiti so explosively compelling is that its people are so poor. Forty percent of Haitians depend on agriculture for their livelihood, but farming is vulnerable to natural disasters like droughts, floods and hurricanes. Three-quarters of the population lives on $2 a day or less. Some 2.6 million Haitians, according to a U.N. estimate, are “food insecure” — they regularly go hungry. Recent food shortages in Haiti have caused acute malnutrition among more than 5,000 children under the age of five.

Currently there is a scarcity of fuel, as Venezuela can no longer export oil to Haiti at low prices. Besides, the U.S. boycott imposed on Venezuela makes it impossible for Haiti to pay Venezuela. Since the Haitian government can no longer pay its bills, food distribution by the U.N. and other relief groups is more difficult. It has also significantly increased the inflation raging in Haiti.

The huge turnout on Oct. 4, which shut down much of Port-au-Prince, was the third Friday when massive, countrywide demonstrations “locked” down the country. Most businesses and factories in Port-au-Prince closed. Major demonstrations took place in most of the large Haitian cities: Cap-Haïtien in the north, Gonaïves and Saint-Marc on the central Haitian coast, Mirebalais in the central plateau, Miragoane, Jacmel and Jeremie in southern Haiti.

In Cap-Haïtien, where demonstrations have been massive, the cops fired directly at people, and a 65-year-old woman was killed. According to some civil rights groups in Haiti, at least 17 people have been killed and 187 injured by police actions, since protests intensified in the middle of September. (Miami Herald, Oct. 3)

Before the protests in Haiti heated up, U.S. House Speaker Nancy Pelosi was invited to speak at the Father Gerard Jean-Juste Community Center in North Miami-Dade on the many issues that affect the Haitian community in south Florida.

But the Miami Herald also reported that the anger of the Haitians at the meeting gave her a different message to take back to the Democratic Party in Washington: The U.S. must stop meddling in Haiti’s internal affairs and Moïse must go.

Gepsie Metellus, the executive director of Sant La Haitian Neighborhood Center, put it this way: The U.S. ambassador in Haiti, Michele Sison, was acting like a commander in chief in Haiti and a “cheerleader” for Moïse. She was ignoring the massive protests.