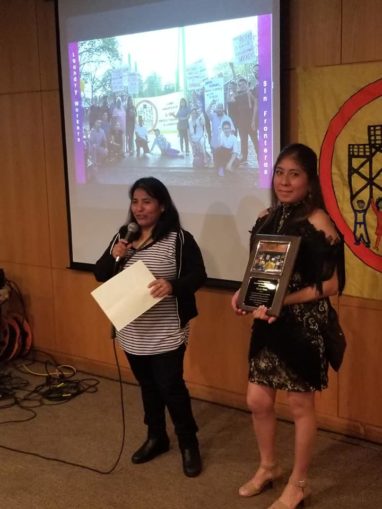 The Laundry Workers Center held a fundraising gala at St. Peter’s Church in Manhattan on Oct. 4.  The center’s political philosophy “is rooted in organizing workers and building their leadership skills and political power through a variety of worker-led tools and tactics, including taking direct action at the workplace, serving as their own voice to media outlets, speaking out as members of the community, and acting as their own advocates at the negotiation table.” (laundryworkerscenter.org/our-mission)

The theme of the gala was “Sin Fronteras! Without Borders — Celebrating the Victories of Women Laundry Workers.” The event raised awareness and funds for the important ongoing work of the LWC in organizing low-wage, predominantly im/migrant, workers.

These workers are forced to endure higher incidence of wage theft, intolerable working conditions and sexual abuse. The LWC has been in the forefront of organizing and defending the workers, many of whom — especially the women — come without a voice but with solidarity on the job and in the streets and soon become organizers themselves.

One such person is Ricarda, who was born in Guerrero, Mexico, and migrated to the U.S. at the age of 26.  Ricarda has worked for 15 years at the Sunshine Shirt Laundry Center in Bay Ridge, Brooklyn. She launched her first campaign as a LWC organizer in February.  During the gala, a video was shown of Ricarda presenting grievances to her boss on the job, with other LWC members there to support her. Ricarda received a plaque of recognition from the LWC. Jeanne Mirer, a labor lawyer, received an Immigrant Rights Defender award from the LWC.

Rosanna Rodriguez, LWC co-executive director, reviewed the important work of the LWC over the past year.  Advances included winning $220,000 in back pay for workers; initiating an anti-wage theft bill; helping to raise the minimum wage in New Jersey; and working with FIRE (Fight for Im/migrants and Refugees Everywhere) to get Greyhound to stop collaborating with ICE as it targets immigrants on its buses for arrest and deportation.

Cultural performances at the gala were provided by the Villalobos Brothers and Mimi Berkova.

For more information on the LWC and how you can support the organization, go to laundryworkerscenter.org and facebook.com/lwc.org.