As the biggest (numerically) U.S. strike in over a decade enters its fourth week, General Motors workers are showing no signs of giving in. While they would like to see some resolution and return to work, they don’t want to go back in with a bad contract. The 49,000 United Auto Workers’ members want to see “temporary” and lower-paid “in progression” workers brought up to top pay and given equal  benefits. “Everyone Tier One!” has become a popular picket sign. 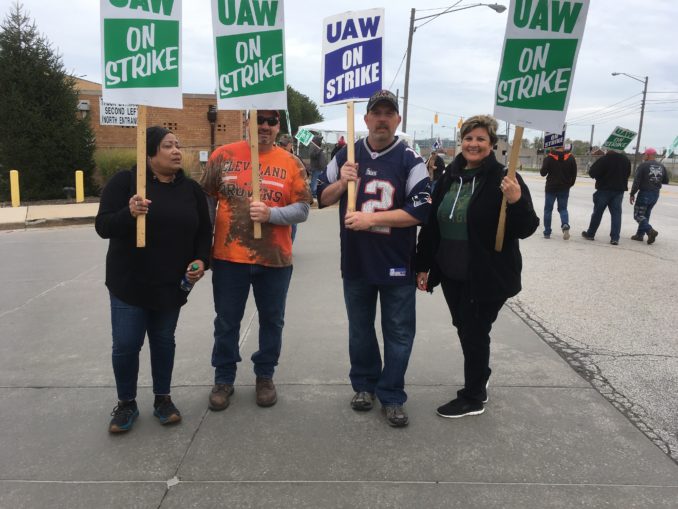 Striking members of UAW Local 1005 outside the GM plant in Parma, Ohio. October 7, Day 22 of the strike.

There are also demands to cancel plant closings, raise retiree pensions and give every worker a decent pay increase. Workers know that the company, which made $35 billion in clear profit over the past four years, can well afford to address all their concerns.

The capitalist press has repeated on a near-daily basis GM’s complaint that its U.S labor costs hover around $62 an hour — higher than Ford, Fiat Chrysler Automobiles (FCA) or the non-union plants of Asian and European auto companies. This misleads the public into believing that autoworkers make that figure in hourly wages. But the amount includes many other labor costs, such as pension contributions, vacation and holiday pay, and health insurance. In 2007, the year of the last GM strike, pay was closer to $80 an hour.

What isn’t often said is that labor costs are less than 5 percent of a vehicle’s price tag, and that overall labor costs per vehicle fall with each new generation of automation technology, which is designed to raise productivity and get more work for the same or less pay. Moreover, GM, Ford and FCA have all cut costs via the outsourcing and subcontracting of work previously done by the Detroit Three UAW workers.

GM employs the biggest number of autoworkers in Mexico; it has more workers in China than in the U.S. Pay for these workers doesn’t begin to approach $62 an hour. South Korean GM workers are striking at the same time as their U.S. counterparts — also for higher wages and to make  temporary workers permanent.

Strikers were on a bit of an emotional roller coaster the weekend of October 5-6. On Saturday, UAW Vice President Terry Dittes gave workers an update, stating that “good progress” had been made, including a path to permanent status for temporary workers. The next day he informed strikers that negotiations had “taken a turn for the worse.”

With all the publicity around corruption in the UAW International leadership, and the paucity of specific information from their negotiators, rank-and-file workers aren’t sure how much to believe about the deal being negotiated. In the past, the International has pitched concessionary contracts that contained the current language allowing the deplorable treatment of temporary workers.

What strikers understand clearly is the sharp class conflict between GM’s determination to shrink workers’ pay and UAW members’ equally fierce determination to win wage equity, job security and a bigger share of the value they produce. Their strong will is a factor in the negotiations, which are continuing.

Solidarity with the strike continues to build. The Michigan state chapter of the American Federation of Teachers has called on its members to join the picket lines. The NFL Players Association has just pledged its support. UAW Local 961, representing the FCA Marysville Axle Plant, delivered 30,000 pounds of food to Local 22 at the GM Detroit-Hamtramck assembly plant. Ford workers in Turkey are the latest to send an international solidarity message.

The list goes on of unions here and abroad that see the GM workers’ fight as their fight.

Grevatt is a retired UAW FCA worker and serves on the Executive Board of UAW Local 869.