September 29 marked two weeks on the picket line for nearly 50,000 General Motors workers. This was the second “Solidarity Sunday,” with supporters joining picket lines around the country. Rain did not stop non-GM UAW members and union staff from joining the lines outside plants in metro Detroit.

Outside the Lordstown, Ohio, assembly plant, idled since March, there was no sign that workers would go back to work without a decent contract. They want their plant — and three other plants GM has closed or plans to close — kept open with a product that will assure job security into the future. They want to protect health care benefits without the steep increases in worker costs GM is demanding. 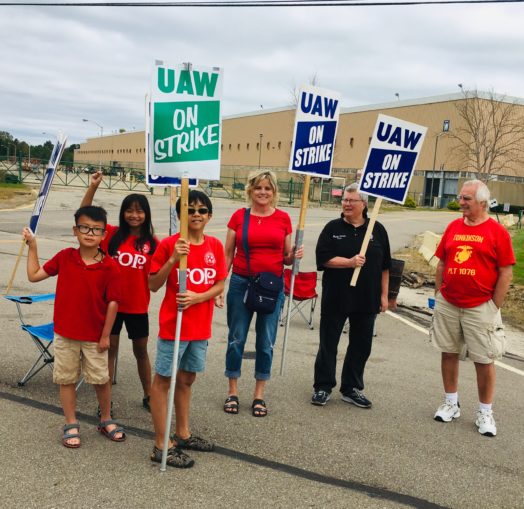 Strikers want raises that keep up with inflation. Perhaps most importantly, they want to see wage and benefit parity, which means eliminating tiers and giving “temporary” workers permanent status. But GM wants to up the percentage of contingent workers, who are paid less, have bare-bones benefits, work flexible schedules (from the company’s standpoint), cannot accrue seniority and can be fired with little recourse.

Making even less money are janitors and others who work in the plants but are employed by Aramark, Caravan Knight and other third parties. Aramark workers at five GM plants are also on strike.

Signs reading “Everyone tier one — Solidarity forever” and “Temps lives matter” are now carried alongside the generic “UAW on strike” signs the union provided. Hip-hop videos from the picket lines, with lyrics addressing the mistreatment of temps, are going viral.

The rank and file is fed up, and everyone is striking fr the betterment of the lowest paid.

The federal government, along with GM bosses, may have hoped to distract strikers with the corruption scandal involving UAW leaders, who allowed concessions in the past. But plant workers know their primary battle is with the company. Not trusting Washington’s motives, especially under the anti-labor Trump administration, which recently appointed right-winger Eugene Scalia as Secretary of Labor, their attitude toward  the bribe-taking and misappropriation of funds is “Let us clean up our own house.”

Strikers were not intimidated when GM abruptly canceled their health insurance when the walkout was barely underway. This created serious hardships during the process of switching to union-paid insurance. The suspension of benefits blew up into a public relations disaster for GM and CEO Mary Barra, who were seen as heartless.

On Sept.  25 GM informed the union that company-paid coverage would resume. Whether this would only be until the end of September or indefinitely while negotiations continue is still unclear.

This about-face led to some speculation that a tentative agreement might be imminent. But until then solidarity on the lines remains strong.

On Sept. 9, over 10,000 South Korean autoworkers waged a three-day strike at all of the country’s GM plants, following that with partial strikes at selected plants. The strike is continuing, with primary demands for higher wages and permanent status for temporary workers.

The Korean Metal Workers Union, which represents GM workers, sent a letter of support to the UAW. In Mexico, five GM workers were fired after refusing to increase productivity. They did so in solidarity with strikers here, realizing that raising production in their plant would be used to offset U.S. production losses due to the strike.

GM workers and their unions in Brazil, Canada and elsewhere have also sent solidarity messages. What’s needed is for the UAW to reciprocate and support struggling autoworkers worldwide. That will really give GM bosses and the shareholders on Wall Street something to worry about.