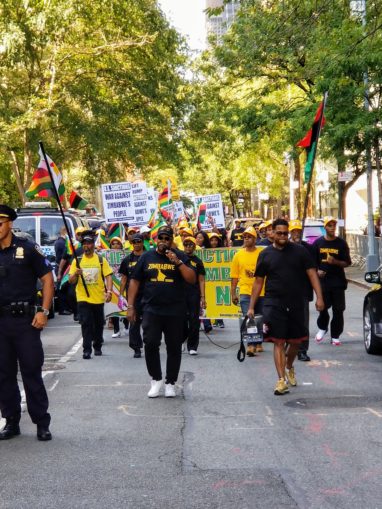 The Brooklyn-based December 12th Movement and Friends of Zimbabwe organized a march from 53rd Street and Lexington Avenue to the United Nations on Sept. 21 and demanded an end to the deadly economic sanctions imposed by the United States on Zimbabwe in southern Africa. The organizers repeatedly chanted “Sanctions kill.”

The sanctions, which are an act of war, have created tremendous hardships for the Zimbabwean people since the early 2000s. Hardships increased due to severe bouts of drought due to climate change.

Sanctions were implemented in an attempt to push out of office the late President Robert Mugabe, who ushered in a radical land redistribution program to return land back to war veterans who fought a heroic guerrilla struggle against the racist, colonialist regime of Ian Smith. This struggle resulted in Britain having to compensate white farmers, who illegally occupied and profited off the land for many decades to enrich their coffers.

Once the march reached Dag Hammarskjold Plaza at the U.N., the protesters joined forces with a rally calling for the independence of Puerto Rico, a colony super-exploited by the U.S.