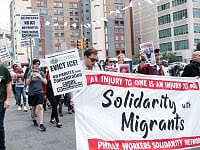 Around 50 people gathered at the Philadelphia Immigration and Customs Enforcement office on Sept. 14 to demand that Pomegranate Real Estate evict ICE from its office building. This was the first event of the newly formed Philly Workers’ Solidarity Network, which launched a campaign to evict ICE and protest all corporate collaborators with ICE and all concentration camps.

Pomegranate CEO Michael Willner holds leadership positions in organizations for young people across the Philadelphia region, yet he continues to profit from leasing 33,000 square feet of prime office space to one of the most aggressive, child-abusing ICE offices in the country. Demonstrators raised this connection by holding up signs of children and other migrants killed while in ICE concentration camps and reading off the names of many of the victims of ICE.

While rallying at the ICE office, hundreds of people signed petitions with demands to evict ICE and for Pomegranate to pay back their profits to migrant organizations as reparations for their collaboration with ICE. Demonstrators marched through Chinatown, receiving a welcoming cheer by City Councilor Helen Gym and attendees of the Asian-Americans United’s Mid-Autumn festival in Chinatown.

The march ended at the Greyhound Terminal at 1001 Filbert Street where demonstrators marched inside the facility to demand that Greyhound kick ICE off their buses. Participants in the action passed out hundreds of “Know your rights” flyers to Greyhound passengers and rallied outside the building, making the connections among Greyhound, ICE and companies like Aramark, which profit from mass incarceration of migrants.

The Philly Workers’ Solidarity Committee will continue to build its campaign to evict ICE, get ICE off Greyhound buses and connect the struggle against ICE concentration camps to the struggle to abolish prisons and mass incarceration of working-class people and people of color in the USA. People can sign the petition to evict ICE at bit.ly/PhillyEvictICE.