When Hurricane Dorian stalled over Grand Bahamas and the Abacos Islands in the Bahamas for nearly 40 hours on Sept. 1-2, with sustained wind speeds of 185 miles an hour, it left piles of houses and buildings reduced to kindling and rubble, along with an untold number of deaths.

Dorian left no grocery stores, no gas stations, no electricity, no water, no food, no sanitation, no telephone or internet service for thousands of people. After a week, only very limited services have been restored. Rescue workers had not reached  some of the more remote communities on the Abacos Islands as of Sunday, Sept. 8.

The extreme character of Dorian indicates that the crisis of climate change has made hurricanes hotter, wetter and slower — wreaking even more destruction. Small countries like the Bahamas, even if they are able to get their carbon footprint to negative, have little influence over the world’s climate.

Small countries are unable to change the conditions that the capitalist system has created worldwide. They certainly have the right to demand refuge from the storm’s destruction and aid from the big capitalist powers that are devastating the global environment. This is an issue for the progressive movement here in the U.S. to vigorously take up. 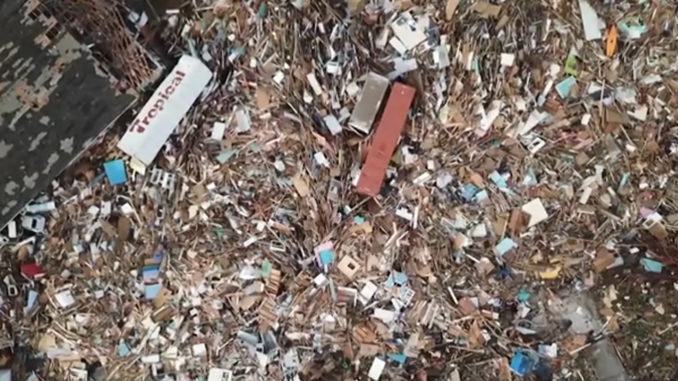 This aerial image shows the flattened homes and rubble of a region in Abaco, Bahamas, that was home to many Haitian migrants.

While all the communities in Marsh Harbour, a large town in the Abacos Islands, suffered substantial damage, the Marsh Harbour community called “The Mudd,” where many Haitian immigrants lived, many without documents, was completely demolished. Not a single house was left standing.

Bahamian Prime Minister Hubert Minnis, speaking through a Creole interpreter, tried to reassure Haitians waiting for a boat to Nassau, the capital of the Bahamas, that the government would treat them fairly. This was a hard sell, as in 2018 the Bahamian Royal Defense Forces helped deport 1,172 Haitians.

The Family Action Network Movement of Miami, together with a number of Haitian community organizations, wrote an open letter to PM Minnis, asking for “a moratorium on all deportations and refrain from asking for work permits when immigrant families seek assistance​.”

A number of  countries are in the process of sending aid to the Bahamas. According to Telesur English, Cuba immediately sent 60 doctors and teachers to help. They will stay as long as is needed.

Socialist Cuba has much experience in minimizing the danger to its people from  intense storms. It is recognized internationally for its ability to relocate people away from the coast when a hurricane approaches. Every family is paired with another further inland, who shelter them until it is safe to return home.

China is preparing to make a major infrastructure investment in the Bahamas and will help with recovery efforts. Caricom — the Caribbean Community — has had a presence in the Bahamas even before Dorian hit.

Imperialist countries with colonies in the Caribbean — France, Great Britain, the Netherlands, the United States — have promised money and sent rescue teams.

Although press releases from U.S. government agencies have touted their assistance during the climate catastrophe, the efforts made and the money spent are pitifully small when compared to the huge Pentagon budget for wars and interventions on behalf of U.S. imperialist profiteers.

Florida and the Bahamas

Florida only became part of the U.S. in 1821. While slavery existed there, enslaved people fled for their freedom to the British Bahamas, only 40 miles away. This was especially the case after 1834, when England abolished slavery. Many Bahamians later migrated to southern Florida in the 1930s and 1940s when it was developing its tourist and citrus industries.

However, hundreds of Bahamians hoping to reach Florida after the hurricane were forced off ferries on Sept. 8 for lack of a visa, a previously unnecessary document. (tinyurl.com/y3zn9zyt)

The Washington Post reported on Sept. 6 that 26 overloaded small boats had been seen leaving the Bahamas and heading west. Bahamian Prime Minister Minnis has made it clear that the capital city, Nassau, can’t accept all the people who now want to leave the islands of Grand Bahama and the Abacos.

The official death total was 44 as of Sept. 8, but Minnis said this preliminary figure will rise — likely significantly — once heavy equipment needed to remove debris reaches the islands. A nonofficial website collecting the names of all the missing has 6,500 entries. Anecdotal press accounts mention many bodies scattered about. The full horror of this disaster is yet to be revealed.