What is needed in the coming period is for the working class, the unions, the unorganized, in various organizations and communities, to overcome disunity and passivity in time to fight back and push the crisis onto the backs of the bosses.

There is endless speculation now about whether or not Trump’s policies, particularly the trade war with China, are causing or accelerating the downturn. But to be clear, should there be a downturn, capitalist overproduction would be its cause. 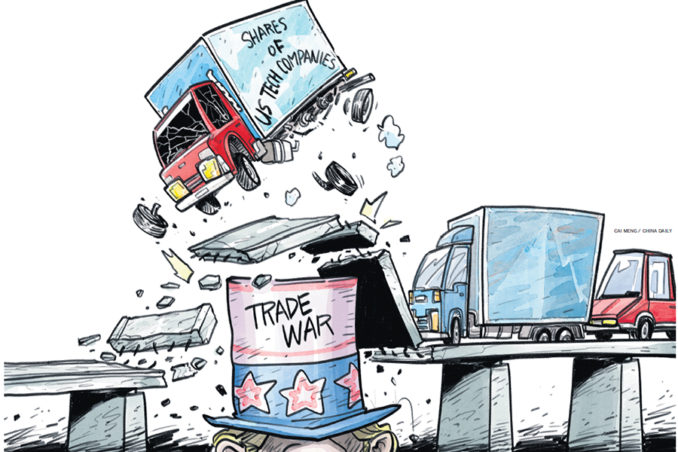 What is driving the trade war and the tariffs, which are really a tax on the working class in the U.S. as well as in China? Trump is desperate to create the jobs he promised in his election bid in 2016. He thinks his reelection depends on it. He thinks that a tariff war will force U.S. corporations back to the U.S., where they will offer new jobs. This is Trump’s fantasy. It is utterly false and based upon total ignorance.

U.S. corporations have rushed to position themselves in China over the years. China’s workers had relatively low wages, and there was a vast population of peasants streaming into the cities, along with a growing educated population and a strong infrastructure built by the socialist government. China provided both a vast internal market and a platform for exporting commodities to third countries, including the U.S.

In short, being in China was profitable for U.S. business, and it still is. The corporate bosses will not give up their profits just because Trump tells them to. Of course, many of them wish that they could get out of China for other reasons: Wages are rising. There is communist influence on the workers. The bosses fear the strength of the Chinese Communist Party (CCP), and they hate to conform to rules and regulations laid down by the CCP and the Chinese government.

Some bosses are trying to find low-wage alternatives in Vietnam, Bangladesh, Indonesia, Singapore and other places. But shifting supply chains, finding infrastructure and breaking up production patterns is not as easy as Trump makes it sound.

Giant corporations like Boeing, Caterpillar, Apple, GM, GE, among others, have large capital investments in China. Many of them were counting on a full-scale capitalist takeover, which would have allowed them to dominate China. But it is clear that such an overturn is not happening.

Trump’s tactics in the trade war with China also reflect the deep and growing hostility of the U.S. ruling class toward China, especially its socialist structure and its increasing political, economic and military influence in Asia and the world.

Capitalist overproduction is the problem

In their attempt to shore up the U.S. economy, Trump and the ruling class are really up against capitalism itself. The capitalist economy operates according to its own laws.

Marxism shows that consumption and production are indissolubly linked. It also shows that every downturn begins, not with a decline in consumption, but with a decline in production. Where production declines, profits decline, and capitalists rush to protect their profits by hitting the workers with layoffs, wage cuts, cuts in hours, elimination of benefits — whatever it takes to keep profit margins from falling or to slow the fall.

Why are the other imperialist countries — Germany, Britain, France, Italy, Japan, among others — either in a manufacturing decline or headed toward one? There is only one reason. There is a decline in markets for manufactured commodities.

China, a socialist country, is not in a depression, but the rate of growth in the economy has declined from 5.7 percent in December 2018 to 5.5 percent in February 2019. But this is still a higher growth rate than anywhere in the world capitalist economies. (Reuters, Business News, March 13, 2019)

The enormous productivity of labor makes it such that the masses of the working class cannot buy back all that they produce. High technology in production has aggravated this situation and has made the crisis of overproduction worse. With automation, fewer workers produce more commodities and services in a shorter time. This is what accounts for the vast number of workers who are excluded from  the unemployment statistics — those who have dropped out of the official workforce altogether, who cobble together part-time jobs off the books to live and use other means to survive.

Any talk of downturn, recession, depression, etc., should set off alarm bells among the more advanced workers. It should be a clarion call to workers’ leaders, wherever they are, to start organizing to fight back.

Workers must demand to keep their income flowing by whatever means available, whether payments by the capitalists out of their profits and savings, or by the government directly through jobs programs. An economic downturn is an emergency for workers. It should be treated as such.

The University of Michigan Consumer Confidence report, which is the capitalist’s gold standard, has shown a drop in popular economic confidence in the future. That indicates a further threat to consumption.

Amazon and other online retailers have driven out brick-and-mortar stores and closed down malls. These devastating events, driven by high tech, may pump up the bottom line at Amazon, but at the same time they spread unemployment and poverty across the country.

The number of workers in stores and malls who are laid off far exceeds the number of workers put to work at Amazon fulfillment centers or Fedex or UPS. When a store or a mall closes, retail workers lose their jobs and so do maintenance workers, window and floor designers, fast food workers who served the customers in the malls, and more. No matter how you slice it, workers take a beating when online retailers drive stores and malls out of business.

The contradictions of capitalist exploitation have raised a dire threat to the working class and the capitalist economy. Trump should be ousted because of his unspeakable racism, misogyny and bigotry, as well as his vicious anti-immigrant policies. But the real problem is capitalism itself.