Planned Parenthood, the nation’s largest provider of comprehensive reproductive health care for poor women, took a bold stand of resistance Aug. 19 against the Trump-Pence administration’s latest volley in the war on women.

It refused to go along with the Department of Health and Human Services’ new “domestic gag rule,” effective Aug. 19, which now requires that all health care participants in the $286 million Title X program not refer patients to abortion providers. And if facilities do offer abortion care, that must be physically and financially separated from other services. 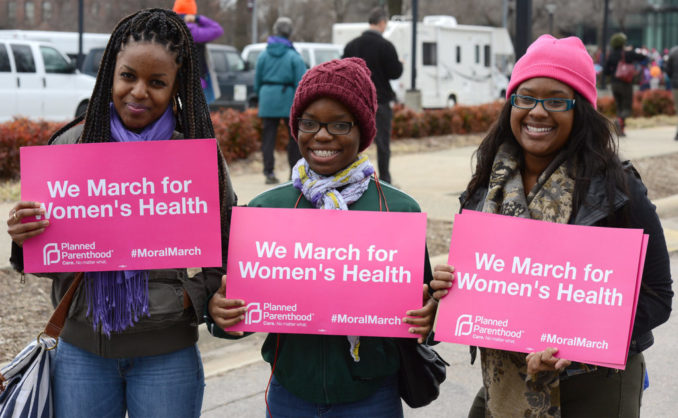 One of many protests to defend the right to reproductive health care.

Planned Parenthood has been part of Title X since its inception in 1970. It is the largest provider, serving about 40 percent—​more than 1.5 million women and gender-oppressed people—​of the 4 million patients who receive birth control and pregnancy tests, as well as screenings for sexually transmitted infections and breast and cervical cancer. The Guttmacher Institute estimates that Title X prevents thousands of unplanned pregnancies each year—​822,000 in 2015 alone. Planned Parenthood receives about $60 million annually through Title X and $500 million from Medicaid, a joint federal and state health care program for poor people. (For more background, see WW articles posted March 5 and 15, June 30 and July 21.)

‘We will not be bullied’

“[D]ue to an unethical and dangerous gag rule, the Trump administration has forced Planned Parenthood grantees out of Title X,” stated Alexis McGill Johnson, acting president and CEO of the Planned Parenthood Federation, at an Aug. 19 press conference.

The DHHS responded “with sneering glee” by blaming the organization for “abandoning their obligations to serve their patients” under the eviscerated program, which now violates the doctor-patient relationship. (Guardian, Aug. 22)

McGill Johnson asserted: “Planned Parenthood is still open. … [W]hile the Trump administration may have given up on you, we never will.” However, she noted that patients may have to wait longer for appointments and pay higher fees.

But she stressed that the gag rule “would make it impossible for us to uphold that commitment. … We will not be bullied into withholding abortion information from our patients.”

And “bullied” is the name of the Trump-Pence game. The administration’s ultimate goal is to have the Supreme Court overturn Roe v. Wade, the decision that legalized abortion in 1973, and the new rule is a giant step toward that end. It also helps reinforce the abortion stigma.

Another aim of the administration’s game is to significantly change the purpose of Title X—​to provide comprehensive family planning—​so that now faith-based groups that oppose abortion and contraception are eligible for funding. Obria, a network of anti-abortion “counseling centers” which does not provide contraception or medical care, received a Title X grant this year to the tune of $1.7 million.

The DHHS rule is being challenged in court by Planned Parenthood, the American Civil Liberties Union, other legal and medical organizations, and more than 20 states. But a federal appeals court ruled in July that the policy change could take effect while legal cases were pending. Although Planned Parenthood and other providers wanted to accept Title X funding until the legal challenges were settled, DHHS demanded all or nothing by the Aug. 19 deadline.

Illinois, Maryland and Washington state have volunteered to fund clinics that drop out of Title X, and governors of New York, Hawaii and others are exploring how to do that. Meanwhile, reproductive justice groups around the country are rallying behind Planned Parenthood’s decision.

‘Coercion by the government’

Jessica Pinckney, vice president of In Our Own Voice: National Black Women’s Reproductive Justice Agenda, nailed the Trump-Pence rule as “coercion by the government” which will “disproportionately affect the health and lives of Black women across the country.” (Rewire News, Aug. 19)

What kind of government deliberately limits access to essential health care to a sizable portion of the population? The same kind of government that, while professing to be “pro-life,” forces migrant children of color into squalid cages under inhumane conditions. And a government that allows 16 million kids to go to bed hungry every year.

The original Title X program, instituted in 1970, was a progressive cover for the Nixon administration while it waged war against the Vietnamese people. Now under the Trump-Pence government, obvious racism, misogyny and bigotry are ordered by an increasingly desperate, dead-end capitalist system that assures profits for the rich and hopes to scare the rest of us into submission.

But resistance is rising—​against Immigration and Customs Enforcement, wage theft, sexual harassment, climate change and more. The demand for women’s equality in all aspects of life is growing stronger day by day.