On Aug. 18, the 39th Southern African Development Community Summit of the Heads of State and Government held in Dar Es Salaam, Tanzania, declared Oct. 25, A Day of Solidarity to Lift the Illegal Sanctions Imposed on Zimbabwe. The 16-member states of SADC have resolved to conduct actions in their countries to vigorously work toward that objective. 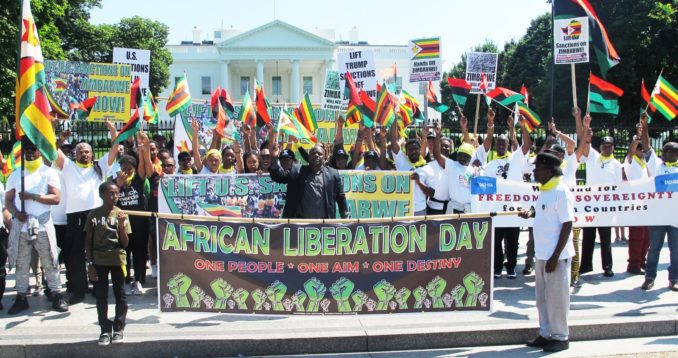 The SADC Secretariat is reaching out to the African Union chairperson, Egyptian President Abdel Fatthah el-Sisi, to push the African Union to support the anti-sanctions issue and for it to be discussed at the 74th United Nations General Assembly in September.  As Executive Director Dr. Stergomena Lawrence Tax stated at the summit: “The embargo is militating against economic growth in both Zimbabwe and the region.”

Omowale Clay, spokesman of the December 12th International Secretariat based in New York, told this reporter, “We are clear that this powerful show of solidarity and action by SADC helps to expose the lie that sanctions on Zimbabwe only targeted individuals rather than their real purpose to crash their economy in the hopes of fostering ‘regime change.’

“These sanctions have challenged the economic growth of Zimbabwe by cutting off its foreign trade, and as a result, created a shortage of foreign currency which compromises government’s ability to acquire life-sustaining necessities such as medicines, water purification equipment, heavy industrial equipment, fuel and many other necessities — sanctions kill!”

Clay went on to say, “After the fight for independence from the British (Rhodesian) colonizers in 1980, over 80 percent of the arable land was still held by settlers who were less than 5 percent of the population. In 1998, Zimbabwe enacted its land reform program and the land was finally returned to indigenous Zimbabweans who fought and died for it.

“The ZDERA [Zimbabwe Democracy and Economic Recovery Act] sanctions implemented by the U.S. violate international laws protecting national sovereignty. ZDERA falsely states that the small, landlocked nation of Zimbabwe is a ‘threat to the national security of the United States.’ The U.S. sanctions must end now. It is a matter of life and death.

“This bold and united action by SADC on Oct. 25 will help mobilize Africa and the Pan-African community against the criminal intent of sanctions — a Western weapon against the self-determination of developing countries and further expose Western efforts at recolonization,” Clay concluded.

Incoming SADC Chair, Tanzanian President Dr. John Magufuli, stated in his closing remarks to the summit, “We are all aware, this brotherly and sisterly country has been on sanctions for a long time. These sanctions have not only affected the people of Zimbabwe and their government but our entire region.”  (thezimbabwedaily.com, Aug. 17)

On Sept. 21, the December 12th Movement will lead a march and rally at 12 noon to End the Sanctions in Zimbabwe at the 74th Session of the General Assembly of the United Nations in Dag Hammarskjold Plaza on 47th Street and First Avenue in New York City.

All 193 member states of the United Nations are represented in this unique forum to discuss and work together on international issues covered by the U.N. Charter, such as development, peace and security, international law, etc.