Three young activists, biking across the U.S. from Los Angeles to New York City, stopped in Philadelphia on Aug. 26 to raise awareness about the issue of justice for women once held in military sexual slavery by Japan. As part of the Triple A Project to educate the public about the women, bikers Hyosin Ki, Dohoon Nah and Hayan Lee, along with several area activists and community members, handed out hundreds of brochures to students on the University of Pennsylvania campus. 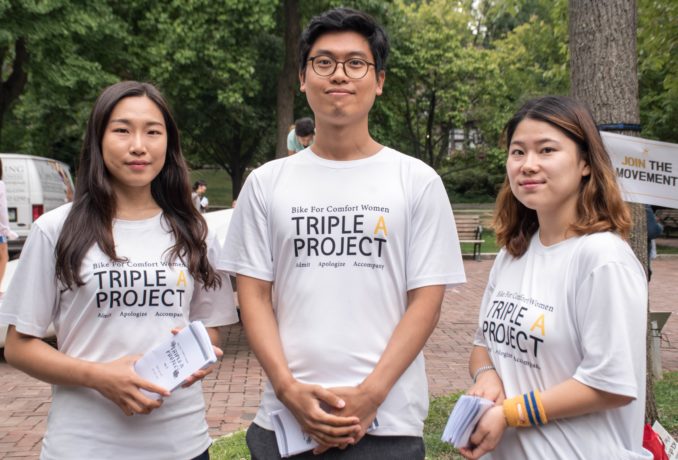 Between 1932 and 1945, the Japanese military forced thousands of young women to serve as “comfort women,” a Japanese euphemism for prostitutes. Most of the women came from countries occupied by Japan, including Korea, China and the Philippines.

The young women held in captivity could not protest or refuse, though individually they were sometimes assaulted as much as 80 times a day. Refusal meant immediate punishment and torture. Those who attempted to escape were publicly killed. Estimates by Japanese historians of those placed in this servitude vary widely between 20,000 to 400,000 women.

At the end of World War II, government-run brothels were set up by Japan for U.S. troops, exploiting tens of thousands of women rendered destitute by war. The Japanese government tried to destroy all documents and evidence that this military program of sexual slavery had existed.

However, the war never ended for “comfort women.” Survivors lived with psychological distress, physical consequences and shame. Some committed suicide. Many lived out their days ostracized by family and community. Most hid their nightmarish experiences.

The surviving women are in their nineties today, with only 21 known to still be alive in South Korea. Time is running out for an official admission of guilt by the Japanese government. Though Japan has officially expressed “sympathy” for the women and issued a type of apology, the government stance is that the women were only “victims of human trafficking.” There is steadfast denial that the Japanese military set up a system of sexual slavery.

Monuments and statues have been constructed in remembrance of the women, including a statute placed in front of the Japanese Embassy in Seoul, south Korea.

The young bikers passing through Philadelphia brought awareness by placing artwork by the women on the lawn of the Penn campus. A Philadelphia artist’s large paintings of the women were also exhibited, along with some photos of them.

The biker activists want the Japanese government to admit that it forced women from colonized and occupied territories to be sex slaves in World War II and to acknowledge and apologize for these serious human rights crimes against the women.

They say their trip is in solidarity with the hearts and souls of the women and ask readers to join in that at tinyurl.com/y4kuuabs.