In August a fascist murdered 22 people in El Paso, Texas, and there were two other fascistic massacres in Dayton, Ohio, and Gilroy, Calif. Trump and his racist supporters continue to sink the U.S. into a mire of bigotry, which threatens more bloody massacres of working people.

Now Trump has accused the anti-racist movement of violent aggression, instead of the murderous racists whom Trump himself has put into motion. An Aug. 17 tweet by Trump actually branded Portland, Ore., anti-racist Antifa (anti-fascists) an “organization of terror.” 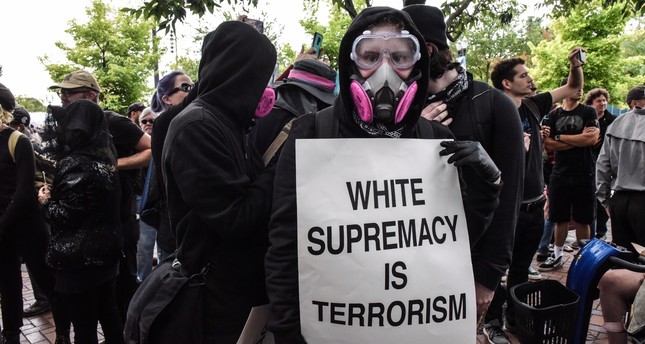 Portland anti-racists, including Antifa, gathered Aug. 17 to counter a national mobilization there of white supremacist and neo-Nazi hate groups called for that day.

These organizations, such as the Proud Boys, came to Portland from around the U.S., together with local hate groups already in the area. The Proud Boys, named a hate group by the Southern Poverty Law Center for spreading the poison of white supremacy, misogyny and Islamophobia, was part of the 2017 Charlottesville, Va., Unite the Right rally, where a neo-Nazi killed anti-racist Heather Heyer.

A white man who was influenced by these groups stabbed and killed two men and wounded a third on a Portland light-rail train in 2017. The fascist was terrorizing two young women—​one wearing a hijab, the other a Black woman. The three men were attacked after they defended these women.

The Aug. 17 pushback began at a downtown waterfront park with the progressive community holding a rally. Some carried signs reading, “Heather Heyer Presente,” honoring the martyr of the anti-racist counterprotesters in Charlottesville. Others carried signs which read, “White supremacy is terrorism.” Portland NAACP President Rev. E. D. Mondainé led the crowd in singing a marching song of the Black Freedom Movement, “Ain’t gonna let nobody turn us around!”

When the fascist Proud Boys, Patriot Prayer and others appeared at the south end of the park, a crowd of at least a thousand militant anti-racists headed for them. The anti-racists were led by groups like Rose City Antifa. But their march forward was stalled by barricades and a line of cops protecting the fascists. Over 700 cops were deployed from two dozen police agencies, including the FBI.

After a face-off of about an hour, the several hundred fascists were “evacuated” by police. A well-publicized photo in the big business media that seemingly showed the fascists parading on Hawthorne Street Bridge was actually a picture of fascists in retreat. Sgt. Brandon White of the Multnomah County Sheriff’s Office said of the police protection, “It wasn’t orchestrated. We had a request that they would like to leave the area, and we facilitated.” (tinyurl.com/y4gg6yqk)

In fact, as usual, the cops bailed the fascists out.

After the hate groups retreated, anti-racists continued to occupy the area for the rest of the day. They marched through downtown Portland, blocked traffic and took some arrests from the heavy police occupation. Later on, anti-racists repelled some individual attacks from frustrated bigots who came back over the bridge.

The fascistic demonstrators tend to show up at demonstrations with guns and other weapons, but the Portland anti-fascist movement has dealt with that before. The resilient, multinational, mostly young crowd was courageous, putting their bodies on the line in the great struggle against racism and bigotry.

When racism is finally defeated, the pillars of capitalism will begin to crumble and fall, because the workers will be united. And the workers united will never be defeated.