The agreement relies on an exemption in U.S. laws on asylum application that invalidates applications from migrants who pass through so-called “Safe Third Countries” en route to the U.S. However, the law provides no definition of a “safe third country,” and until now the only country to have signed such an agreement is Canada.

In Guatemala, critics of the agreement — including both second-round presidential candidates, the Constitutional Court and social movements — have argued that there is no way that Guatemala could be considered a safe country.

One of the most repeated points raised against the agreement is the simple fact that Guatemalan nationals themselves are a large percentage of the migrants arriving at the southern U.S. border. The violence, poverty and climate-change-induced droughts that cause people to flee the country are cited as evidence that Guatemala is not equipped to receive the asylum seekers the U.S. plans to send it.

Guatemalan Minister of Foreign Affairs Sandra Jovel stated during an Aug. 6 public meeting with one of the presidential candidates that she could not disclose the estimated number of migrants the country would be expected to receive, due to concerns that human trafficking networks might use that information. (tinyurl.com/y3pmhtdc — in Spanish) If Guatemala were truly a “Safe Third Country,” there would be no reason to hide this information from organized crime! 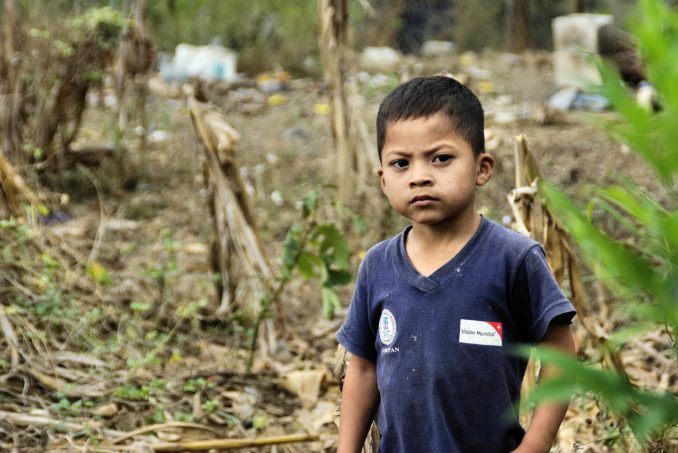 Poverty and climate-change-induced drought cause families to flee Guatemala.

U.S. tries to hide its crimes by exporting them

The U.S. government, with its expansive intelligence apparatus and historical control over the region, is perfectly aware that Guatemala is unprepared and unable to meet the humanitarian obligations of feeding and housing asylum seekers.

However, the conditions in the U.S. border concentration camps and the president’s encouragement of extrajudicial violence against Latin Americans are enough to show that the U.S. does not actually care about crimes against humanity committed against migrants.

The true purpose of the Safe Third Country agreement is to create a layer of plausible deniability with respect to the treatment of migrants. Instead of building concentration camps on the border with Mexico, they would rather turn Guatemala itself into such a camp.

The neocolonial relationship between Guatemala and the U.S. means that even if the U.S. washes its hands of the concentration camps by exporting them to Guatemala, the same white supremacist, imperialist, capitalist ruling class is designing the policies.

This is not the first instance of the U.S. trying to sanitize its image without fundamentally changing its anti-migrant policy. Earlier this year, threats of tariffs and even stricter border controls forced the Mexican government to implement harsher security measures against migrants travelling through on their way to the U.S.

As soon as the news broke that the Guatemalan government was in negotiations to sign the anti-migrant agreement with the U.S., the Constitutional Court issued a ruling that any such agreement would require congressional approval.

This move was intended to delay or even block the agreement, while forcing the government to make its intentions public and allow for democratic debate. It was significant enough that President Jimmy Morales was forced to temporarily back off and make public statements denying that he was negotiating any agreement, although he had scheduled a trip to Washington that same week without stating a reason.

The response from the White (Supremacist) House was to almost immediately threaten to freeze remittances, impose tariffs or even impose a travel ban on Guatemalan nationals. A few days after Donald Trump announced that these options were being considered, the Guatemalan interior minister signed the agreement, without any congressional input.

Beyond demonstrating the cowardice and subservience of the Guatemalan ruling class to the interests of U.S. imperialism, this series of events illustrates the mechanisms of imperial control in Central America.

Guatemala is primarily an export-oriented agricultural economy, growing coffee, bananas, palm oil and other cash crops for sale on the international market. The U.S. is the single biggest customer for Guatemala, absorbing approximately 40 percent of its agricultural exports.

On the other side of the economic relationship, remittances (money sent to Guatemala from citizens living in the U.S.) account for approximately 12 percent of the country’s gross domestic product. Many families, especially in rural areas, depend on relatives living and working in the U.S. for a major or even primary source of their income.

Between its ability to export products and a heavy reliance on remittances, the Guatemalan economy is doubly dependent on its northern neighbor. This double dependency becomes a triple dependency when one accounts for foreign capital investment. This forms the economic basis of the political subservience of the Guatemalan ruling class, who are really junior partners in the business of exploiting Guatemalan workers and peasants.

The people of Guatemala, unlike its rulers, have never accepted imperial decrees, whether from Spain, England or the U.S., without a fight. The response to this most recent decree has been no different, and mobilizations began almost as soon as images appeared in the news showing the interior minister signing the agreement.

The public outcry has been so great that both presidential candidates in this month’s runoff election have been forced to publicly condemn the agreement, though they are unlikely to put up any real opposition after the election.

Because of the Constitutional Court ruling, several special sessions of Congress were called to ratify the agreement. The first was disrupted by students at the public University of San Carlos (USAC), who prevented the session from voting. Another session was called for two days later. It failed to reach a quorum after an even larger protest, once again led by the students, formed outside the building where it was being held.

While demonstrating against the agreement, the USAC students began an occupation of the campus, with the twin demands of dropping the agreement and rolling back measures they fear are a precursor to privatization of the university. This occupation has spread quickly, with students occupying 24 university centers across the country.

The occupation has included university clinics, so medical students have set up community clinics to continue providing checkups for surrounding communities.

On Aug. 6, protesters blocked roads in most regions of the country, rejecting the agreement, standing in solidarity with the students, and raising several long-standing demands, such as renationalization of the electric company. The action was called by CODECA, an Indigenous and campesino organization whose presidential candidate, Thelma Cabrera, had shocked the political establishment by winning fourth place in the first round of presidential elections.

The Guatemalan government has stubbornly refused to back down from the Safe Third Country agreement — its masters in Washington have left it no choice. But the righteous anger of the Guatemalan masses over this injustice is quickly becoming too great for the government to control, even with the backing of the U.S.