Coal miners are up in arms again. This time they are not unionized, but they are taking on the sixth-largest coal company in the U.S., and the United Mine Workers of America (UMWA) is helping them out. (@MineWorkers)

The miners demand payment for lost wages from a bankrupt coal company, Blackjewel LLC. The company was supposed to post a bond with the state of Kentucky guaranteeing workers’ wages without penalty, but failed to do so. Not only have the miners lost wages, but for several months Blackjewel paid no deposits into their 401(k) retirement accounts. (thinkprogress.org) 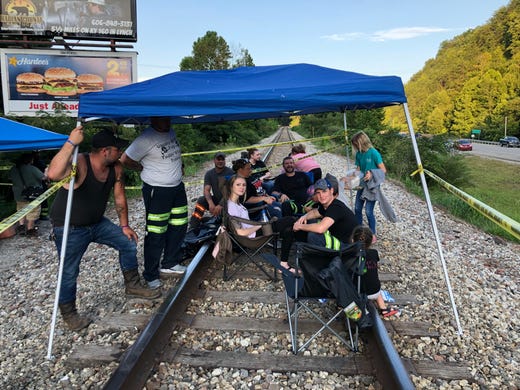 Miners block railroad tracks leading out of Blackjewel mine

Typical of many unorganized workers rising up these days — Amazon workers, Lyft and Uber drivers, fast food and Walmart workers demanding an end to sexual harassment and a $15 minimum wage — these mineworkers are taking their fight to a new level; they are using social media to gain recognition and support.

On the first day of their work action, July 29, five miners using Twitter and Facebook organized themselves to block a coal train leaving a Blackjewel mine near the town of Cumberland, Ky. Standing on the tracks as a locomotive pulling a long train of filled-to-overflowing coal gondolas bore down on them, they held a sign made from a pizza box: “No Pay We Stay.” The miners intended to hold the train hostage until they were paid the wages they were owed. (wfpl.org)

Blackjewel and CSX railroad called the police, who told the miners to leave. The miners left — moving down the track, but not off it. They tweeted for reinforcements, and nine more miners came.

Again, the police told them to leave. They moved farther down the tracks and reached out again. This time dozens more miners, family members and friends came, eventually numbering hundreds, with more arriving by the hour.

The police could do nothing.

As of Aug. 5, the miners now have a large and growing encampment on and alongside the train tracks. They have tents, food distribution and portable toilets. They play games like cornhole, played by pitching bean bags, horseshoes and cards. Besides socializing, they tweet and post to Facebook and other social media 24/7. (courier-journal.com)

Former Blackjewel miner Shane Smith told WFPL radio in Louisville, “If they can move that train, they can get us our money.” Mineworker Bobby Sexton said, “It’s a little bit of a good feeling of accomplishment [to hold the train], but we still ain’t done. We’re gonna stay here until we get some answers.”

The miners are demanding the bankruptcy court order the company to pay them wages for the coal that Blackjewel stockpiled and tried to move off the mine property for sale on the global market. Further, the miners say they have first dibs on the money to be made from the sale of that coal — because their last paychecks bounced, costing them thousands in overdrafts and bank fees.

Blackjewel had drawn down the funds in its payroll bank account to $0, making the last checks they paid the workers no good. Meanwhile, the bankruptcy court judge allowed the company $8 million in cash withdrawals from other company funds. (wpfl.org)

WYMT, another eastern Kentucky news outlet, has reported that Blackjewel was sold Aug. 3 for $59 million. In all, 1,100 mineworkers in Kentucky, West Virginia and Virginia are owed $11 million in back wages, in addition to the money Blackjewel stole by failing to make 401(k) deposits.

The miners have set up a Blackjewel Bankruptcy Victims GoFundMe (tinyurl.com/y4obclgy), asking for contributions to help with their Cumberland encampment and for emergency funds for miners’ families.