Under the slogan “CNY Stands Against Racism,” about 50 people gathered in downtown Syracuse to protest the virulent U.S. racism that enforces life-threatening im/migrant camps, the deadly prison-industrial complex and the unjust criminal “justice system.” One speaker pointed out that all these structures break up families and attack the most vulnerable. 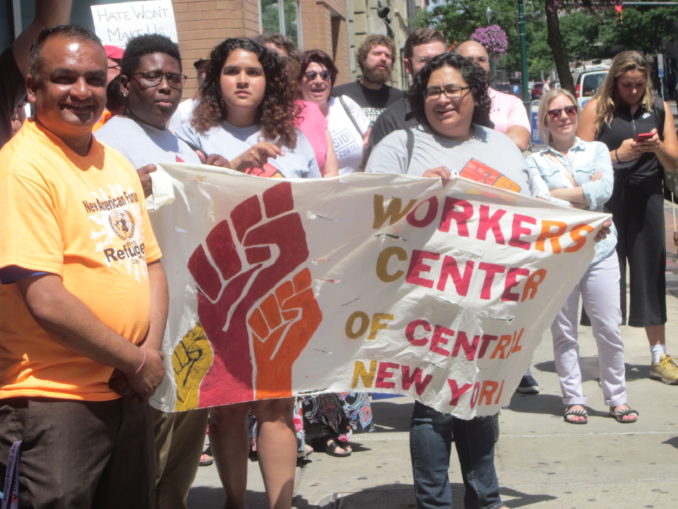 Coming out against racism in Syracuse, N.Y., July 23.

The protest specifically targeted local U.S. Rep. John Katko, a Republican who refused to vote for the recent House amendment denouncing President Trump as a racist for his white supremacist remarks about four congresswomen of color. The rally emcee, Kayla Kelechian, from the Workers’ Center of Central New York, said:  “We see these four women whom he attacked, all from different backgrounds. Some natives here, some who came here when they were younger. He’s attacking everybody. Racism is not just an immigrant issue. It’s here at the local level as well.”

A speaker who identified himself as being from the local Jewish community emphatically said that they had seen this path before, the condemnation and punishment of an entire people, and he was there to emphasize: “Never Again Is Now.”  To drown out passing hecklers, the crowd repeatedly chanted: “Close the camps, close the camps!” and “The people united shall never be defeated/¡El pueblo unido jamás será vencido!”