By Sean Orr
Caracas, Venezuela
Reprinted from Fight Back! News

From July 25 to 28, over 1,000 delegates gathered for the 25th Sao Paolo Forum in Caracas, Venezuela. Historically the largest gathering of the Latin American left, the Forum was transformed this year by its hosts into an assembly of revolutionary parties and movements from around the world, with the sole focus of how a new global revolutionary offensive can be launched against imperialism. 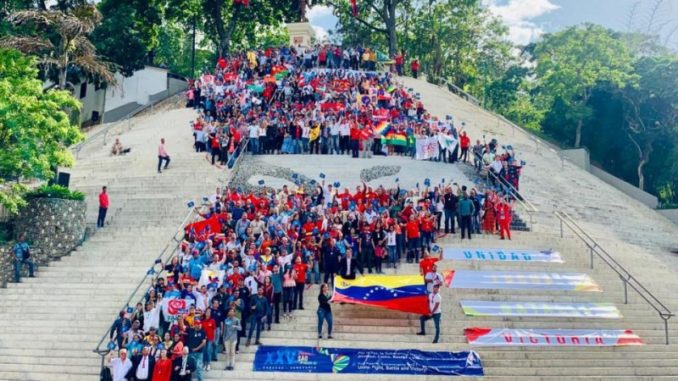 Delegates to the Sao Paulo Forum.

The range of invitees was spectacular. There were representatives from every socialist state and Latin American nation, along with revolutionaries from Palestine, the Philippines, Spain, the Basque Country, Russia, Ireland, South Africa and every Latin American nation. Everywhere you walked in central Caracas, you would see these fighters from around the world meeting each other, debating, discussing the lessons they have learned in the struggle against imperialism. Some were high-ranking politicians, others were rank-and-file workers, some were very old, and others were quite young. All referred to each other as comrade.

There have been hard defeats in recent years. Delegates often referred to “the countries we have lost” in the continental rollback of the Pink Tide. There was much talk about Lula da Silva, the former president of Brazil and co-founder of the Sao Paolo Forum, who now sits in prison as the victim of a far-right coup. Members of the FARC and other Colombian revolutionary groups attended, standing as a reminder of their hundreds of comrades murdered by the state since the Peace Accords were signed. Their very presence was an act of bravery.

But recent events have affirmed the words of worker President Nicolás Maduro, who declared that a new tide would wash across the Americas, an offensive deeper and more radical than the last, that would strike deep at the heart of U.S. imperialism. In just the past few weeks, these words have been made material in the fearless fight of the Puerto Rican people, who appear to be poised to engage in the fiercest struggle against their colonial subjugation in decades.

Representatives from Mexican parties and trade unions reminded the Forum attendees of the change underway in their country, now led by a president who is committed to respecting the self-determination of all Latin American countries.

Yet, the greatest sign that revolution is on the rise and imperialism is in its death throes is the honest fact that the Bolivarian Revolution continues to stand, and stand tall. Since the beginning of 2019, imperialism and its lackeys have organized coup attempts, launched terrorist attacks, sabotaged electrical grids, robbed billions of dollars from the Venezuelan people, and have harshened sanctions at the cost of over 40,000 lives. The bourgeoisie, at home and in the United States, want the masses to suffer and die for having the gall to stand up and demand their freedom. Yet in every battle they have declared against this peaceful nation, they have been soundly defeated. The Venezuelan masses are on the march, and they are not stopping. Over the course of the Sao Paolo Forum, they celebrated the very fact that they themselves were the hosts of this international gathering, another victory.

What did the international delegates learn about the Venezuelan nation, and why it must be defended? They learned that over the course of imperialism’s vicious offensive, nearly 3 million families were taken out of the slums and provided with new, high-quality homes (5 million families is their goal by 2025). That, despite international economic strangulation, the state has dedicated nearly 75 percent of its revenue to social services, more than any other country on earth. That they are on track to achieve food sovereignty within six years, forever severing their dependence on U.S. agribusinesses. They learned that over 3,000 communes, tens of thousands of housing assemblies, nearly 50,000 communal councils and nearly 2 million militia members represent the now-existing embryo of a new, revolutionary state; that the working class is the vanguard of the Bolivarian Revolution, and it is with their leadership that a new economy will be built and the bourgeoisie will lose their hold on society.

In short, they learned that Venezuela is a breakthrough to the future we all desire, and it must be defended at all costs.

Over the course of the four days, there were cold reminders of what is at stake for the Venezuelan movement. The opening day of the Forum corresponded with the anniversary of the murder of Jorge Rodríguez, a young and inspiring revolutionary who was tortured to death by the Venezuelan secret police in 1976. Among the hundreds of attendees at his memorial were his comrades, former cadre of the Socialist League who had dedicated their lives to revolution and now all belonged to the United Socialist Party (PSUV).

Although the Bolivarian Revolution has been in power for 20 years, when you speak with these lifelong fighters you realize that the brutal past is not too far away. More than once, you could overhear people who had been comrades for decades forget each other’s names. They had lived so many years in the underground that they only knew each other by their red names. Fernando Soto Rojas, the League’s leader for many years, made the solemn joke in his speech that it still feels strange to speak before a crowd and mention his comrades by name. For far too long, something as casual as telling someone who your friends are could have been a death sentence.

Then, on the closing day of the Forum, news came out that six Venezuelan revolutionaries had been assassinated in the rural west. A class war has been waging across Venezuela, and is being fought with bullets in the countryside. From their rural strongholds, the big landowners look favorably on the genocidal tactics of their Colombian counterparts and deploy them without a second thought. To be a revolutionary in Venezuela is still a dangerous act — and yet there are millions of them.

All delegates left Caracas feeling emboldened and ready to carry on the fight until imperialism is pushed out of all territory on this earth. While there were not many of us from the United States, our presence was appreciated by all. To more than a few, it was a surprise to know that there are revolutionaries on the other side of Trump’s wall. Yet we are here, and our numbers must multiply, and it is on all of us to organize ourselves as workers and freedom fighters and link arms with our comrades around the world. Our enemy is united in its desire to force upon us a wretched system, the offspring of slavery and colonialism and genocide, that has no right to exist on our planet anymore. Let us, too, unite, so that humanity can enter the future that it must.

Sean Orr is a member of the Freedom Road Socialist Organization to the Sao Paolo Forum.