Thousands crowded in front of the governor’s mansion — La Fortaleza — as riot cops, armed to the teeth, locked shields. “The Fortress” was under siege. Here and there, the night sky was aglow with the amber light of distant flames. For 12 days, protesters stormed barricades and braved fusillades of rubber bullets, tear gas and flash grenades. Why? Their demand was the immediate abdication of the governor of Puerto Rico, Ricardo Rosselló. 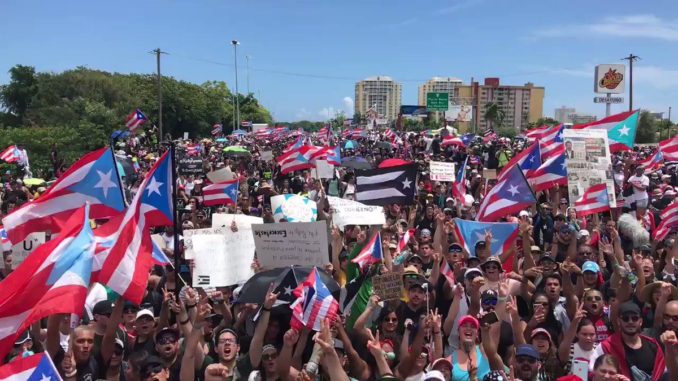 This latest conflagration was sparked by the release of confidential text messages between the governor and his allies. His messages were loaded with homophobic and sexist language and callous “jokes” about the rising death toll following Hurricane Maria. That was the last straw.

Repeated attempts were made to storm the governor’s mansion, and crowds quickly grew from thousands to hundreds of thousands. Rosselló attempted reconciliation, vowing to stay in office but forgoing a reelection campaign. It was not enough.

On July 22, after 10 days of agitation, Puerto Ricans launched a general strike.

Millions shut down the major highway running through San Juan. Two days later, Rosselló announced his resignation. How were the people of Puerto Rico able to unseat the governor in less than a fortnight? And what drove them?

Corporate media have focused on Rosselló, and his despicable comments, out of convenience. Attributing the blame for the current upheaval to one man’s disgusting lack of character is convenient for corporate interests. It obscures the role of finance capital in spurring the pain and anger of the Puerto Rican people. Any accurate recounting of the current crisis must begin at least as far back as 2016.

Underpinnings of the current uprising

The Puerto Rico Management, Oversight and Economic Stability Act, or PROMESA (promise), was enacted in 2016. PROMESA was designed by U.S. federal law to restructure the debt acquired by the Puerto Rican government over the last several decades. The plan was simple: unrelenting austerity.

The unelected PROMESA board members rolled out a plan of crushing budget cuts. Almost 200 schools were closed, pension and health care spending was reduced, and the hourly minimum wage for workers under the age of 25 was reduced to a paltry $4.25 (compared to $7.25 on the mainland). It was clear what was being promised — and delivered — to the Puerto Rican people: humiliation piled on top of indignity.

No peoples could endure such degradation indefinitely, nor could they survive such hardship. Under these conditions, rebellion was inevitable.

What’s worse is that Puerto Rico’s debt crisis was entirely due to the machinations of Wall Street. The Puerto Rican economy was dealt a fatal blow when the manufacturing sector pulled out of the island in pursuit of lower wages. Banks swept in and bought Puerto Rican government bonds which were sold to cover budget shortfalls and provide essential services to the people.

But the economy never recovered and the debt continued to pile up. This was no concern of Wall Street. U.S. law mandates that its colonial property cannot declare bankruptcy the way mainland municipalities can. Instead, federal law forces Puerto Rico to service its debt obligations before paying for essential services. A horrible policy for the people, but excellent for bond traders.

On Aug. 31, 2016, the capitalist class launched a conference at the Condado Plaza Hilton hotel to celebrate their fiscal coup d’état. The people of Puerto Rico used the occasion to express their discontent. As WW reported at the time:

“After learning, on the eve of the protest, that police planned to prevent the demonstrators from arriving, protesters began reaching the site before dawn that day and surrounded all entrances to the hotel.

“Protesters sat in the middle of the avenue and built barricades with stones. They surrounded those who tried to attend the conference and tried to discourage them. Many people turned around. Demonstrators also threw water at some people to discourage them from participating.

“Only a massive police presence — some demonstrators said it was triple their own number — allowed a few people to enter. …  [T]he tactics were so successful that fewer than 200 people attended the business meeting, according to media reports.” (tinyurl.com/yy56jgse)

This was a dress rehearsal for last week’s insurrection. 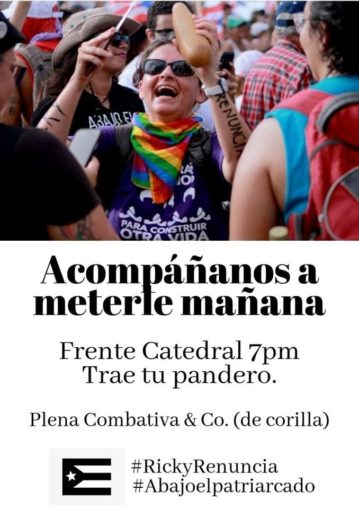 Physical devastation soon followed financial ruin. In the fall of 2017, Hurricanes Irma and Maria struck Puerto Rico. Although the casualty figures were initially downplayed, the rising numbers of dead and missing became too great to hide. A 2018 study in the New England Journal of Medicine calculated the total death toll at an overwhelming 4,645 people.

The hurricane response from the U.S. was callous. While states like Texas and Florida received over $100 million in the first two weeks following severe hurricanes in those states, the U.S. forced Puerto Rico to make do with just $9 million in the same time frame.

At every stage, the destruction of Puerto Rican life and economic stability has been planned and exacerbated by the U.S. government.

So what did Rosselló’s text messages really show? Beyond his bigotry and callousness, it was revealed to the world that money — intended to assist the recovery after Hurricane Maria — was diverted to corporate lawyers and consultants. Confidential information about government contracts was shared with Rosselló’s friends in the private sector. And just three days before the leaks, Rosselló’s former secretary of education was arrested for money laundering.

Secretary Julia Keleher, a Republican from Philadelphia, was a key figure in executing PROMESA’s brutal education cuts. Even schools for the disabled were not safe from her policy of unforgiving austerity.

The people of Puerto Rico were not just beset by sexism and homophobia, but with predatory debt and brutal austerity, climate disaster and disaster capitalism, unfeeling imperialism and humiliating colonialism. The flames of discontent had been smoldering for years before they burst forth to engulf the colonial administration of the island.

The power of the people is extraordinary, and when concentrated, no empire can resist its force.

This article, by an Afro-Puerto Rican activist, is based on a talk at the July 25 Workers World Party meeting in New York City that addressed the theme “Fighting against Racism and for National Sovereignty.”