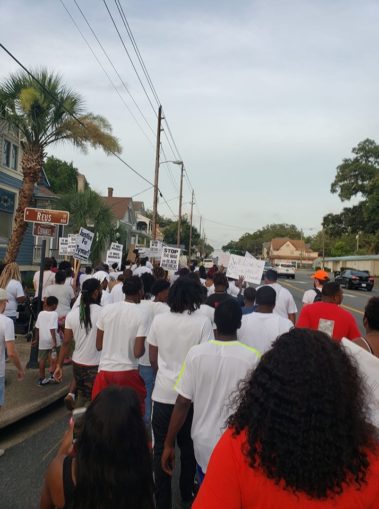 Tymar Crawford, a 28-year-old Black man, was shot dead in his driveway by the Pensacola Police Department on July 5. Police claimed that Crawford attempted to attack them and they shot in “self-defense.” However, Crawford’s fiancee, Kimberly Henderson, and children, who were inside the house and witnessed the entire incident, say Crawford had his hands up when he was killed.

The local media are, of course, promoting the narrative of the police. Arms of the capitalist state will do anything they can to maintain a grip on the people. People aren’t fooled: Tymar Crawford was murdered!

There have been nonstop demonstrations, social media campaigns and rallies to win justice for Crawford. With the Pensacola Dream Defenders in the lead, other groups involved in organizing these actions have been the Answer Coalition, Social Trans Initiative (Strive) and Workers World Party.

Over 600 people, mainly Black Pensacola residents, marched July 15 from Crawford’s front yard to the doors of the Pensacola Police Department. Chanting and waving signs, they shut down a lane of traffic on Cervantes Street, one of the busiest roads in downtown Pensacola. Behind those marching on foot was a steady procession of cars and trucks driven by Crawford’s family and friends.

The police did not attempt to interfere with this powerful action, even when it was brought to their front door. At the station Henderson spoke about the outpouring of love and support she has received and the desire for justice for Crawford.  Dozens of cars driving by honked and waved support.

A list of demands made by Crawford’s family was read: release the names of all cops involved in Crawford’s murder, terminate them immediately,  decrease the criminalization of marijuana possession and loitering, halt random police stops in low-income neighborhoods, create an all-civilian oversight committee with a police commission and civilian complaint office, hold quarterly police training by local organizations, and financial restitution to the family of Tymar Crawford to cover funeral costs.

Pensacola Mayor Grover Robinson already agreed to some of these demands, such as decreasing the criminalization of marijuana possession and loitering, but the police department has refused to release the names of officers involved in Crawford’s murder.

Until all demands are met, protests and disruptions will continue. Tymar Crawford will have justice, or the city of Pensacola will have no peace!