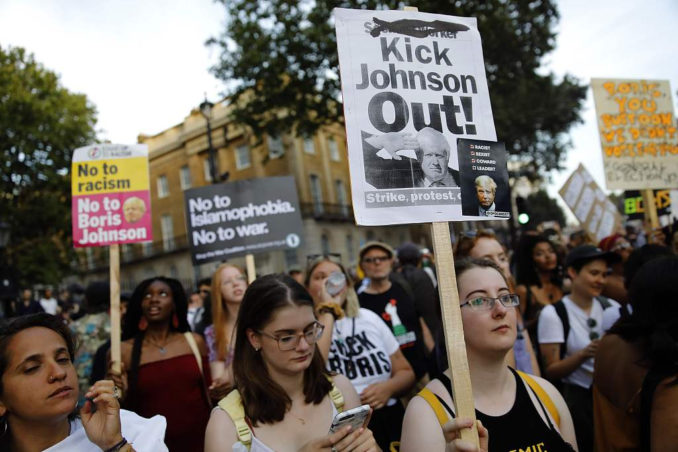 Boris Johnson — whose lies and showmanship were highly influential in having the “leave” option adopted in the Brexit referendum three years ago — won the election July 23 to become Britain’s next prime minister replacing Teresa May. He got 92,153 votes to his opponent’s 46,656.

Voting was restricted to 159,320 dues-paying members of the center-right Conservative Party. Great Britain is a country with over 64 million people, but as Johnson’s election shows, the big decisions are often in the hands of an elite few.

Brexit is the term for the process of Britain leaving the European Union. Brexit has been a contentious issue. Currently all the major British parties are themselves split between a “soft” faction which promotes Britain keeping some formal links with the EU, a “hard” faction that demands rigorous checks of people and goods at all border crossings and a third faction called “remainers,” who want Britain to stay in the EU.

The previous Conservative prime minister, Teresa May, spent two years negotiating “soft” exit plans with the EU. All her proposals were rejected by the British Parliament. Frustrated by these rejections, she resigned and the Conservative Party elected Johnson as the new prime minister.

Johnson has pledged to take Britain out of the EU on Oct. 31, whether or not it has a deal with the EU. He says that this removal would restore the population’s faith in democracy.

Characterization of the EU

The European Union is a free trade zone and also a single market. This allows both the free flow of capital and “the free flow of labor.” An unelected bureaucracy based in Brussels makes economic decisions that serve European finance capital, especially the banks based in Germany and France.

EU rules have imposed wage austerity and budget cuts, dismantled social protections and insisted on deregulation throughout Europe — without input from or consultation with the people these changes seriously affect. Throughout Europe the EU bureaucracy has facilitated the increased exploitation of the working class. The rules hit hardest where the ruling bourgeoisie is relatively weak or the workers’ movement relatively strong — for example, Greece, Portugal, Spain and Italy.

The British ruling class was able to impose its own austerity rules on the workers inside its territory, without relying on the EU bureaucracy. British capitalists have successfully reduced the standard of living for large sectors of the working class. In addition, sectors of the British ruling class undoubtedly resent Germany’s dominance of the EU.

On the other hand, under Brexit, British capitalists will face a disruption of trade and capital flows after 40 years of integration in the EU.

Boris Johnson has been compared to Donald Trump. Both come from rich, elite backgrounds but pretend to be men of the people, and both are quick to use the dog whistles of flagrant racism and homophobia.

Johnson has proposed a way of cutting taxes for the rich in England, Wales and the six occupied Irish counties by sharply increasing taxes in Scotland. (tinyurl.com/y2twtfom)