Hours before white supremacist Trump launched his viciously racist July 14 twitter attack against four progressive congresswomen of color, one of them — Rashida Tlaib — was in Philadelphia meeting with Palestinian activists and supporters. Tlaib became U.S. representative for Michigan’s 13th district this year. 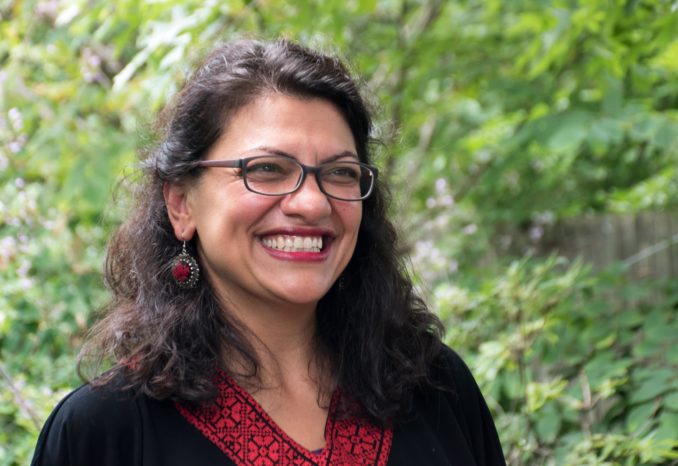 Tlaib, a Palestinian American and a Muslim, was introduced to the gathering by Palestinian author and activist Susan Abulhawa, who urged those present to contribute generously to ensure Tlaib’s 2021 reelection campaign.

Tlaib stressed that by sticking together activists can make history against the dangerous corporate assault on working families: “I know that my sisters in Congress and I are being attacked by this president because we are anti-war and anti-poverty. I’m fighting for a free Palestine, and I will never waiver or sell out to corporate PAC [political action campaign] money.

“We don’t need kids in cages at the border or mass incarceration across the U.S.  We don’t need border walls or dirty water. As Palestinians, we know what that feels like. My folks in Wayne County don’t have clean water — just like residents of Palestine. I want Palestinians to be fighting for my district as well.

“They will try to label me that I care more about Palestine than the residents of my district, but I don’t see the difference between trying to free Palestinians and trying to free my Detroit and Wayne County residents from oppression.” Tlaib’s district, which includes half of Detroit and several of its western suburbs, is the third poorest congressional district in the U.S.

Tlaib made history in 2008 by becoming the first Muslim woman to ever serve in the Michigan Legislature. During a 2016 Trump presidential campaign stop at Detroit’s Cobo Hall, Tlaib and 12 other women disrupted Trump and called him out for his hate-filled rhetoric and tactics.

Tlaib says she hasn’t changed since then: “I’m a U.S. Congresswoman now, and I’m going to call him out!”