Supporters filled the first floor of the People’s Forum in Manhattan on July 19 to welcome Janet and Janine Africa, two members of the MOVE Organization who were released from prison this summer after nearly 40 years behind bars. The two shared harrowing accounts of their decades as political prisoners as well as strategies for resisting the racist, sexist capitalist system, and praised the spirit of MOVE Organization founder John Africa. 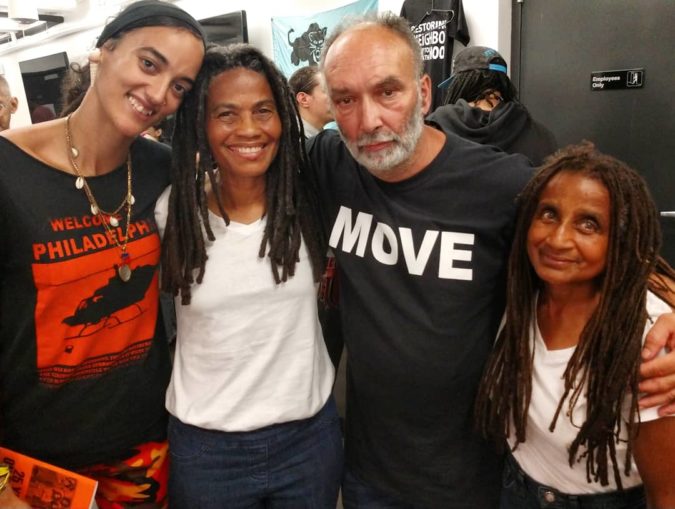 Janet and Janine were joined on stage by Carlos Africa (center right) and Kaila Bulé (left) who performed an original song in tribute to revolutionaries and political prisoners.

The city of Philadelphia and its murderous, white-supremacist police department arrested Janet, Janine and seven other revolutionary Black environmentalists, who became known as the MOVE 9, for the murder of a cop in August of 1978. But everyone involved, including the police, prison authorities and the press, knew that this was a frame-up meant to get the Black radicals off the street, just as the cops had done to the Black Panthers in Philadelphia less than a decade earlier.

Describing the notorious attack on their home in Powelton Village in 1978, Janet said, “Five hundred cops and firemen lined up outside our house at 3 a.m. They put a deluge hose on us, so high pressure that the basement flooded. Our children had to stand on our heads and shoulders not to drown.”

So thick was the tear gas the cops pumped into the residential home in West Philly, Janine said, “I couldn’t see the baby I was holding in front of me.”

As they finally escaped the basement, they heard, to their horror, that police were still shooting tens of thousands of rounds of live ammunition into the house — and laughing. The cops tore children from the women’s arms and arrested them. Delbert Africa, another MOVE 9 member, was brutally beaten by cops, which was captured on film years before the infamous Rodney King beating. Within 24 hours the Powelton Village house was gone, bulldozed by the state to destroy all evidence of the MOVE family’s innocence.

Just as the evening’s program was beginning, organizers received a surprise phone call from one of MOVE’s longest and most faithful supporters: Mumia Abu-Jamal. Calling from SCI Mahanoy, this progressive journalist and former Black Panther has been incarcerated by the Pennsylvania Department of Corrections since 1982 after a similar police frame-up. After Mumia’s call was patched through the venue’s sound system, he was greeted by cheers of support from all those attending. This phone call marked the first time that Janet, Janine and Mumia had been able to speak to each other in 41 years.

“My first question,” Mumia asked the two, “is how the hell can you do over 40 years in prison and still look so damn beautiful?”

As the crowd shared a laugh and applause, both Janet and Janine replied in unison, “Long live John Africa!” It is to the spiritual and revolutionary teachings of MOVE’s founders that both credit their unflinching commitment to the struggle. The Philadelphia police assassinated John Africa in 1985 when they bombed the MOVE family house on Osage Avenue, killing 10 MOVE members and children and burning down an entire city block.

It was because of MOVE’s opposition to the system — to environmental destruction and environmental racism, police brutality and exploitation — that the organization became a target of the state.

“The only thing MOVE was guilty of was exposing the system,” Janet said.

Of all the things that have changed in the 40 years that they have carried on the fight behind bars, the technology is what is most different. Janine explained that smartphones and the Internet are tools of the system to divert people. She stressed the importance of using technology and wielding it effectively for the struggle, but also about the need to teach youth that “You don’t have to be a slave to technology; you don’t have to let it become your heart and soul.”

Janet and Janine were joined by MOVE member Carlos Africa, who told gripping accounts of his prison time, fighting from the inside to defend the women of MOVE who were held in a separate facility. He stressed that MOVE has always been an organization lead by women, and that he was grateful to be exposed to their leadership and an ideology of gender equality in his youth.

Organizer and longtime MOVE ally Orie Lumumba closed the program with a call to action. Two of the MOVE 9, Delbert and Chuck Africa, are still behind bars. Michael, Debbie and Eddie were also recently released. Phil and Merle Africa were killed by prison conditions during their incarceration.

With Chuck and Delbert’s parole board hearings approaching at the end of the summer, supporters are urged to get involved in the effort to free these revolutionaries by writing letters, making phone calls to the parole authorities and visiting onamove.org.