The United Auto Workers has begun negotiations for new contracts with Ford, General Motors and Fiat Chrysler Automobiles. Current contracts expire in mid-September. For the first time in decades, UAW International President Gary Jones has raised the specter of a strike.

Jones informed GM CEO Mary Barra and company negotiators on July 16:  “My Brothers and Sisters are ready to do whatever is necessary to get the contract that, in this time of record profits, they deserve.” A similar message was presented to Ford and FCA. 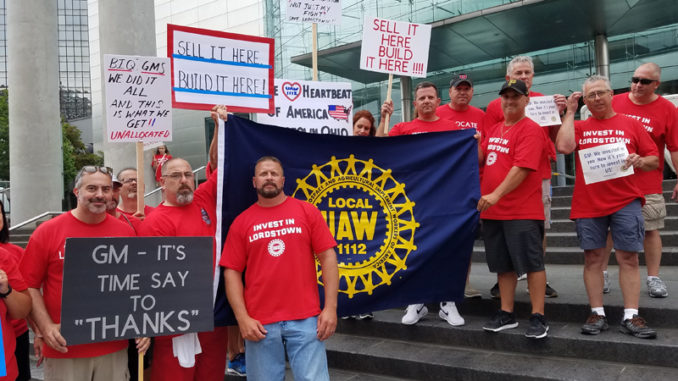 The UAW regional offices are hosting strike-preparedness classes for local leaders and interested rank-and-file members. Union dues have been increased to bolster the strike fund, and weekly strike pay was increased this year from $200 to $250. Industry analysts in the corporate media are nervously reporting “a wide divide” between the two sides. (Detroit News, July 15)

Workers on the plant floor have been hesitant to take the International’s tough talk seriously. For decades the International bureaucracy has asked them to vote “yes” on contracts, claiming big gains when they were, in fact, taking major concessions.

The 2007-11 contracts introduced the two-tier pay scale that paid future hires less than higher-seniority “traditional” workers doing the same work. This unequal and divisive formula — an affront to basic union principles — was expanded when contracts were modified during the 2009 GM and Chrysler (now FCA) bankruptcies and maintained in the 2011-15 contracts.

FCA workers voted down a contract in 2015 that would have extended the two-tier wage scale another four years. They approved a second contract that brought newer, “in-progression” workers’ pay up to that of traditional workers after eight years. Similar language was included in GM and Ford contracts. Workers hired after October 2007 at FCA are still excluded from traditional pension plans and have unequal health benefits.

When UAW members approved contracts in 2015, most believed they were voting to eliminate tiered pay. But new language actually expanded a third tier of lower-paid “temporary employees.” They get no bonuses or benefits beyond a very basic health care plan.

With few protections against arbitrary discipline and discharge, temps are subjected to widespread abuse by supervisors, including racist and sexist harassment. Their work schedules vary from one or two days a week to seven, with little advance notice, and they are expected to cover for high absenteeism on days of bitter cold or oppressive summer heat.

Jones has taken Barra to task over GM’s plans to permanently close plants in Michigan, Ohio and Maryland. The Lordstown, Ohio, assembly plant has been idle since March, and three others are slated for closing. The current contract prohibits GM from closing or idling plants. The company has tried to get around the contract by calling the plants “unallocated” — meaning no new work after the current car model being built is discontinued.

The UAW has mainly limited the fight against plant closings to filing grievances, taking legal action and holding prayer vigils. It has not lent support to GM workers in Oshawa, Ontario, Canada whose plant is also on the chopping block. Several busloads of GM workers from Maryland and Lordstown demonstrated with local autoworkers outside GM world headquarters in downtown Detroit July 16, the day negotiations opened.

The closing of Lordstown is a big blow to the Youngstown-Warren area, which has been devastated by multiple steel mill closings. In a sign of hard times, Youngstown’s only daily newspaper, The Vindicator, will cease publication in August.

Meanwhile, FCA is going forward with closing Mt. Elliott Tool and Die in Detroit, which will eliminate more skilled-trades jobs. Workers have also been laid off in a number of FCA and Ford plants.

Several decades of capitalist restructuring have reduced UAW membership at the Detroit Three to 155,000, even as car sales have rebounded to pre-recession levels. A recession in auto would bring even more layoffs.

The companies are quick to point out that their average labor costs are higher than those of Asian and European vehicle manufacturers with plants in the U.S. They want the UAW to partner with them in holding costs down in order to be competitive. GM CEO Barra warned President Jones that “our collective future is at stake.” (Detroit News, July 16)

The UAW should reject these bogus arguments. Labor costs are estimated to be only 5 percent of the cost of a car. Put another way, only 5 percent of sales revenue goes to the workers. This comes to a little over $20 billion for the three companies combined, not much more than their combined profits of about $16 billion in 2018. On the average, four hours of labor go to profits for every five hours that go to wages and benefits. This is a high rate of exploitation, and it is much higher in low-wage countries. Unions have every right to say no to concessions.

Demands around equal pay and job security are more than just, but it may take a strike to get the companies to agree. It is past time for the UAW leadership to kick its decades-old habit of class collaboration, the root of an embarrassing bribe-taking scandal still under federal investigation.

The traditional “pattern bargaining” strategy has been to name one of the three companies as a “strike target” from which the union will try to get the best possible contract, hypothetically by striking if necessary, and then to push the other two companies to follow the “pattern.” The last auto strikes, in 2007, were for two days at GM and six hours at Chrysler. Some workers mocked them as “Hollywood strikes” — just for show. What they “won” was introduction of two tier, no raises for four years and the erosion of skilled trades through consolidation.

Given the hard line the Detroit Three bosses are taking, a better strategy might be to strike all three and demand no plant closings, no mass layoffs, no more tiered pay and all temps must be made permanent employees.

Grevatt is a UAW worker who recently retired from FCA after 31 years. She is the Trustee of UAW Local 869 and an elected delegate to the union’s recent convention.