Many thousands of people with disabilities and our allies endured oppressive heat July 14 to march, roll, ride and scoot in the streets of New York City for the fifth annual parade to commemorate the signing of the Americans with Disabilities Act (ADA) 29 years ago.

Italian-American immigrant and wheelchair user Nadina LaSpina, a Grand Marshall of the parade, pointed out that it was being held on Bastille Day — the day the French workers tore down the jail walls. The veteran disability rights activist and writer’s remarks caught the spirit of the parade: “Let’s break down the walls — no walls — neither to keep people out nor to keep people in. And no locking up people in nursing homes or in detention centers.”

LaSpina asserted that people with disabilities are proud “in spite of the fear of ending up in a nursing home or other institution. So many of our people are still stuck in those hellholes. Free our people! Pass the Disability Integration Act. If we are happy to live our lives, it’s in spite of all those who think that disabled lives are so sad that they are not worth living. … Don’t get all teary-eyed and tell us how brave we are. Join our fight! We don’t need sympathy, but we could use allies.”

Many disabled peoples’ organizations and their allies participated, including the Screen Actors Guild‐American Federation of Television and Radio Artists, Communications Workers (CWA) Local 1180 and the New York State Nurses Association.

In New York, Gov. Cuomo has been cutting back services and consolidating them, eliminating many benefits and options for disabled people. Although the fight for elevators and ramps to give disabled people equal access to the subway system had been gaining momentum, with victories in the courts, Cuomo recently proposed a subway reorganization plan that cuts transit jobs and does not include any additional access in the public transit system.

Cuomo replaced the Independent Care System with the Visiting Nurses Service, which lacks ICS’s personalized comprehensive care for disabled people and reduces the amount and variety of their health and home care benefits. At the 2018 parade a protest against Cuomo by 50 wheelchair users, who gathered in front of the stage, warned that this could happen.

These attacks are also happening as police repression continues unabated, including the harassment of mostly young people of color in clampdowns on so-called “fare beaters” in the subways. A leaflet produced by the People’s Power Assemblies, whose members were marching in their fifth consecutive NYC Disability Pride Parade, pointed out: “Over 50% of people killed by police have a disability, and the police continue to disable and kill Black and Brown people with impunity — like paraplegic Jeremy McDole, people with medical disabilities like Eric Garner, or Magdiel Sanchez who was deaf.”

Workers World Party, Peoples MTA, and Rise and Resist also marched, after participating in a demonstration at a nearby subway station where there was no elevator; 80 percent of stations in the city are not accessible. Rise and Resist carried a cardboard cutout of Cuomo cutting a ribbon at the opening of a new bridge, which he was happy to build while refusing to build elevators for inaccessible stations.

The parade passed a judge’s stand where participants were judged for their creativity in costumes and floats, demonstrating spirit and having fun. Prizes were announced at a festival following the parade, which also showcased musical and dramatic abilities of participants. 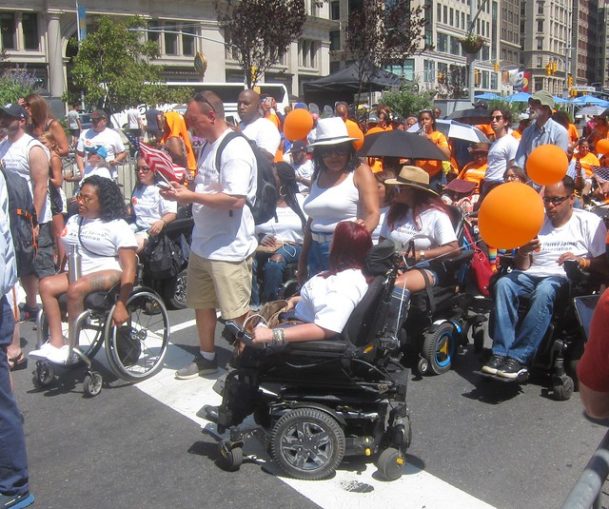 The meaning of disability pride

LaSpina explained the meaning of disability pride to the crowd: “They say to me, oh, yes, you should be proud because in spite of your disability you’re so positive. You can have a smile on your face in spite of your unfortunate situation of the bad hand you’ve been dealt in life, of your sad plight.

She ended her remarks: “We all have the same kind of body. It’s made of flesh and blood and organs that fail. You never know when it’s going to happen. Ours is a minority anybody can join. And most of us, if we live long enough, will experience disability. But if our bodies or our brains do not work the same as other people’s that does not make us less valuable as human beings.

“Today we are all out. We won’t be hidden away. We are parading our disabled bodies and saying, ‘We are proud.’ And we are going to enjoy ourselves today. We’re going to have a good time. You know, so many people still insist on believing our lives are sad and pitiful, so we must make sure we do not internalize any of that negativity. So it is important for us to enjoy as much as we can. Having fun is a political act. It’s a revolutionary act. So let’s have fun.”

The WWP Disabilities Bureau joined LaSpina after the parade at Barnes & Noble for an exciting book-signing event for her new book, “Such a Pretty Girl: A Story of Struggle, Empowerment, and Disability Pride.”

The back cover of the book describes the author: “LaSpina is a prominent activist in the disability rights movement and has been arrested countless times for civil disobedience. You can find her in the streets with Disabled in Action, ADAPT, the Disability Caucus, and others.”