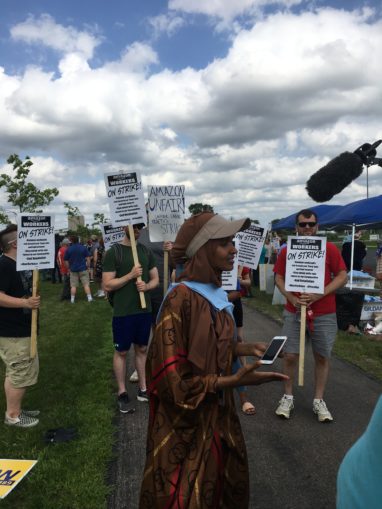 With the support of the general community and union locals, hundreds of people picketed the entrance of the Amazon fulfillment center, holding signs, singing, chanting and dancing. Workers report that almost all trucks that approached the facility turned around and refused to cross the picket line.

One hundred workers were originally expected to walk out and a significant number did. With the front door flanked by jeering managers, “loss prevention” staff and police, the company succeeded in intimidating some workers into remaining on the job.

Worker demands include: no retaliation for concerted action, better working conditions, an end to unsafe work that leaves workers injured, and for Amazon to stop polluting the environment.

East African workers in particular, many of whom are Muslim, demand adequate time and accommodation for religious practices throughout the day. Amazon’s designated space for prayers is no more than the doorway of a corridor. According to Jaylani Hussein of CAIR-MN (Council on American-Islamic Relations-Minnesota), this is less than what some smaller companies provide for only 50 employees.

Speaking at the rally, former employee Meg Bradley told her story of developing a foot injury — for which workers’ compensation was denied — which later became exacerbated, rendering her unable to work. She insists Amazon must “reduce productivity rates” and exploitative reliance on temporary workers to stop the “churn and burn” of workers.

Bradley recalled the history of her grandfather, who, many decades ago, also worked in a factory and struck for workers’ rights. “I think he’s looking down on me today, and I think he’s quite proud of what’s going on.”

Weston Fribley, a tech engineer from Seattle and member of Amazon Employees for Climate Justice, read solidarity statements from others in his division. “Without its employees, Amazon cannot exist,” Weston said. “We have no say on how our work contributes to climate change, or otherwise affects our world. … Will Amazon squander its resources on new ways to extract even more work from its overworked employees?”

Weston’s sentiments were joined by Michael Russo, a pilot whose company flies air freight for Amazon and a strike-preparation chair with Teamsters Local 1224.

Phyllis Ibrahim, a young Somali worker, emphasized the big picture of the workers’ concerns. She related that a lot of the workers at MSP1 are Somali, and much of the climate change caused by companies such as Amazon has effects around the world, including in Somalia. “A lot of money is stolen from the workers in here … all of that comes at a cost,” said Ibrahim.

An elderly Somali warehouse worker who walks with a cane, Mohammed Hassan, spoke through a translator. He lambasted Amazon for their unfair standards and practices: “There is a lot of fear, a lot of injustice around here. The work is a heavy load. They think that human beings can be robots. We are not scared to stand up for our rights. … We will make sure that … we speak for all the Amazon workers in the world, [and] all the humans of the world.”

Working at an Amazon fulfillment center requires learning a dizzying amount of terminology. K-saws, R-saws, “water spiders” and other such new words are all part of the cutting edge in sorting merchandise that arrives on someone’s doorstep in two days. Many workers believe that Amazon is listening in on their conversations and using “machine learning” algorithms to preempt the thoughts of workers.

Amazon has reached the top of capitalist accumulation, not only at the cost to taxpayers through billions in government contracts and tax exemptions, but especially through the toil of its workforce. Workers are monitored for productivity at all times on their shifts, which has engendered a culture of camaraderie among them. Amazon employees told Workers World that it is not uncommon for them to give easier tasks to workers who are momentarily struggling so that the work group is not punished for lagging productivity.

One benefit that workers are grateful for at Amazon is their quarterly allotment of unpaid time off (UTO), which permits them to deviate from a set work schedule to a limited extent. A parent might be able to attend their child’s soccer game by taking UTO. But workers are fully aware that the bosses who came up with this benefit can take it away. A complaint was filed with the National Labor Relations Board when workers who previously walked off the job had their UTO reduced. 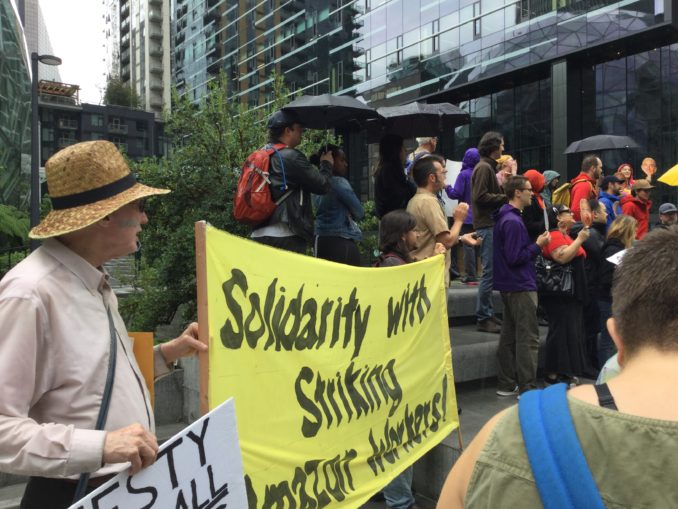 Kim Hatfield, a divorced mother who came from Dallas in solidarity, spoke with Workers World. The struggles of East African workers at MSP1 resonated with her experience at Amazon, where she empathized deeply with Liberian workers performing back-breaking labor alongside her.  Hatfield worked for Amazon for less than a year before being injured to the point where she couldn’t work.

Performing as a “picker,” Hatfield developed severe pain in her arms that grew more intense as time went on. While seeking care through the company’s approved network of workers’ compensation physicians, she was relieved when she was approved for surgery. However, she was devastated when the insurance adjustor informed her that a review determined that her approval had been reversed.

The adjustor’s call came two days before her son’s 16th birthday. Hatfield had planned to surprise her son with his first car, but the call cut her plans short.

After performing her own investigation into the adjustor’s decision, Hatfield discovered conspicuous additions to and subtractions from her medical record. In particular, snapshots of the record show a surgical history of carpal tunnel surgery. Hatfield asserts that the company inserted a fictitious precondition to justify denying her treatment.

Hatfield added that she and her co-workers observed that treatment denials appear to happen, quite conspicuously, more to women employees, whereas many men who receive injuries get the treatment and accommodation they need.

Hatfield is currently working with an attorney to appeal the rejection of her compensation claim.

Solidarity actions here and around the world

In Germany, nearly 2,000 workers in seven cities held strikes on July 15 in solidarity with MSP1 workers and Amazon workers around the world. In Spain, workers had planned to hold a two-day demonstration, but it was later cancelled because there are signs that the company may come to an agreement subsequent to a judicial decision in the coming months.

In England, workers at the Rugeley facility held a demonstration, echoing the rallying cry from MSP1 workers: that workers “are people — not robots.” 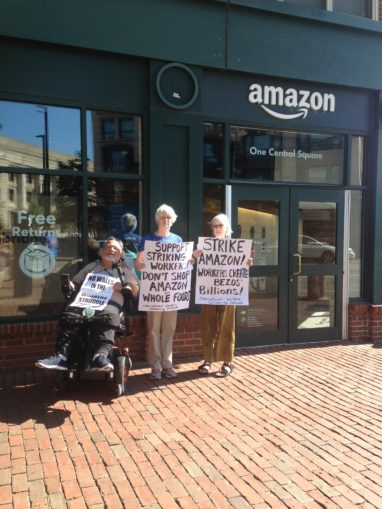 An Amazon worker at the rally told Workers World that plants have no air conditioning and managers are imposing impossibly fast speedups. “Amazon workers appreciate the support and community unity against the sweatshop conditions we are working in. More people are starting to see how Bezos, the richest man in the U.S. who doesn’t pay taxes, is treating Amazon workers.” 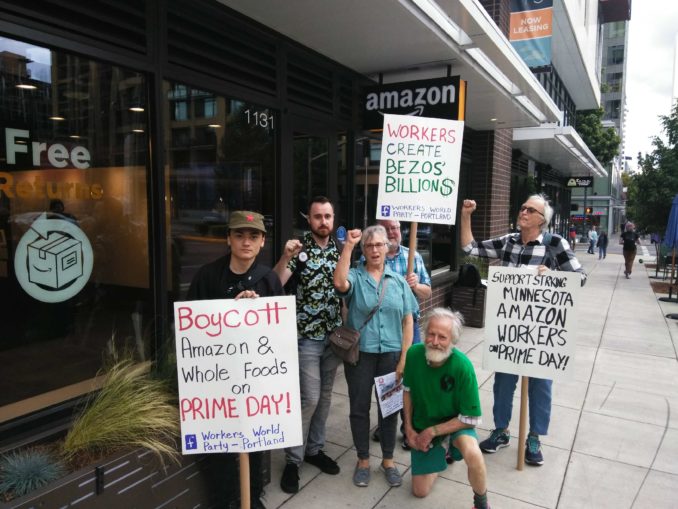 Paige Kreisman, a transwoman running for the Oregon House of Representatives, said at the rally, “I choose to stand with the workers. …  We can’t build a movement without labor.” A member of Vets for Peace, Paige was kicked out of the U.S. Army for being trans. Other speakers represented the Amazon Workers Solidarity Campaign, International Longshore & Warehouse Union, Service Employees union, Communication Workers and Jobs with Justice.

The International Workers Solidarity Network initiated an online solidarity campaign that encouraged workers to support the Amazon strike by pledging solidarity and spreading the word about the strike; joining actions planned to support the workers’ demands or organizing their own at an Amazon or Whole Foods location; and boycotting Amazon and Whole Foods on Prime Day to respect the workers’ picket line.

The solidarity pledge raised the significance of this action, led primarily by Somali and East African migrants, following strikes by Uber and Lyft drivers and Wayfair workers, and in the midst of Trump’s racist war on migrant workers. Nearly 1,000 people signed the pledge from across the U.S. and around the world; others shared the message of the strike through social media and other means.