The Western New York SPoT Coffee chain has become the center of a pro-union protest now in its second week. 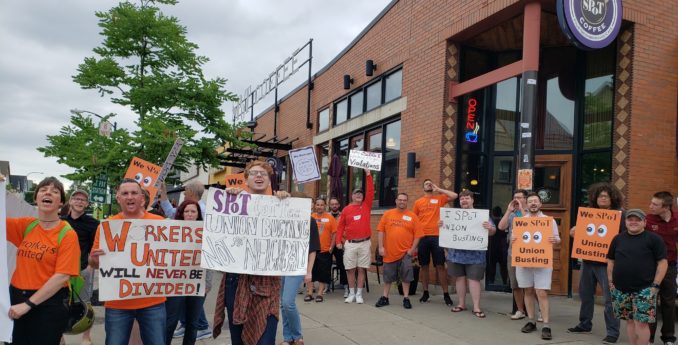 Following the successful unionization of its Rochester location in May, SPoT fired Phoenix Cerny and Phil Kneitinger for attempting to bring the union to Buffalo shops. The company also fired store manager Lukas Weinstein for standing in solidarity with his co-workers and refusing to give the names of those attending union meetings. The company has given no other pretext for terminations.

The workers’ reaction has been swift. Picket lines at SPoT locations around Buffalo were set up by SPoT employees and the organization Workers United, which now represents the Rochester shop. Their first demonstration, on July 4, was attended by around 50 picketers, including friends, co-workers, union activists and other comrades in the class struggle. The demonstration was met with near-constant enthusiasm from motorists and passersby, and the momentum carried to pickets at other SPoT locations in the city.

“We’re here to tell our community what had happened, and that it was wrong,” said Cerny at the third picket, “and that we are going to continue to fight for our right to organize.” In addition to getting information out, Cerny added that the workers were “collecting signatures for a petition and contact information in the event that [they] decide to push forward with a boycott with support from the community.”