As we go to press, the House of Representatives passed a resolution saying that Trump’s tweets were racist. All Democrats and four Republicans voted for the resolution. More to come.

The white supremacist and misogynist Trump has opened up another vicious, racist verbal war.  This time it is against four progressive Congresswomen of color — Reps. Alexandria Ocasio-Cortez (N.Y.), Ilhan Omar (Minn.), Ayanna Pressley (Mass.) and Rashida Tlaib (Mich.). They are, respectively, Puerto Rican, Somali, African American and Palestinian. Omar and Tlaib are also Muslim. All four are Democratic Party members. 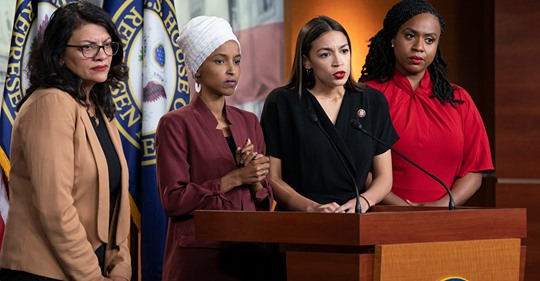 The four have been aggressively outspoken against the Trump administration’s xenophobic raids, deportations and detention of thousands of migrants, including children, since they won their congressional seats in 2018.

They have especially ratcheted up their criticisms of Trump following public visits of several politicians to extremely overcrowded detention centers where migrants have been denied the right to shower, nourishing and plentiful food, medical care and much more.

Trump told the women in his tweets to “go back and help fix the totally broken and crime infested places from which they came.  If they are not happy here, they can leave.” Ironically, Omar is the only one born outside the U.S.

At a joint July 15 press conference, all four representatives responded to Trump’s attacks.  Rep. Omar stated, “This is the agenda of white nationalists. This is his plan to pit us against one another.”  She also connected Trump’s attacks on them to his attacks on Black athletes who have denounced social injustice, his objectification of women and his disparaging remarks about developing countries.

A week prior to Trump’s attacks, the Speaker of the House of Representatives, Nancy Pelosi (D-Calif.), opened up an attack of her own on the same four representatives.  The attack was in response to their opposition to a $4.6 billion House-sponsored border bill that Democrats were pushing in an attempt to appease Trump, who was threatening to shut down the federal government for a second time if building his new border wall was stalled again.

In a New York Times interview, Pelosi remarked about the four: “All these people have their public whatever and their Twitter world.  But they didn’t have any following. They’re four people and that’s how many votes they got.” (July 6)

In truth these four “no” votes represented the sentiment of millions of people, who are adamantly opposed to building any new wall or any milder-sounding but still-restrictive immigration policy.

Rep. Tlaib said in an ABC News interview, “We know what it feels like to be dehumanized. We know what it feels like to be brown and black in this country. And I’ll tell you right now, we’re not going to stand by and sit idly by and allow brown and dark-skinned children to be ripped away from their parents to be dehumanized.” (July 7) She also stated in the same interview, “It is very disappointing that the speaker would ever try to diminish our voices in so many ways.”

These four representatives must be defended against racist and sexist attacks, whether coming from the Trump administration or from within their own Democratic Party.  No matter the varying degrees of rhetoric or tone of the political attacks, the Republican and Democratic parties represent the interests of big business. The fact that these four women are not afraid to speak out against injustice against Black and Brown people — like the chokehold death of Eric Garner, whose killer cop was exonerated July 16; or the reportedly 24 migrants who have died in Immigration and Customs Enforcement custody, including seven children — has helped empower many women of color, other working women and workers in general to cheer them on and to be in the streets to protest these inhumane policies.