Pressure is growing on Philadelphia and Pennsylvania officials to find a way to prevent hedge fund owners from shutting down Hahnemann Hospital. At the same time, hospital managers are moving to close down functioning units quickly, before a mass movement can develop. Hahnemann’s lawyers claimed in bankruptcy court in Wilmington, Del., that the hospital is losing money rapidly, and this makes it harder to sell the parent company’s most valuable asset, St. Christopher’s Hospital for Children, near the Kensington section of Philadelphia. 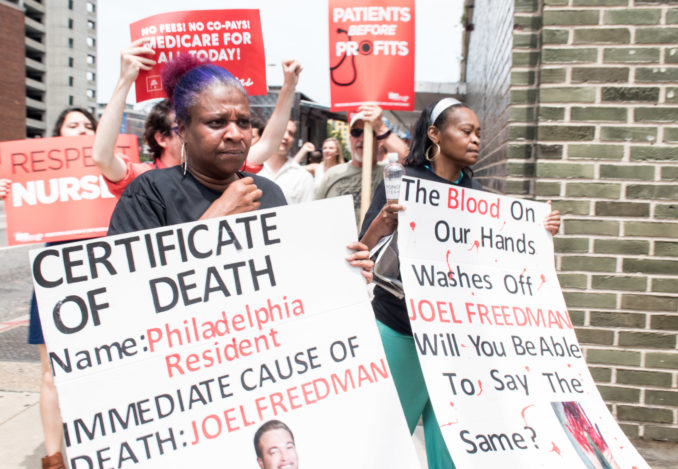 July 11 protest to save Hahnemann Hospital brought out unions, community

Services being shut down

In a July 3 order, Philadelphia Common Pleas Court Judge Nina W. Padilla wrote that Hahnemann is “enjoined from closing, ceasing operations, or in any way further reducing or disrupting services at the Emergency Department of Hahnemann University Hospital” before a closure plan is approved by the city’s health commissioner and a bankruptcy judge.

Nevertheless, hospital officials plan to completely shut down Hahnemann’s emergency room July 17. Most Hahnemann admissions come through its emergency department, so shutting the ER would rapidly reduce its patient population to nothing. The emergency department has already stopped accepting critically ill patients, and it gave up its trauma center designation just days after the closing was announced.

A large proportion of Hahnemann patients are Black and Brown, many on either Medicare or Medicaid, the government health plan for the poor.

Its maternity ward was closed July 11. Without Hahnemann, Philadelphia will have just five hospital maternity units, plus a special delivery center for high-risk pregnancies at Children’s Hospital of Philadelphia. That is down from 14 maternity wards in 1997.

The closure “does concern us from the standpoint of trying to reduce maternal mortality,” said Marianne Fray, the Maternity Care Coalition’s chief executive officer. “The more barriers to care, the more it increases the possibility that they’ll have adverse outcomes.” (Philadelphia Inquirer, July 9)

Hahnemann announced plans July 10 to transfer its physician training programs to Tower Health, which will pay $7.5 million for Hahnemann’s 500-plus residency and fellowship slots. Residents will be guaranteed a spot at one of Tower’s six hospitals, the largest of which is the 716-bed Reading Hospital in Berks County. But the Tower system has accredited residency programs in only five of the 15 medical specialties available at Hahnemann.

Hahnemann’s policies, if allowed to continue, will certainly empty the 170-year-old, 496-bed institution within days or weeks.

Sodexo Inc., which provides food services at Hahnemann, notified the state that it plans to lay off 106 workers when the hospital closes. Many more workers who provide services to the hospital also stand to lose their jobs.

If city and state officials fail to come to an agreement with Hahnemann’s owners or the bankruptcy court to keep the hospital open, union and community organizers will be forced to come up with a Plan B.

So far, state and city officials have been unable to come up with a fiscal alternative to CEO Joel Freedman and his hedge fund backers, Apollo Global Management and Colliers International.

Hahnemann Hospital’s demise is being orchestrated by those hedge funds determined to make millions in profits by turning the medical properties into commercial or residential entities. It’s another layer of the gentrification that has forced out longtime residents from large sections of the city’s many neighborhoods.

Many organizations, large and small, have developed over the last decade trying to fight gentrification. Anyone who has seen their neighborhood gentrified should come out into the streets to stop the equally destructive gentrification of Hahnemann.

Hahnemann’s closing is an issue for all women. Shutting down the maternity ward in the city’s first hospital to give women a medical degree will increase deaths during childbirth, especially for the Black, Brown and impoverished women who depend on Hahnemann.

Historically, many LGBTQ2S+ people have faced obstacles in receiving adequate care. In a 2010 survey conducted by Lambda Legal, almost 56 percent of lesbian, gay or bisexual respondents had one or more discriminatory care experiences, and 70 percent of transgender and gender-nonconforming respondents had one or more of them. Hahnemann University Hospital’s Transgender Fellowship Training Program, a rare program focused on medical and surgical care for transgender patients, was among the first of its kind in the United States.

Hahnemann is an example of why “Medicare for All” is needed. Closing Hahnemann, a safety net hospital that provides medical care to an already underserved community, will make it even harder for those with minimum or no insurance to gain access to health care.

Workers represented by the Pennsylvania Association of Staff Nurses and Allied Professionals (PASNAP) and District 1199C of the National Union of Hospital and Health Care Employees and community activists will need to turn up the heat if Hahnemann is going to survive.

Individual members of the Communications Workers; American Federation of State, County and Municipal Employees; American Federation of Teachers; Service Employees; Teamsters; and other unions have taken part in Save Hahnemann rallies. A massive turnout of the labor movement on a weekend, or better yet on a work day, would show the powers that be that organized and unorganized workers are united to defend over 3,000 Hahnemann workers and the additional hundreds of workers who service the hospital.

If all the diverse communities who have ever benefited from Hahnemann Hospital shut down Broad Street and occupied the hospital grounds, wouldn’t local, state and federal officials find the necessary funds?