About 1,700 workers, represented by Electrical Workers (UE) Locals 506 and 618, ratified a four-year contract with Wabtec (Westinghouse Airbrake Technologies) in Erie, Pa., on June 12. After a historic nine-day strike in March (WW, March 6 and 15), UE continued to rally solidarity in Erie and Pittsburgh communities while negotiating the agreement the membership approved.

When Wabtec took control of the GE Transportation division in February, it refused to honor 70-years of bargaining history with UE. The company stopped offering a pension and retiree health care to the highly skilled workforce and demanded mandatory overtime, including that 20 percent of the workforce be non-union temps and starting wages be $16.75 for a permanent second tier with an 18-year progression before those workers could reach parity with current workers.

When the company threatened to move the work out of Erie if UE refused a two-tier workforce, UE threatened another strike. The workers won a modified victory: They agreed to a two-tier wage structure over 10 years before parity, with starting pay at $20.47. (Existing workers in the lowest job classification currently earn $31.49.) Not only does the agreement keep existing jobs, but Wabtec guarantees 100 new positions by the end of the contract. It also agreed to give preferential treatment (but at lower pay scale) to 460 previously laid-off GE workers when jobs open up.

“The 10-year progression is not something that people wanted to happen, but the company would not let that go,” UE General President Peter Knowlton told Labor Notes. (June 30) If the union had called another strike, he believes it would have been “self-defeating” with the loss of community support.

“We’ve managed to preserve a lot of what we had,” asserted UE Local 506 President Scott Slawson, “Not only did UE maintain the right to strike based on transfer, subcontracting resulting in permanent layoffs, or the company’s failure to resolve grievances in a timely manner,” but “there’s relief in the community.” 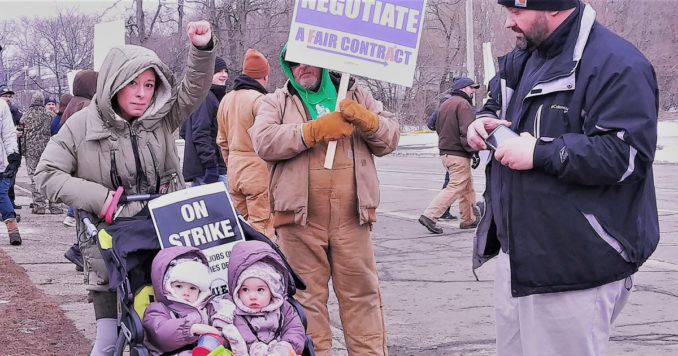 After auto parts company Faurecia and the United Auto Workers failed to reach a new contract by midnight June 21, 1,900 workers went on strike in Saline, Mich.

Represented by UAW Local 892, the workers build instrument panels, center consoles and interior parts for Fiat, Ford, Chrysler and Lincoln vehicles; those plants depend on Faurecia parts. After Local 892 posted the strike on Facebook, UAW talks with company bigwigs in the Paris suburbs extended into the early hours of the morning. The strike ended nine hours later when the two sides reached a tentative agreement.

Less than a week later, the membership passed the four-year contract by 83 percent. The contract will raise pay each year and create a job for a union health and safety representative. (UAW.org, July 2) When management resists paying union scale wages and benefits, workers have to persuade them with the strike weapon!

The crew, now in its sixth season, has struggled for a union since its first season. But the bosses ignored them, though Bojack writers and voice-actors had been unionized from the start. The separate tier made the workers feel the bosses valued some talents over others. After Shadowmachine refused to acknowledge that 75 percent of the crew had signed cards for representation by TAG-IATSE, the crew staged a 10-minute walkout on Friday, March 29. Studio owners began negotiations the following Monday.