The United States government is waging a white-supremacist, imperialist, neocolonial war on multiple fronts. While this war on oppressed people rages on, people across the country and the world are taking a stand against state violence. Violence abroad can take many forms like resource extraction, economic sanctions and regime change. 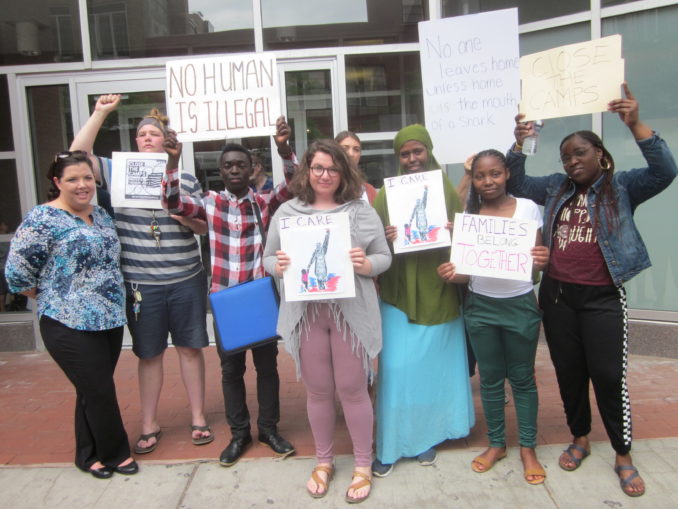 Over a hundred people gathered in Syracuse, N.Y., on July 2 to demand “Close the Camps.”

These forms, including intensifying climate catastrophe, are forcing folks to flee their homeland from all over the planet and move toward increasingly militarized borders. Migration has been happening on this continent for thousands of years before it was colonized.

Militarized borders are an affront to humanity. The drowning deaths of the Salvadoran father, Óscar Alberto Martínez Ramírez, and his 23-month-old daughter, Valeria, attempting to cross the Rio Grande River are tragic examples of these heinous crimes against humanity.  Yet even in the face of this violence we are seeing folks coming together against these atrocities.

A collective consciousness has surged around migrants in detention. While working to see that all oppressed peoples in cages swallowed by mass incarceration are included in this discussion, people are invigorated by those fighting for im/migrants and refugees in this current period. There are reports about abhorrent sanitary conditions and overcrowding as well as reports of sexual abuse and even fatalities due to medical neglect.

All this consciousness raising has led to a promising anger. Last week, a wave of national demonstrations called for closing these camps. Organizers like MoveOn and immigrant rights groups were able to draw outraged people to over 175 protests in 40 states. One demonstration in Elizabeth, N.J., on June 30 had 200 Jewish people blockading an Immigration and Customs Enforcement detention center. This protest was part of a larger Jewish group called Never Again Action. Their demands included defunding ICE and U.S. Customs Border Protection, closing border camps and permanent protections for all undocumented immigrants. This act of solidarity in New Jersey resulted in 37 protesters arrested in support of those oppressed at the border.

Other expressions of solidarity have come from workers and folks abroad. Wayfair workers walked out of the job on June 26 in Boston to protest their CEO’s refusal to stop furnishing detention centers with Wayfair products.

An Arizona teacher, Scott Warren, is facing 10 years in jail if convicted of two felonies for the so-called crime of leaving jugs of water and providing shelter for migrants in the desert.

On June 29, a German ship captain, Carola Rackete, after docking in the Italian island port of Lampedusa, was arrested for rescuing over two dozen Libyan migrants. Matteo Salvini, Deputy Prime Minister of Italy and member of the right-wing League Party, has moved to close off all Italian ports of entry to migrants.

Thirty thousand people came out in Berlin on July 6 to support the efforts of Sea Watch 3. Meanwhile, Rackete has been released from jail but is still held in Italy. 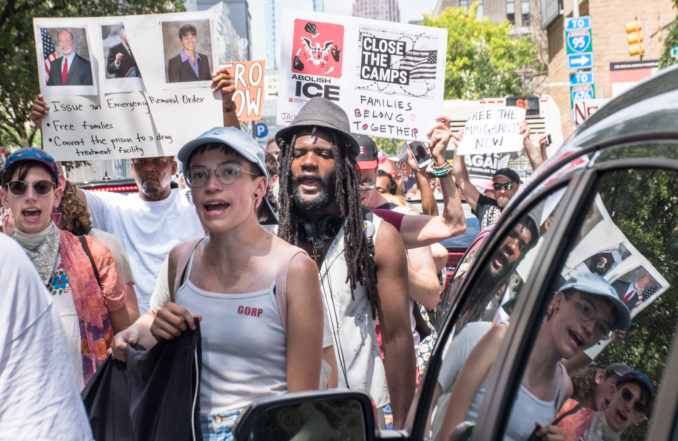 July 4 march in solidarity with migrants

Candidates ill-equipped to challenge the crisis

Along with the public outcry, some so-called “democratic” U.S. institutions have responded to this border migrant crisis. A federal judge responded to a lawsuit regarding facilities in the Texas Rio Grande Valley, which includes a notorious El Paso concentration camp. The judge demanded that health experts be allowed to examine children and investigate the detention centers.

Democratic congressional members and even presidential candidates have been visiting some centers across the country. While there may be some genuine outrage from these representatives, many get the feeling that 2020 candidates in particular are using the trauma of refugee detention for personal and political gain. Presidential candidate “Beto” O’Rourke held a June 29 protest outside a Southwest Key facility near downtown Houston. His team reached out to a couple of local organizers prior to the event and ignored the women of the Carnalismo Brown Berets once the event began.

Conventional institutional interventions seem ill-equipped to face the scale of terror and violence of the border migrant crisis in an expedient manner. In many cases, such institutions only reinforce the violence these colonial borders were devised to inflict in the first place. For example, look at law enforcement agencies.

Racist, sexist arm of the state

Agents of law enforcement, from the federal CBP agency to local and state police officers, have been found to be exchanging actively harmful opinions in Facebook groups. ProPublica reported that nearly 9,500 current and former border patrol agents were sharing a myriad of abhorrent, xenophobic, sexist memes and conversations that often times called for credible threats of violence against migrants and sexual violence against public officials like New York Democratic Rep. Alexandria Ocasio-Cortez.

On June 14, Reveal News reported that hundreds of current and former police officers and sheriffs were sharing racist memes, conspiracy theories and Islamophobia on the same social media platform.

At home and on the border, people in positions of real power face no repercussions for actively producing and spreading hateful material online. The ideas and images expressed on social media no doubt inform the way these agents of state violence interact on their jobs and with people they supposedly serve. Rather than trying to reform these institutions that are rooted in oppression, people must abolish them.

In discussions, folks often raise that for all these hateful law enforcement agents, there are also agents who are good. But community organizer Vienna Rye counters that by asking in their graphic art, “What does it mean to be good at your job, when your job is to enforce racist, sexist, unjust laws?”

Reporter Tanvi Misra pointed out how border militarization evolved hand-in-hand with the rise of military-style policing in segregated U.S. cities. This connection is crucial for our understanding of the repression we’re up against. Divide-and-conquer is a core tactic of colonial and capitalist oppression. So, at the same time, it is important to connect the border migrant crisis to prison abolition, the climate crisis and the anti-war movement. There are no borders in the workers’ struggle. (Citylab.com, Nov. 29, 2018)

One group looking to bridge these struggles is Fight for Im/migrants and Refugees Everywhere, or FIRE, which calls for no more concentration camps, immediate asylum for all refugees, ending mass incarceration and an end to U.S. imperialist intervention abroad.

If you agree with these demands, join FIRE for national demonstrations against war abroad and at home in cities throughout the country the week of July 12-16; Global Strike Against Climate Change at the U.N. in New York City the week of Sept 21-28; and a rally against colonialism in Puerto Rico at the U.N. on Sept. 22. You can find out more at fightformigrants.org.