In protest of the boss’s racism and Islamophobia, 35 to 40 Muslim workers at the Jennie-O turkey processing plant in Melrose, Minn., marched into the parking lot instead of clocking in for their 1 p.m. shift on June 10.

A worker there since 2015 told Workday Minnesota that problems started after the plant moved to a new facility and management changed the policy regarding daily prayers. The company dictated new prayer times rather than the appropriate number and hours for daily prayer mandated by Islam. (June 10) In a letter shared June 11 with the St. Cloud Times, workers raised how when they met with management, the manager “took off his shirt and threw it at the workers, threatened discipline and asked them to leave the plant.”

For now the workers’ heroic action is winning coverage, and they rightly believe the law is on their side: Changes to prayer time violate Title VII of the 1964 Civil Rights Act, which guarantees the right to religious accommodations in a nonhostile work environment. 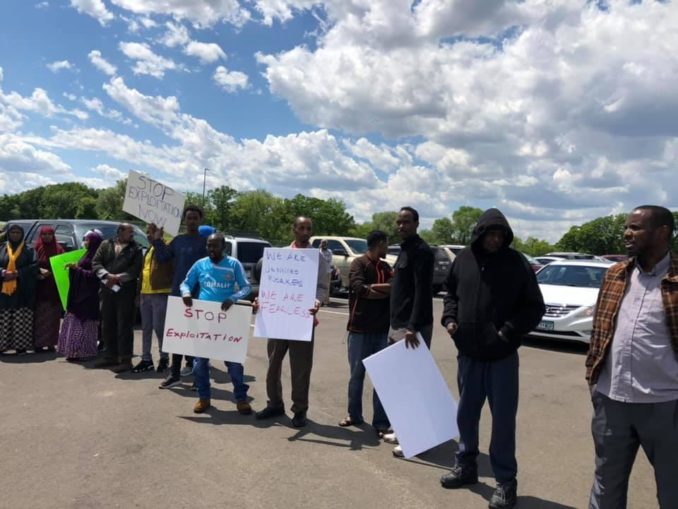 Mexican farmworkers, working through the H-2A-visa guestworker program at King Fuji farm in Mattawa, Wash., went on strike June 13 to protest abusive conditions and retaliation. (The Stand, June 13) The Public News service reports the bosses were intimidating the workers if they didn’t meet what the workers knew were unrealistic production quotas. (June 13)

The workers are being represented by the Indigenous-led farmworker union Familias Unidas por la Justicia, affiliated with the state’s AFL-CIO labor council. According to reports, management is constantly threatening workers with deportation or blacklisting.

A June 18 entry on the Community 2 Community Facebook page noted the workers were back in the field with “verbal commitments from the company that there will be no blacklisting or retaliations. We have that win but there is no signed paper for the demands of the workers.” Familias Unidas por la Justicia encourages supporters to call 509-628-1619 or email [email protected] and demand that King Fuji sign a legally binding agreement.

Chanting “Federal lives matter,” members of Locals 1136, 3354, 2192 and 96 of the American Federation of Government Employees rallied outside the St. Louis Federal Center on June 6 demanding to be moved because tests, as far back as 2016, show the complex contained 83 hazardous substances. Federal officials knew years ago about that, but did not correct the situation or inform the 2,400 workers at the Social Security Administration, Agriculture Department, General Services Administration and Veterans Affairs. AFGE is calling for their “immediate transfer.”

“This is my career that I love doing,” said Darryl Leatherberry, a Marine veteran with the VA for 13 years. “But I should be able to do it in a safe environment.” AFGE is calling for immediate testing of all current and past employees for all contaminates, as well as a congressional investigation into whistleblower retaliation.

Asbestos and lead have been removed, and the GSA insists the building is now “within guidelines.” But Local 2192 President Will Grant asserts people would never buy a house with “acceptable levels of contamination.” He noted many cases of cancer, respiratory issues and loss of taste and smell. (Labor Tribune, June 17) Workers’ health and safety is a human right!

A new group of women workers have joined the #MeToo Movement — long-distance truck drivers. The Des Moines Register reported June 5 that 300 drivers filed a class-action lawsuit against CRST (Cedar Rapids Steel Transport), alleging that not only were drivers sexually harassed and assaulted, but others were raped. If the women protested, they were sidelined or forced off the job.

The irony is that the drivers often transport Fortune 500 brands that are marketed mostly to women, such as the Gap, Kohl’s, Hobby Lobby, Macy’s, JCPenney and Victoria’s Secret. The workers charge that by using CRST, national retail companies are effectively underwriting the abuse of women workers. Shipping firms like CRST are major conduits in today’s online-sales economy.

“Most people don’t even know that women drive trucks,” said Anne Balay, Haverford College professor and author of “Semi Queer,” a collection of true stories by queer truckers. Desiree Wood, founder of REAL Women in Trucking in 2012, said, “They talk about their supply chain, human trafficking, fair trade, but do they even know what’s going on in their domestic supply chain?” (realwomenintrucking.org)