“The Cuba Caravan is always welcome at S.H.A.P.E.,” said the center’s director, Deloyd Parker, as he set out pitchers of tea and readied the microphone. “We have hosted the caravan for decades; we will always welcome you as this is your Houston home.” 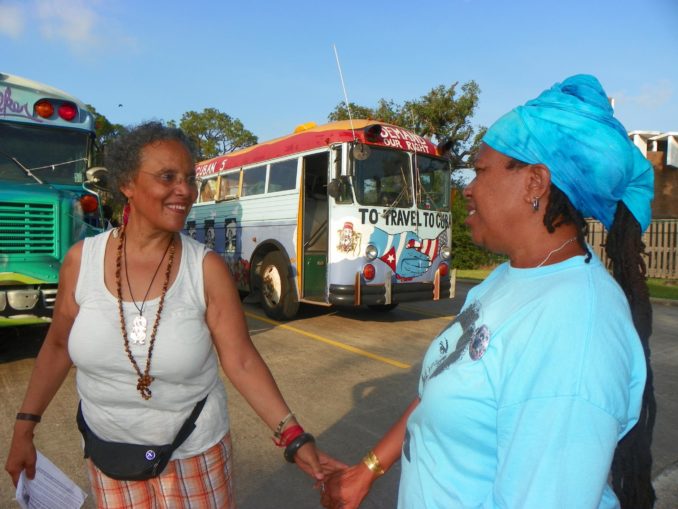 The Houston meeting was dedicated to the memory of Ayanna Ade (on left), here with activist Esperanza Martell , about to board the bus bound for Cuba.

The evening was dedicated to one of the Solidarity Committee founders, Ayanna Ade, who died in 2013.

Pacifica radio programmer Aka Holt and former Black Panther Bunchy Crear both spoke about Sister Ayanna as a larger-than-life photo of her sat at the head table.

“It was exciting to hear Ayanna talk about her trip to Cuba with Pastors for Peace. She loved it and was animated each time she spoke of another aspect of things that were happening in Cuba,” said Holt.

“Ayanna began her political life as a Panther and while in Oakland organized the Panther School for our children. She was a leader for the Panthers,” said Crear. “Her love for serving the people continued after she returned to Houston, becoming a midwife and delivering over 2,000 babies in this community. Working to build solidarity with the Cuban revolution was a priority for her.”

As the room filled with activists of all nationalities and ages, from teens to 87 years of age, each person took turns introducing themselves and giving one reason why they were attending the event.

“I love Cuba and have been several times,” said activist Gordon Anderson, who helped paint the yellow school bus that Houston organizers bought, refurbished and sent to Cuba a few years ago. “I want to keep up with what’s happening in Cuba despite the blockade and Trump’s new restrictions.”

“My grandfather loved Cuba, and now that he is gone, I want to learn more about what he loved. I want to go to Cuba and see it for myself,” said Siva Kone, a high school senior.

Special guests from the northwest U.S. and Alaska were brought by local Indigenous activist Bryan Parras. They were in Houston to raise awareness over potential oil and gas drilling in the Arctic National Wildlife Refuge and homelands of the Gwich’in Nation, peoples who have lived in northern Alaska and Canada forever. Their language names that area “The Sacred Place Where Life Begins,” which is also the title of a film by Miho Aida about the struggle to keep the land sacred and free from drilling. A Gwich’in representative invited everyone to join them the next evening for the film.

As S.H.A.P.E. member Ramond Thompson kept bringing in more chairs for stragglers, Waller presented information about the history of the Cuba Friendshipment Caravan, including why it travels to Cuba without a license, in defiance of U.S. laws. He explained that different U.S. presidents have tightened or relaxed rules regarding travel to Cuba: “People in the U.S. can travel anywhere in the world. People around the world can travel to Cuba, which gains a lot of its revenue from tourism. But only [the U.S.] denies people living here the right to go to Cuba.

“We must end the blockade. We cannot let our ability to see Cuba be left up to the whim of whoever is president. This cruel and harmful blockade must be ended now!” Waller told the crowd.

A potluck dinner was shared with homemade black beans, barbequed chicken and loads of delicious pies, cakes, cookies and strawberries brought by folks. The homemade arepas with all the fixings, brought by Rosie, La Reina Vegana, were a highlight.

After the event’s program, many people stayed for almost two more hours to talk with Waller and each other. The common topic of discussion was their desire to go to Cuba themselves on the very next Friendshipment Caravan!