In celebration, the Buffalo-Niagara Falls LGBTQ History Project sponsored a “Gay Liberation Reunion Panel” on June 27. Five of the many founders of the local Buffalo movement explained, to a standing-room-only crowd of over 100 people, what life was like for them in the city in the early 1970s. 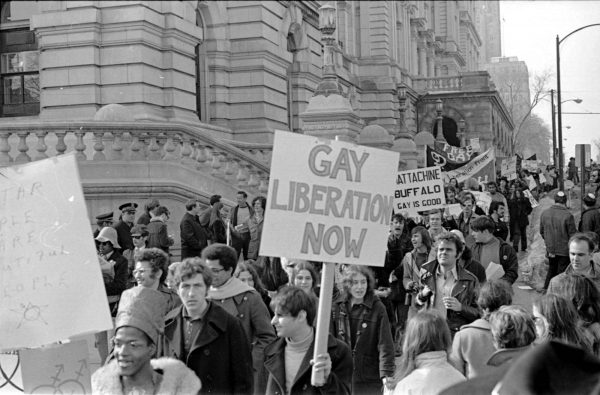 Buffalo’s Mattachine Society at the Gay Liberation March in Albany, N.Y., in 1971.

The panel emphasized that the LGBTQ2S+ movement in Buffalo was different from those in bigger cities like Los Angeles and New York, primarily due to Buffalo being a midsize, working-class, blue-collar city, which had a closely linked, complex and thriving, if closeted, community.

The panelists recounted the founding in the late 1960s of the Mattachine Society of the Niagara Frontier and the Sisters of Sappho, as well as the opening of what was the third largest LGBTQ2S+ center in the country. This space provided a social area for people to meet and hang out, as well as providing a suicide hot line, counseling service and activities. The Fifth Freedom, an early LGBTQ2S+ newspaper, was published in Buffalo for the Western New York region from 1970 into the early 1980s.

Members of the audience asked: “What prompted this community to be so bold?” The answer was: “We were tired of being harassed, beat up and arrested by the cops and other anti-gay people.” In response to the repression, the community fought back by founding its own organizations. That was a very brave thing to do at that time because if anyone was arrested, not only their names but their home addresses were published in local newspapers.

Panel members stressed that the struggles in Buffalo, as elsewhere, were linked to and inspired by the parallel women’s liberation movement, the Black and Latinx movements, and other struggles for liberation taking place during the same years, including the anti-war movement. In the discussion, it was mentioned that Workers World Party was the only left party to have an active lesbian and gay caucus.

There was so much more that needed to be said about the history of justice struggles in Buffalo, but the panel ran out of time. However, in a separate June 27 interview in the Qween City blog, WWP comrade Marge Maloney filled out some of the connections among struggles. Maloney, a lifelong workers’ and LGBTQ2S+ rights activist, was born in 1947 on the West Side of Buffalo to an Irish-Catholic working-class family.

She noted in the interview: “It was ‘69 when I joined the anti-war movement, and it just sort of flowed from my ideas about struggle and oppression. It was intersectionality before it had a word.

“I was beginning to have an inkling that I was destined to struggle, and so I joined Workers World Party, because they were, at the time, the only socialist party to have both a women’s caucus and a lesbian and gay caucus, both fully functional. I could be active in the gay community, and I could be active in the workers’ struggles. It just sort of worked beautifully.”

Maloney also gave more recent liberation history, recounting the joining of pro-choice and LGBTQ2S+ communities in the early 1990s to form Buffalo United for Choice, when anti-abortion forces descended on the city. She noted that the earlier gay liberation struggle built the foundation for community self-defense when anti-abortion forces came back to Buffalo in 1999 and targeted both women’s clinics and the LGBTQ2S+ community. Rainbow Peacekeepers, a group of about 100 people, came together to send groups of people out on the weekends to defend LGBTQ2S+ bars and clubs threatened by right-wing bigots.

In a video link at the Qween City blog, Mahoney recounts how participating in both those mobilizations was another LGBTQ2S+ activist and WWP comrade, Leslie Feinberg, who grew up and came out in Buffalo’s gay community, and whose now-classic trans novel “Stone Butch Blues” was set in the city. Feinberg’s ground-breaking Marxist history of transgender oppression and struggle, “Transgender Warriors” (1996), details Feinberg’s coming to political consciousness and activism within the dynamic movements in Buffalo.

“Stone Butch Blues” is now available as a free download at lesliefeinberg.net.