Over 500 Wayfair workers — clerical workers, engineers, product managers, visual artists and information technology workers — walked off their jobs at 1:30 p.m. on June 26 to protest company profits from sales to concentration camps holding im/migrant children at the border. The week before, a worker leaked that Wayfair had fulfilled an order for $200,000 worth of bedroom furniture to a detention camp for 3,000 migrant children in Carrizo Springs, Texas. 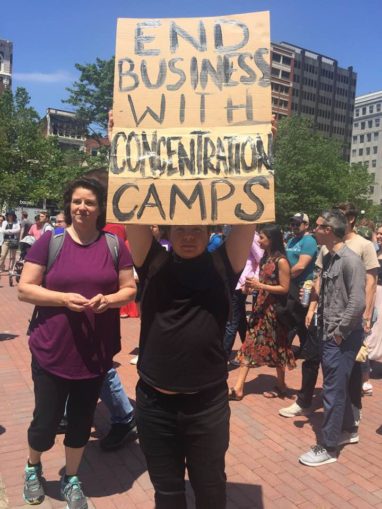 The predominantly young Wayfair workers received worldwide support when they walked out and told the employer, “We will not let our labor be used to support concentration camps for migrant children.” They walked out in response to exposés of the U.S. Border Patrol’s horrendous treatment of children in concentration camps on the U.S.-Mexico border.

Customs and Border Protection holds thousands of children, from infants to teen mothers, in filthy conditions. They don’t provide enough food or clean water, clean clothing, diapers, blankets, medical care or other basic needs. The children sleep on the floor in icebox conditions with lights on 24/7. (tinyurl.com/y3mnp3tg) They endure physical and sexual abuse, with no psychological support for trauma and depression.

The detention centers are supplied by contracted vendors. Wayfair’s $200,000 order was from government contractor Baptist Children’s Family Services, which operates a camp in Tornillo (near El Paso) that holds thousands of migrant children. Wayfair walkout organizers also discovered a previous $86,000 mattress order to another detention camp.

The most recent audit of care at the BCFS Tornillo facility by the Department of Health and Human Services showed serious problems, including failure to complete medical exams within the mandated 48 hours; failure to document the family reunification process; and failure to comply with state regulations regarding minimum bedroom space, health and safety standards and background checks on employees. (tinyurl.com/y42a82m9)

Within a day of learning of the sale to BCFS, more than 500 Wayfair workers signed a protest letter. The opening reads: “We, the undersigned, are writing to you from a place of concern and anger about the atrocities being committed at our southern border. The U.S. government and its contractors are responsible for the detention and mistreatment of hundreds of thousands of migrants seeking asylum in our country. We want that to end. We also want to be sure Wayfair has no part in enabling, supporting or profiting from this practice.”

Company executives stated, in a letter signed by co-founders Steve Conine and Niraj Shah, the sale would go through and directed workers toward the elections as a way to make change. Not happy with this answer, the workers held a town hall meeting inside the company June 25 with Conine. 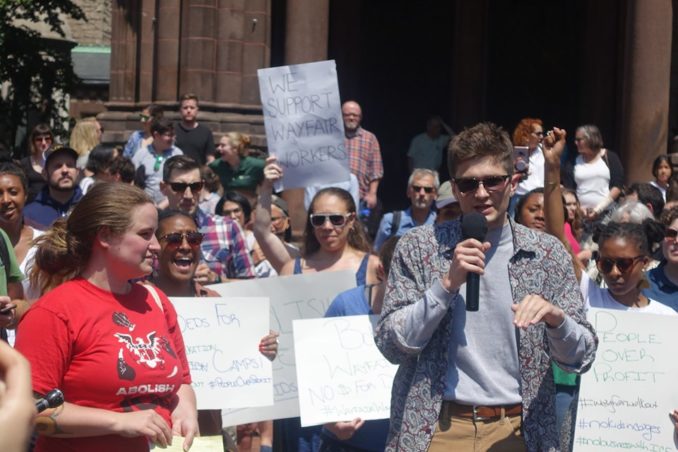 A.J., a Wayfair employee and walkout organizer, told Workers World: “[I]t was clear that management had no interest in dialogue, contrary to what they previously stated. Steve talked down to us and shamed us for considering a walkout. He refused to budge and committed to going through with the sale, despite the room being so packed by employees demanding an answer that the crowd extended out the doors. It was, at best, a PR move and we all understood that, once the meeting was over.

“They don’t want the workers to be able to monitor their ethics and cut into their profit. Walking out was the only way we could show management we were committed to preventing Wayfair from doing business with organizations like these in the future.”

Workers demand Wayfair donate the profit from the challenged sale to specific organizations doing work at the border to help migrants and account for the harm the sale caused. Shortly before the walkout, Wayfair stated they would donate $100,000 to the American Red Cross, which was not on the organizers’ recommended list.

Workers walk out in solidarity

Many Wayfair workers who stayed inside watched the rally on live stream.

“Before the walkout, what I saw through the media made me feel as though we had the support of most of the public. There was no better confirmation than walking out of our office and into the arms of a crowd that had amassed in solidarity,” said A.J.

Workers made signs from materials at hand: copy paper, cardboard and packing material. Some of the signs read: “A prison with a bed is still a prison,” “A cage is not a home,” “End biz with concentration camps” and “Solidarity with migrant families.”

Many workers were visibly tense about speaking at the microphone, as losing their jobs was a real possibility. Wayfair workers do not have a union to provide any protection for work actions, and most had never spoken publicly.  But one by one, encouraged by the emcee and by the roaring crowd, young workers stepped forward to speak. The theme that echoed throughout was “No profit from detention camps.”

A political strike to defend migrants

When asked about the importance of showing solidarity, A.J. replied, “We hope that taking action like this might set a precedent and push other workers to demand their employers stop servicing contracts or selling supplies to ICE [Immigration and Customs Enforcement] and similar agencies. We also refuse to work for an organization that generates profits off the violence done to migrant families.”

Wayfair organizers plan to send another letter to management restating their demands, one of which is to create a code of ethics to prevent sales like those to detention camps. They ask supporters to continue pressuring the company.

The walkout shows that political consciousness among workers is on the rise. Wayfair workers transformed that consciousness into concrete solidarity and defense of the international working class. Lacking the protection of a union, they risked being fired, harassed or retaliated against. The walkout became their weapon.

This was a political strike, reflecting growing class consciousness and the realization that workers can exercise power for the good of their class.

Despite the many walls put up to divide workers, these walls can be broken down and a hand of solidarity extended.