Farmworkers in New York state have won three historic victories in the last month through valiant worker-centered leadership and steady support from allies. In Syracuse, the driving force came from the Workers Center of Central New York (WC-CNY), a membership-based organization of low-wage workers advocating for and organizing workers to improve working and living conditions in Central and Upstate New York. 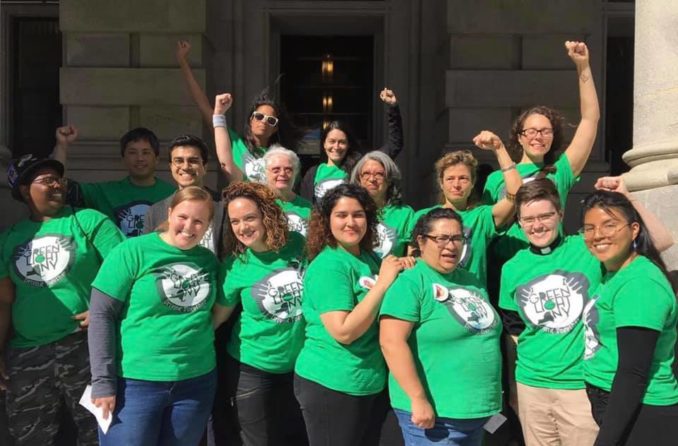 Fifteen members of the “Green Light NY Driving Together” campaign celebrate their successful civil disobedience action in Albany on May 21.

On May 23, a New York appellate court finally invalidated a 1930s’, Jim-Crow-based state law that denied farmworkers the right to organize, even though that right was included in the state constitution. The American Civil Liberties Union argued the suit against the state. (For more on the racist origins of the bill, see tinyurl.com/yynp866k/.)

The WC-CNY and member Crispin Hernandez filed the suit, together with the Workers Justice Center of New York. Hernandez was fired from his job at Marks Dairy in Lowville, N.Y., in 2015, when he began organizing with other workers after work hours.

At 16 he began a job at the dairy, working 12-hour days, seven days a week, with no medical assistance — even when a cow stepped on his hand, mangling it. Worker housing was bug-infested with broken windows. Inferior management-provided boots and gloves exposed workers to dangerous chemicals.

Agricultural work in New York state is big business. Many workers are undocumented immigrants, particularly vulnerable to exploitation, making organizing even more difficult. When Hernandez and other workers began to meet with WC-CNY, management called local and state police on them. But with the encouragement of WC-CNY organizers, Hernandez persisted and filed suit in 2016.

Thousands of farmworkers live in Central and Upstate New York in isolation, with limited access to transportation. They have no way to get to a doctor, no way to get groceries, unless by paying exorbitant fees to informal local “taxi” drivers.

If they drive without a license, workers are vulnerable to racist profiling stops by local police, followed by arrest and subsequent deportation for this “crime.”

For years WC-CNY and other immigrant rights groups have leafleted, demonstrated and even committed civil disobedience to get access for undocumented workers to drivers’ licenses. The campaign was called “Green Light NY Driving Together: Luz Verde NY Manejando Juntos.”

On June 17, a second historic farmworker win was passage of the Driver’s License Access and Privacy Act — the “Green Light Act” — by the state Senate; it was signed into law the next day by Gov. Andrew Cuomo. The act restores the right to obtain a license, regardless of immigration status, that existed in the state prior to 2001.

Senator Luis Sepúlveda, who sponsored the bill, said to New York’s undocumented community: “We see you. We welcome you with open arms. You are here, and today we give you the right to move freely around this state without fear.” (dream.info)

Despite these welcoming words, anti-immigrant hostility and persecution are still alive in New York state government, as they are at the federal level. County clerks in Erie and Oswego counties have declared they will refuse to process the new licenses. (See related story from Buffalo, N.Y., in this issue.)

The May 23 court victory in Crispin Hernandez’ suit provided impetus for a third farmworker win. On June 19, the Farmworkers Fair Labor Practices Act was passed by the state Senate. Passage of FFLPA was historic; the bill had been tied up in the Senate for 15 years!

WC-CNY played a crucial role in passage of the bill, organizing on the ground, holding rallies and protests, and helping workers make complaints about health and safety issues at their jobs.

The WC-CNY goal for the bill was codification of farmworkers’ rights on an equal basis with other state hourly workers, especially regarding issues like overtime pay and a day of rest.

However, the powerful New York Farm Bureau, which mounted a furious campaign against the worker-initiated court suit, continued to fight a bitter rear-guard action to limit protections given to farmworkers in the FFLPA.

The result is a flawed bill that Rebecca Fuentes, a lead organizer with WC-CNY, recognizes as “a great step forward in having the ability to organize and advocate for the rights and well-being of farmworkers,” with “new legal protections that have been so long in coming.” (WC-CNY press release, June 20)

But, in a June 20 Facebook post, Fuentes noted there are inequities in the bill: “Several issues in that bill are not good for workers, starting with making a strike, stoppage or a slow down an ‘unfair labor practice.’ Also, overtime is set at [over] 60 [hours], not at 40. Unemployment insurance was taken away from guest workers with this bill.”

In a June 20 press release Fuentes expressed hope that a wage board created by the law would act quickly in lowering the threshold from 60 hours  for farmworkers to get overtime. “This is a matter of equity and fairness,” said Fuentes. “Those who labor in the fields, orchards and dairy barns work hard and deserve the same rights as others. It’s time New York State does the right thing.”