The Laundry Workers Center, alongside groups like the People’s Power Assemblies, held a picket line June 22 in front of the Sunshine Shirt Laundry Center in Bay Ridge, Brooklyn, N.Y. This emergency demonstration was called after the laundromat decided to fire the workers after telling them they were closing up shop. But the laundry was in fact not closing and is still receiving clients.

The two workers, Ricarda and Maria, are owed $200,000 in back pay from chemical burns, physical abuse and wage theft. The firings are an obvious form of retaliation against the workers who spoke up and demanded fair wages and safe working conditions, and because the workers and the community have been pressuring the laundry every week with demands for the back pay. 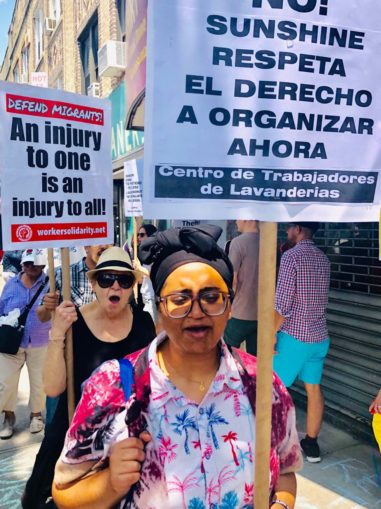 Management has definitely been feeling the pressure. That is what led to one of the workers, Ricarda, being physically assaulted by the landlord of the laundromat while passing out flyers in the community.