Domestic caretakers, nannies and house cleaners are, like farmworkers and people with disabilities, excluded from many local, state and federal workplace protections, including minimum wage, overtime and health, safety and sick benefits. 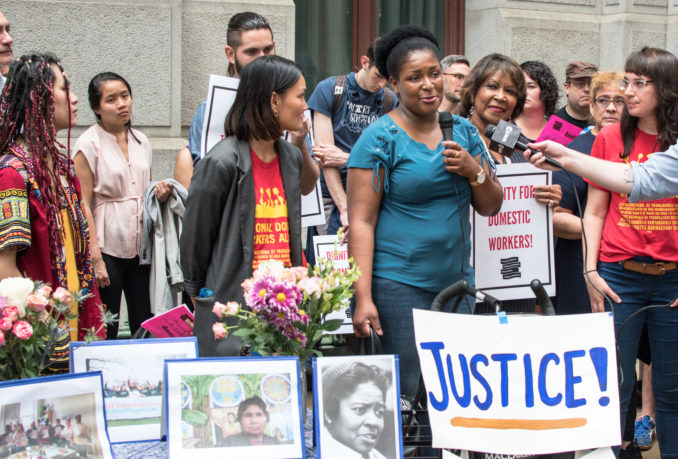 As mostly women of color, domestic workers are subjected to all the abusive sexist and racist horrors so common within the U.S. patriarchal, white- supremacist, capitalist system. Mostly immigrants and often undocumented, they work in highly responsible yet difficult jobs for low pay and are often under threat of deportation at a moment’s notice.

Like many gig workers, domestic workers are isolated from thousands of other workers doing the same work, and they are forced to deal with ever-more-demanding bosses as individuals.

Despite such harsh working conditions, courageous domestic workers across the U.S. are making significant strides to get Domestic Worker Bill of Rights (DWBR) legislation passed. Those protections they hope will ensure respect, professionalism and safety on the job for millions of workers. Seven states (New York, Massachusetts, California, Connecticut, Illinois, Nevada, Oregon, Hawaii and New Mexico) and the city of Seattle have already extended DWBR protections to domestic workers. According to the National Domestic Workers Alliance, over 2 million people in the U.S. do domestic work. There are 67 million domestic workers worldwide, according to the U.N.’s International Labor Organization.

Philadelphia is home to an estimated 16,000 domestic workers who make an average of $10,000 annually, according to analysis by University of Pennsylvania professor Pilar Goñalons-Pons.

A nanny and member leader of the Pennsylvania Domestic Workers Alliance (DWA), Annie Johnson wrote in a March 4 guest editorial in the Philadelphia Inquirer: “We don’t get the basic labor protections other workers do. We don’t qualify for minimum-wage and overtime protections. We aren’t protected by the federal Civil Rights Act, which governs gender and racial discrimination.

“We don’t get workplace safety protections. We don’t have the ability to unionize. And we’re not protected from retaliation if we do speak up about the ways we’re abused and taken advantage of. It’s no mistake we’re denied these basic protections — it’s part of the enduring legacy of slavery. Domestic workers and agricultural workers were left out of 1930s’ labor law because the vast majority were Black descendants of slaves.

“This means that, in the poorest major city, we are among the lowest paid and most exploited of the working poor. The vast majority of us are women of color — Black and immigrant women, many of whom are undocumented. Domestic workers frequently experience wage theft, verbal abuse, sexual harassment, threats to call [Immigration and Customs Enforcement] if we speak up about our working conditions, daily instances of racism and prejudice and employers who refuse to pay and who barge into living quarters after work hours are done for live-in nannies and caregivers.” 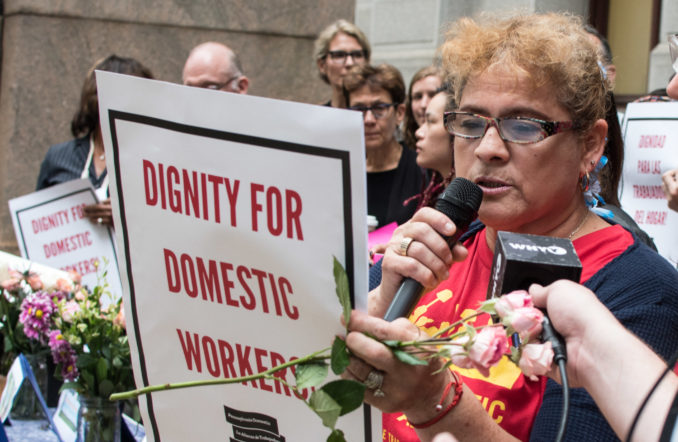 On International Domestic Workers Day, June 20, about 50 Philadelphia-area domestic workers and their allies rallied outside City Hall. After hearing speeches from domestic workers and several City Council supporters of the bill, they entered City Hall where DWBR legislation was officially introduced. The bill will go up for a vote this fall. Once passed, Philadelphia would not only be the largest city to do so, it will also be the most ambitious standards-raising law on the books across the industry.

The bill would mandate:

A Domestic Work Working Group will meet this summer to develop a proposal for a Domestic Worker Standards and Implementation Board to monitor enforcement and regulation.

Nicole Kligerman, executive director of the Pennsylvania Domestic Workers Alliance, told the Philadelphia Inquirer she expects the board to create “template contracts” for workers. If an individual doesn’t have a contract, it will be presumed they’re working under the city’s template of minimum terms. (June 20)

The rally ended with a chant the DWA use at their events; everyone starts in low voices chanting “Unity!, Dignity!, Power!” over and over, increasing in volume each time, and finally ending in one loud voice: “Unity! Dignity! Power!”