Friends of revolutionary Cuba gathered at the Berkeley Fellowship Hall in the Bay Area on June 18 to celebrate the 30th anniversary of the Pastors for Peace Cuba Caravan, which has consistently broken the U.S.-imposed blockade on that country. The evening was sponsored by a coalition of groups, including Task Force on the Americas and the International Committee for Peace, Justice and Dignity. Along with the Venceremos Brigade, which just celebrated its 50th anniversary, the Caravan provides humanitarian aid and support to the Cuban government. 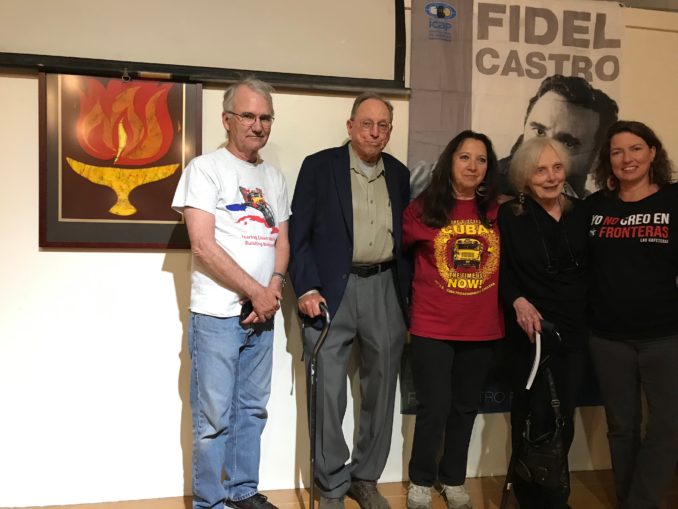 The event featured two special guest speakers. Catherine Murphy, a San Francisco-based filmmaker who produced the well-known film “Maestra” about the 1961 Cuban literacy campaign, represented Pastors for Peace. A Cuban educator, who was the youngest participant in the literacy brigade, also spoke. The educator has worked for nearly 60 years since the brigade, as an activist and then as a teacher, supporting the revolutionary process in Cuba.

The Cuban educator recalled the campaign with great fondness. “I was the youngest child in the campaign, and it was all made possible because of the work of the entire Cuban people,” she noted. “Everyone had a role to play and this was the foundation of our entire education system.”

Both featured guests emphasized that education at every level, as well as health care, are completely free in Cuba.

There was much discussion about the U.S.-enforced blockade of Cuba and how harmful it has been to the Cuban people. Recent actions by the current U.S. administration will make it harder for people to travel to Cuba and almost impossible for people to visit the U.S. from Cuba. With the signing of recent activation of Title III of the Helms-Burton Act, counterrevolutionary Cubans and U.S. businesses can now lay claim to property that they “owned” (or stole) prior to the revolution.

Allies of Cuba were urged by Murphy and other speakers to visit Cuba soon and show their support. The evening’s special Cuban guest was optimistic about her country’s continued support of other struggles and peoples around the world. “With what little we have, we have always shown others our solidarity,” she said.

From Haiti to Venezuela, from Angola to Palestine, the people of the world have reached out and embraced this revolutionary solidarity.

Editorial note: Recent threats against Cuba by the Trump regime made it necessary to withhold the name of the Cuban educator who spoke at this West Coast fundraiser.