Haiti is the poorest country in the Western Hemisphere. An audit, ordered by a Haitian court and released the end of May, found that between $2 billion and $4 billion in funds generated by Venezuela’s PetroCaribe oil-purchasing program were lost due to corruption during the two years Jovenel Moïse of the Bald-Headed Haitian Party (PHTK) has been president. 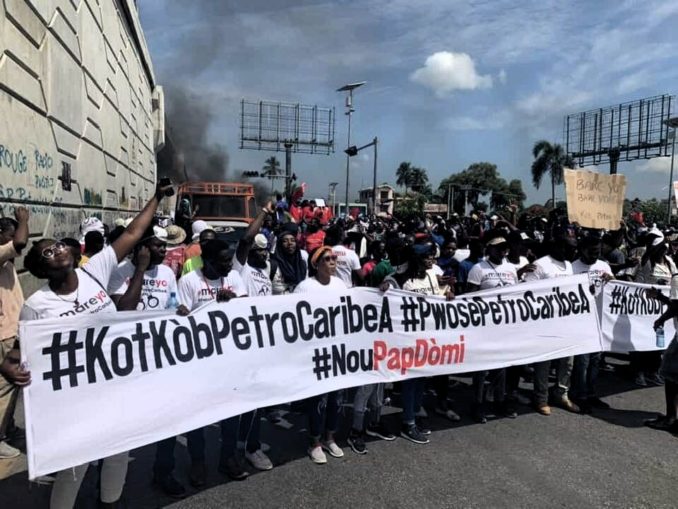 In Port-au-Prince, June 9, Haitians on general strike demand to know: “Where is the PetroCaribe money?”

But it wasn’t just corruption that drew hundreds of thousands of Haitians into the streets throughout the country on June 9. Inflation has chewed up big chunks of income of the 60 percent of Haitians living below the poverty line ($2.40 a day). According to the World Bank, inflation is currently 15 percent.

Jerry Tardieu, who represents the relatively well-off community of Pétionville in the National Assembly, made the point in a June 12 AlterPresse interview that when Moïse became president, 66 gourdes (Haitian currency) could buy one dollar; now it takes 100.

The nationwide demonstrations June 9, which took place in Cap Haïtien, St. Marc, Jacmel and Gonaïves, as well as Port-au-Prince, the capital, had a single demand:  President Moïse resign and go to jail along with his cronies from the PHTK.

In Port-au-Prince, according to the June 12 Haïti-Liberté, “[O]pposition figures and radios reported at least seven killed and over 100 wounded by gunfire from police and government-aligned gangs.” The march began peacefully,  but when it reached the area around the Champ de Mars and the National Palace, the cops attacked.

On June 10, Radio France International reported that the cops used live rounds, while two buildings were set on fire. YouTube video clips show the demonstration breaking into smaller groups that scattered over the area around the National Palace.

The French embassy, a supermarket and a big movie theater were some of the targets singled out by protesters.

Then on June 10 and 11, Port-au-Prince was almost completely paralyzed by a general strike that shut down public transportation and most businesses, banks, schools, factories and government offices. According to Yves Pierre-Louis, news director of Radio Timoun, which is housed at the Aristide Foundation for Democracy, “[F]or these first two days, we can say the strike succeeded close to 100 percent.”

The general strike involved street barricades made from burning tires, rocks and billboards.

Since this is the time of year that Haitian schools conduct exams, teachers and students who went on strike were risking a semester or, in some cases, a year’s worth of school work.

It is clear that certain significant bourgeois figures are now in opposition to Moïse and his cronies, who most certainly have been rejected by the masses of the Haitian people. Given that the United States was so involved in selecting Haiti’s president, its conduct in the current struggle is going to play an important role in the outcome.