Wage. Time. Respect. That was the motto of the 24-hour “Women’s Strike” for gender pay equity, equal rights, respect and an end to gender-based violence, which swept Switzerland on June 14. Hundreds of thousands of women and people of all genders from labor unions, women’s rights and allied groups, educational and faith-based institutions, and even farms marched, rallied and struck. 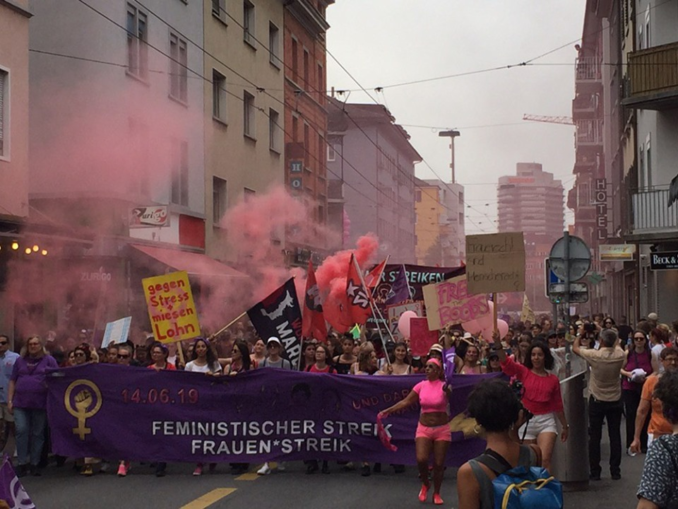 Colorful banners flew from bridges and buildings in major cities. The color purple was visible everywhere, including in clothing, because of its symbolism with European women’s suffrage movements. Women in Switzerland could not vote until 1971.

In Bern, the capital, 100,000 people demonstrated, while workers struck in factories. There, Rachel Luthy stressed: “We must fight for equal pay … abortion rights, zero tolerance for domestic violence and more. Most importantly, we must smash the patriarchy!” (New York Times, June 14)

In the country’s largest demonstration, 160,000 people marched in Zurich, a global center of finance capital. Organizers there welcomed women, trans, intersex and queer people, immigrants and those of varying ages, communities, abilities and incomes. In Basel, 40,000 people participated in 50 activities, while actions took place in all major cities and towns.

Many women struck for the entire day, but organizers asked those who couldn’t do that to leave their workplaces at 3:24 p.m., because women work for free after that time due to wage inequality. Women earn 20 percent less than male workers — an outrage in one of the world’s wealthiest countries. It’s even worse for immigrants.

The World Economic Forum ranks Switzerland 44th in wage equity for similar work, compared with all other countries. (npr.org, June 14) What enormous profits the capitalists are making by cheating women out of their full salaries!

It was exactly 28 years ago that 500,000 Swiss women held a historic strike for equal rights. That resulted in passage of the Gender Equality Act in 1996, which prohibited workplace gender discrimination.

In 2018, the Swiss Parliament enacted a law calling for corporations to “study” gender pay disparities, but that only applied to companies with over 100 employees.  It didn’t include penalties for firms that flouted the law.

Women labor leaders called the law “meaningless.” It so enraged women that they then began planning a national protest. Labor unions got involved, and USS, an umbrella group of 16 Swiss unions, was instrumental in organizing the June 14 strike.

As the cost of living skyrockets in Europe’s worst “family-friendly” economy, and gender pay inequality grows, this struggle will continue.